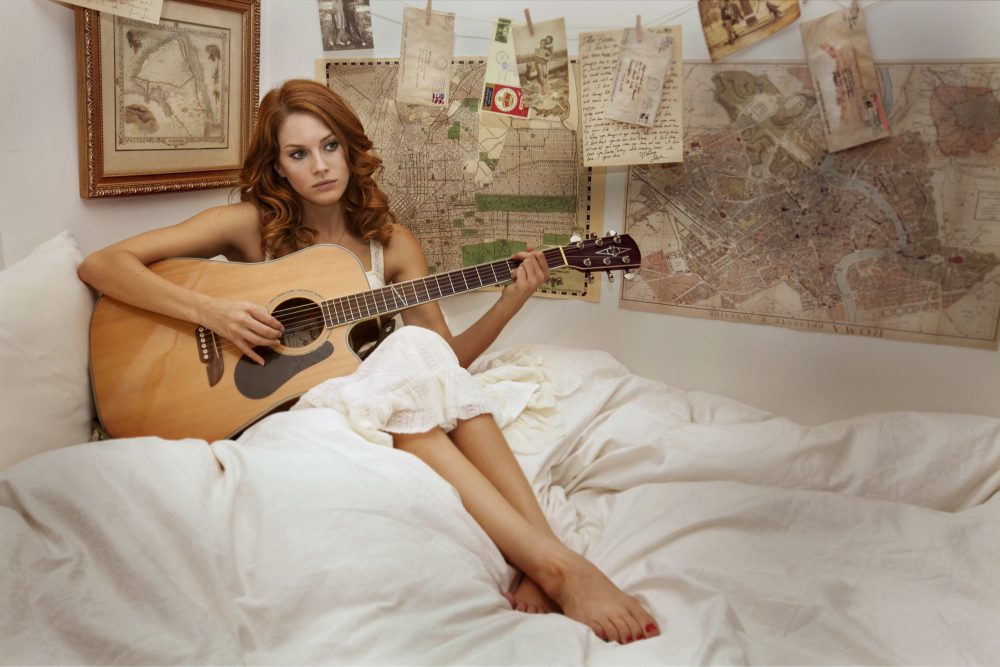 Stephanie Lynn may seem like another sweet girl-next-door at first glance, but after listening to her music, you see that this actress and singer-songwriter is so much more than meets the eye.
An eclectic blend of folk-pop Americana, her songs are filled with raw stories and emotions that draw you into the world of this “Green Mountain Girl.”  Stephanie grew up in an old farmhouse in Vermont, the “Green Mountain State,” and was raised with an appreciation for nature, healthy living, and smiling at people.  Always politically minded and earth conscious, Stephanie aspires to effect positive change in the world through her art by tapping into and expressing the more complicated aspects of the human experience.

Stephanie started her music career singing acapella at the University of Pennsylvania.  Her first song release was part of a campaign to raise money for Vermont Long Term Disaster Recovery following the devastation caused by hurricane Irene.  Also an actress, she is seen on CBS’s “How I Met Your Mother” and NBC’s “Castle.”  Stephanie can also be found singing and running across the country in the national Nike ad campaign “I Would Run to You.”

In addition to being a singer-songwriter, you are also an actress.  How do you balance your music with other obligations such as acting?
I don’t sleep, haha.  So far I have been able to make time for both careers, and they often spring board off of each other.  Even when my crazy to-do lists overwhelm me, I somehow find time to create – I guess when you truly love something, you just make time.

There is a great deal of competition in both fields of your career – music and film industries.  How do you maintain a positive attitude and keep motivated to follow your dreams as both a musician and actress?
There are days when I kick and scream and want to quit SO badly, because something will come up that feels like yet another hurdle.  But then I remind myself that nothing worth it is ever easy, and I look to see how the hurdle is actually an opportunity for something new.  I write a lot about water, and I think I am very drawn to it because it is so symbolic of life – unpredictable and always rising and falling.  The best advice I was ever given was from a woman named Candace Silvers who told me that the waves will always go up and down and the key is to learn to walk on.  I always strive to focus on what I am grateful for and on why I do what I do – because I love it and I have stories I want to tell.

What led you into playing guitar and writing your own lyrics?
I have been singing and writing songs for as long as I can remember.  I used to sing ideas into a tape recorder when I was six years old.  I started learning the guitar and really threw myself into my song writing when I was living in New York City after I graduated from the University of Pennsylvania.  I was trying to decide whether to go to law school or to be true to myself and follow a career as an artist.  I spent a lot of time walking around the city feeling lost and found solace by escaping to write songs on my rooftop.  I currently write or co-write all of my songs. I also play guitar, a bit of piano, and am learning the mandolin.  I grew up playing the flute, but haven’t picked it up in a while – kind of hard to sing and play flute at the same time!

You dedicated your first song release to aid in a campaign to raise money for the Vermont Long Term Disaster Recovery
Growing up in Vermont shaped who I am in so many pivotal ways, and it will always be my favorite place on earth.  I had been working on my first EP at the time when Vermont was hit by tropical storm Irene, which devastated my tiny state.  I wanted to do something to help and so, I wrote a song and made a video with hopes that it would create awareness about the disaster and encourage people to give their support.  It was amazing to me that so few people outside of Vermont knew how badly VT had been hit and how extreme the damage.  I’m happy that I could contribute to the rebuilding in some small way, and I was also so grateful to find out that some of my fans gave large donations to Vermont Long Term Disaster Recovery.

Do you have a particular song of yours that you are most proud of or that has special meaning for you?
That is a tough one!  Every song has special meaning for me, because they are all written from my heart about my life and experiences.  Depending on what’s going on in the current moment in my life, I am more connected to different songs at different times.  Singing is how I express the things I don’t know how to speak.

What would you likely be doing or pursuing if you weren’t in music and film?
I am a storyteller, and I am on this planet to create art.  If I weren’t in music or film I would be painting or creating something somehow.

Tell us about your Nike Ad Campaign “I Would Run To You,” and what all was involved in making this?  How much did you actually run in the making of this ad?
The Nike campaign was so much fun to do!  I got to work with a fantastic team of people, doing the two things I love most – singing and acting.  It was a long shoot – more like a short film than a typical commercial shoot.  We shot in LA, around St. Louis, and in New York, then, back to LA to record the song.  I did have to do quite a lot of running.  Some of the shots required me to run a quarter mile or so and we had to do many takes, so you can imagine it added up by the end of each shoot day.  I enjoyed every moment of it! Is running your sport, or do you have another favorite activity you do to keep fit?
I love to do anything outdoors.  I do a lot of hiking, running, and swimming.  I am even learning to surf.  I also love to do pilates and yoga to stay lean and keep my body in alignment.  Being active is a huge part of my life.What is your diet like, and what is your favorite food to splurge on occasionally?
I love healthy food and don’t believe in depriving myself of things I like – anything in moderation.  I try to eat several small meals throughout the day with a lot of fresh veggies, lean meats and fish.  I avoid eating unnecessary carbs and try to stick to sprouted, whole-grains.  My favorite splurge is dark chocolate, and I also love the occasional fro-yo run.

Is there any particular famous musician that you admire?
I grew up listening to my parents records and fell in love with Joni Mitchell, Carly Simon, and Tracy Chapman.  They are all amazing beyond words, and I especially admire Joni Mitchell for her songwriting and incredible musicianship.  A current musician that I love is Ingrid Michaelson.  She is a fantastic songwriter –creative song production and amazing storytelling lyrics.  I also admire how she presents herself as an artist: always classy.
Out now, Stephanie has released her new single “Easy Love” (feat. TJ Stafford)
Actress & Singer-Songwriter Stephanie Lynn was last modified: August 24th, 2017 by Sasha Frate