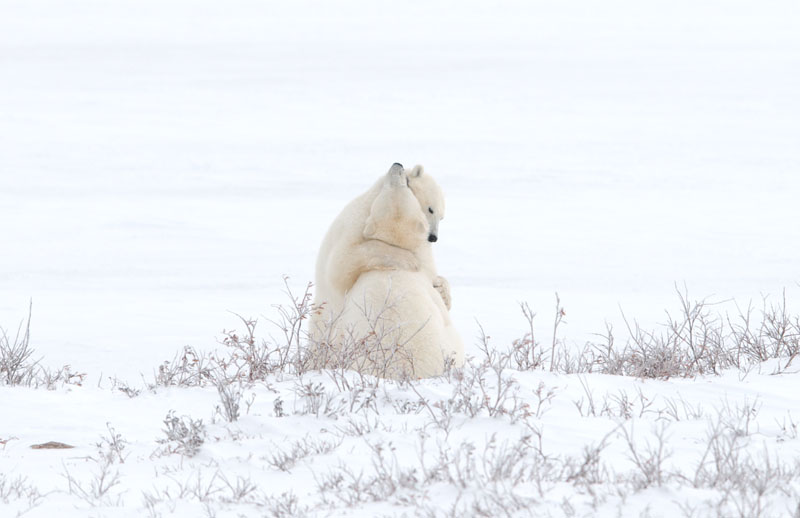 In their glistening icy habitat, the polar bear reflects an unearthly beauty. Their home rings the Arctic Circle and includes parts of Canada, Russia, the United States (in Alaska), Greenland, and Norway. As ice retreats, polar bears, or Ursus maritimus, have become synonymous with focusing our collective attention on climate change, but their ability to generate interest in ecotourism may be just as critical.

This Face the Current Travel Feature is published in Issue 27. Order PRINT here, SUBSCRIBE to digital membership for unlimited access, or continue reading this article below.

The Ongoing Loss of Sea-Ice Habitat

Sea-ice loss due to climate change remains the primary threat to the species. Every fall, bears gather and wait for the waters to freeze so they can venture out onto the ice to hunt for seals. If the extent and thickness of the sea-ice continues to decline at recently documented rates, the size of the polar bears’ hunting platform will be greatly reduced. As a consequence, killer whales could move into polar bear habitat, consuming the seals and replacing the bears as the new dominant marine mammal.

Regardless, the loss of solid sea-ice has led to uncomfortable incursions into human-inhabited areas as the bears seek alternative food sources, and this has created a credible threat to public safety. Conditions like this have convinced countries around the world that polar bears are in trouble. In fact, they’re considered threatened in the United States, of special concern in Canada, and vulnerable internationally.

Generate an accurate count of how many animals are still in the wild is difficult. According to the International Union for the Conservation of Nature (IUCN)—the global authority on the conservation status of wild animals and plants—current polar bear populations range from 22,000–31,000, with 60-80% of the bears residing in Canada. While many continue to lump all polar bears into a single-species group, in reality, the success or failure of a single subpopulation indicates little about the health of another one. Of the nineteen subpopulations that make up that worldwide estimate, the IUNC stresses that data on the number of bears, their health, or both, are lacking for at least ten of those populations.

Compounding the estimate issue is the fact that polar bear populations range across international boundaries and over hundreds of kilometers of forbidding ice and frigid open water. Polar bears can also dig into dens or camouflage themselves on snowfields, making it difficult to achieve accurate data collection.

In addition, mark-recapture studies in which bears are tranquilized are controversial. Drugging bears is dangerous for everyone involved, and indigenous people such as the Inuit object to such contact since drugging and physically handling bears stresses the animals and runs counter to their traditional beliefs.

The Bears are Successfully Connecting People to Nature

People are rightfully worried about the polar bear’s future. This can be seen in the current surge in tourism centered around the desire to witness these creatures in their native habitat and not as green, algae-covered novelties in a zoo. While human intrusion into any animal’s habitat is controversial, conscientious, respectful ecotourism can enlighten and inspire visitors.

But the ability for ecotourism to succeed doesn’t rest solely with the locals. The emphasis must be placed upon ourselves, the ecotraveler. It is incumbent on us when we plan our adventure to ensure that the tour or guides we select are dedicated to the values of conservation and responsible travel. This commitment means minimal impact on the delicate environments we have the privilege of visiting, while contributing to their protection.

No travel will have zero-impact on an environment, but ecotourism can have a positive effect. It helps local communities earn vital income and encourages residents to recognize the long-term advantages of polar bear conservation. But perhaps most important, seeing is believing. And once people see it, they return home understanding the necessity of safeguarding polar bears and their Arctic wilderness.

Churchill: The Polar Bear Tourism Capital of the World

Adaptive management in places like Churchill, Manitoba work to ensure that recreational activities don’t have a negative impact on polar bears and other Arctic wildlife.

While Churchill is known for two festivals—Le Festival du Voyageur (a large winter festival) and Folklorama (a food and cultural festival), it is now known as the Polar Bear Tourism Capital of the World. What helped Churchill earn this title, is its geography. The town’s western Hudson Bay location supports a rich marine ecosystem that promotes a healthy population of seals, the polar bears’ primary food.

The bears’ main feeding period ends in July, when the ice breaks up and the bears return to land areas to fast until the ice re-freezes in late fall. Churchill’s location, and its relatively shallow water, provides an ideal environment and one of the first places to experience a rapid freeze-over by late-November. If you are a polar bear, this is the place to be to wait for frozen water and your first meal in months!

These types of critical habitat areas provide the ultimate locations for human-wildlife interactions. And despite an average winter temperature of about five-degrees Fahrenheit during the three- to four-month tourist season, more than 12,000 converge on this town of fewer than 1,000 residents to see birds, beluga whales, and polar bears. Guests come for the polar bears, but they end up learning about the community, the indigenous culture, and the environmental issues affecting the region.

Be warned however: Churchill isn’t a budget-friendly destination. It’s not easy to get to, but if you want to check-off polar bear sightings from your bucket list, this is the place to do it. If you are thinking about planning your trek, you had better do it soon. Many of tours, especially those sponsored by international conservations agencies have an 18-month waiting list!

If you do go, here are some tour companies you may want to consider:

Because of their commitment to environmentally friendly travel, Natural Habitat Adventures has been the World Wildlife Fund’s exclusive conservation travel partner since 2003. They guarantee their small-group adventures will safely and comfortably get you closer to more polar bears than any other tour group.

Churchill Wild boasts four luxury eco-lodges, three of which are located deep in the heart of polar bear country on the Hudson Bay coast. They specialize in ground-level walking tours through the polar bear inhabited regions of Arctic Canada—you can walk with polar bears and have dinner with them, too!

Frontiers North Adventures is a family business that has been operating in Canada’s North for three decades. All of their tours are responsibly designed to protect the fragile natural habitats and to benefit local communities while preserving and celebrating the customs and traditions of the places they visit.