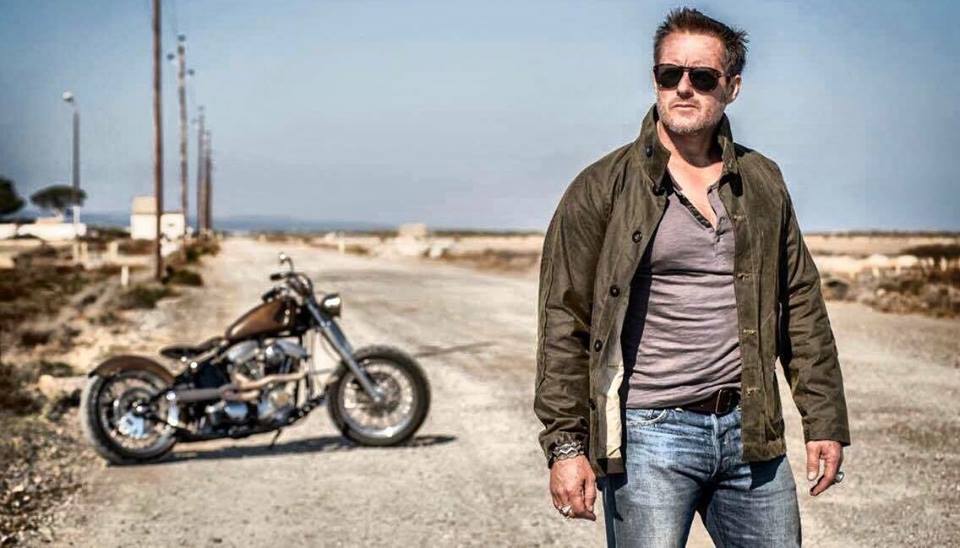 Patrice Cols is a guy who has been humbled by his life’s circumstances and people that have come into his life along the way.  He hasa tough guy appearance with his built physique, his love of motorcycles, and playing roles like that of Russian mobster Anton in the Nicolas Cage film “Rage,” but he’s actually a funny and sincere guy who appreciates close friends and the honest hands that have helped guide him in a positive direction.  Born in Paris, France, Patrice was raised half the time in an orphanage and half the time by his ailing grandparents.  He aspired to become a baker at a French Boulanger-Patisserie school, but meeting someone at age 14 gradually steered Patrice in a positive direction, away from his small life in a bad neighborhood.

His friend was 45 when they first met, but he had been diagnosed at 18 with Muscular Myopathy and was told by his doctor that he should’ve been dead by age 30.  He encouraged Patrice to improve his own life with exercise, telling him that he was only still alive with this disease because he exercised often when he was young.  Patrice told him that he would love to go to the gym, but admitted he could barely even afford to eat every month.  His friend had a family, he was not alone, but he was determined to invest his time into helping Patrice change his life.  He told him he would pay for the gym, food and supplements every day until he could begin to manage his life on his own.

After about three years, Patrice began to compete with the help of his friend, winning “Mr. France” at age 18 and placing 2nd in the world championship at age 19. The first time he brought his friend to his competition in the world championship, his friend told Patrice that he had achieved his dream for him. After some time, at about age 25, Patrice became world champion, but his friend passed away a month before this accomplishment. Patrice stopped everything and buried it in the coffin with his friend, and the devastation at the loss of his friend drove him back to the wrong path.  He became a bouncer at a dirty club where he went through a period of fighting and spending time with dangerous people. After being shot at in attempt to kill him on two occasions, Patrice realized he needed to change his life again. He took up modeling for magazines and went off to school in Los Angeles and later Paris for acting, which led him to his acting career today.

You look amazing for your role as Russian mobster Anton in the Nicolas Cage film “Rage.”  What were your fitness and nutrition aspects of training like for this role?

Typically in France, you don’t need to be muscular for a character, and normally I don’t go to the gym, but instead do exercise like TRX, practice Pencak Silat in the park in Paris, ride stationary bicycle, and mountain bike.  When not preparing for a role, I try to train like this all the time.  The only thing I need is diet and to use my own body weight to train, such as with TRX.  I also try to be on a diet, which for me means avoiding alcohol, fat and sugar during the week, and on the weekend I eat and drink badly and smoke a cigar.
My training for this role consisted of one time a week in the gym which consisted of 2 hours of circuit weight training upper body biceps, triceps, and shoulders, 4 x a week of Pencak Silat, 4 x cardio mountain biking, and back, chest, and arms with TRX 3 x a week for a period of about two months. 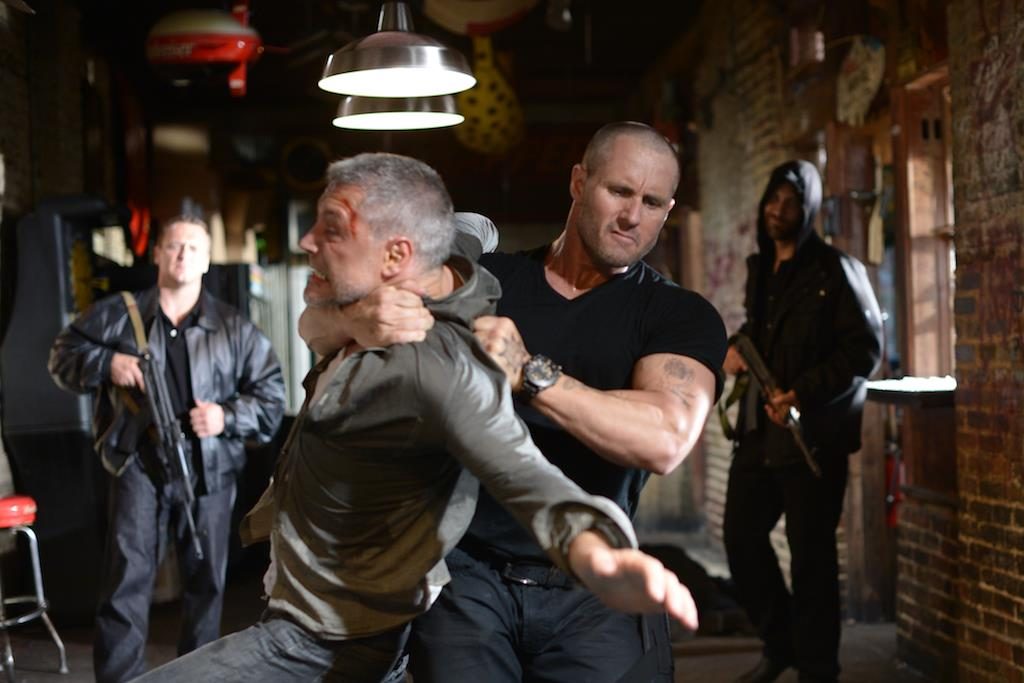 Did you do any specific training to prepare for your fight scene?
Not for this role, because I’m training all the time like this with Pencak Silat.  We talked with the producer about what he wanted for this movie, and you have to find a character that would be dangerous.  He told me to find someone interesting, and I wanted to portray somebody very dangerous like an animal, which actually reminded me of a friend of mine who is like this.

Why did you decide to pursue acting as a career?
I always thought it was fun and interesting to interpret characters through acting, and I wanted to try to build characters different from myself.

What is the greatest challenge you face when preparing for your roles?
You have to create and build a character, and you discuss this with the director.  You create the character, you think about something you did or saw, a friend, or your own situation when it relates to something that happened to you.  It’s not a challenge.  Sometimes you are doing a character, and the director says “no way!”  Sometimes it is a difference of opinion of what constitutes a great actor or character.  It’s your job to propose something for the character role, but for me it’s not a challenge.  You are waiting to see if it is good or not according to the person who has something in mind for what they want to see for the role in their film. 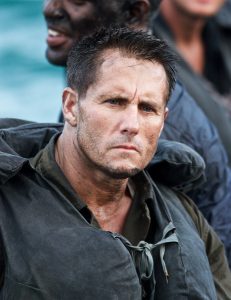 Any upcoming film projects you are currently working on?
Yes, I am currently in post-production for my role as Navy Lieutenant JP alongside Nicolas Cage in the film “USS Indianapolis: Men of Courage.” The film is directed by Mario Van Peebles with cinematography by Andrzej Sekula and is due for release during the summer of 2016.

How do you maintain your routine when you are filming?  I imagine other actors need to also maintain their physique and nutrition for their roles as well, but don’t you all want to go out for drinks after a long day filming?
One rule is that when filming you are not on a diet.  When I go to the set I’m not on a diet, because for me I’m already prepared when I go to the job.  I just concentrate on my job.  In the mornings I practice cardio, but if I want to drink a beer later, I do.  When you are filming you spend a lot of energy also, and you can still go to gym before or after shooting.

How does your diet look when you are in strict-mode for training?
I wake up at 5am every morning, eat rice with some egg whites, and practice Pencak Silat at 6am.  I eat a seasonal fruit late morning.  Lunch is rice with chicken or salmon.  In the afternoon I eat peanut butter on bread like a sandwich, and dinner is usually fish and vegetables.

Do you have a favorite style of music you listen to when training?
I actually never listen to music when I train.  I listen to music just to listen and enjoy the music itself, and I like Classical, Blues, Jazz and Classic Rock.

What inspired you to live a healthy lifestyle?
I want to live longer, and I like to smoke cigars, drink, and eat… If I don’t take care of myself and have a proper balance, I will be overweight.  I like good health and to practice sports, but I also like to ride the motorcycle, drink and eat badly.  If I do only one I will not be healthy and happy.  Sometimes I’m starving, and sometimes on vacation I eat a litre of ice cream!  When you are in good mood you want to.

You rode for your role as Anton in “Rage,” but in real life you are also an avid biker.
Yes, I like all kinds of motorcycles really.  I rode a Japanese sport bike for my role in the film, and here in Paris I drive an older Triumph.  While for larger trips I take my Bobber Harley, like to Spain and Portugal.  This summer I rode to Spain from France with a friend, and we camped along the way, cooked meat over a fire, drank wine, and smoked cigars.

Is there any particular person who you consider most influential in your life?
My friend, and my grandfather was also a good influence who taught me basic rules in life.  After, I had several people who know this job (acting) very well and have given some advice.  They have helped me in life, and it’s been good for me to have very good people around me.

Do have a philosophy or “motto” you live by?
I try to live how I want, but I also try to avoid bad and negative stuff.  I have a couple close friends around me, I try to watch out for them and spend time with them.  This is important to me, because we live only once.  When I look back, I’ve lost so many friends.  We have only one life, and it is too short, so we have to take advantage of all the good things in life.

Behind the Scenes With French Actor Patrice Cols was last modified: August 24th, 2017 by Sasha Frate