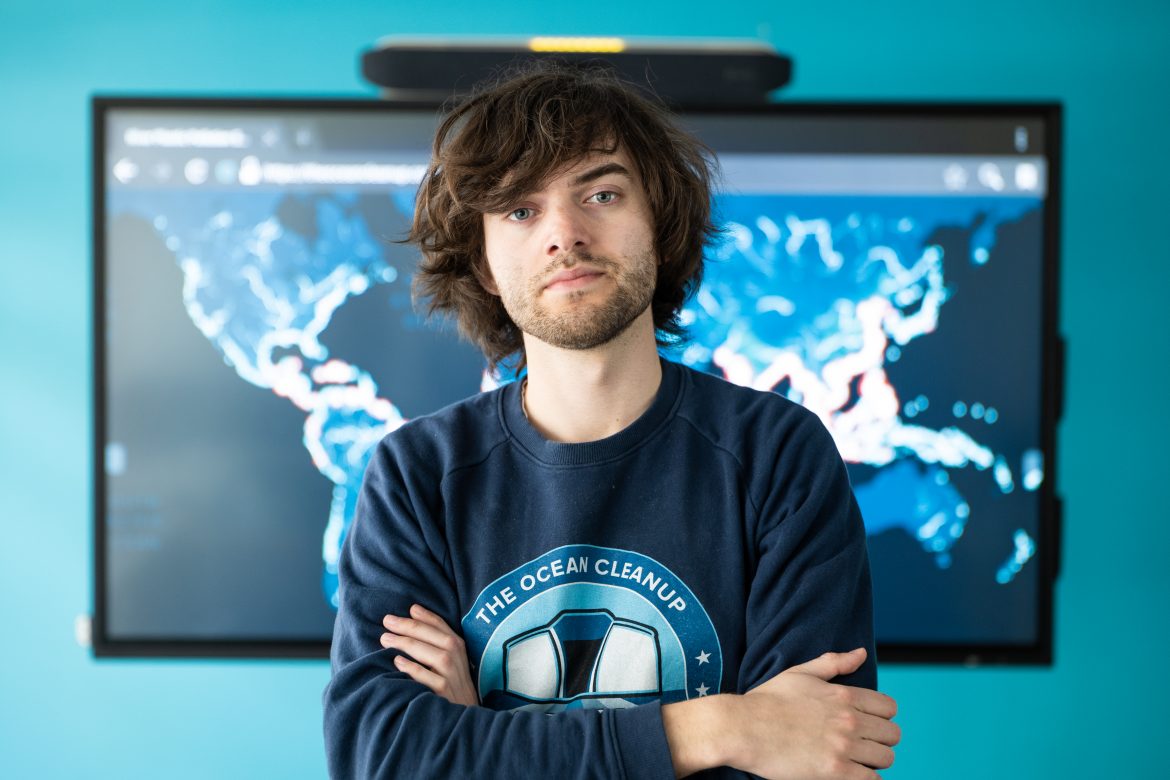 Here is something scary. The Great Pacific Garbage Patch is the largest accumulation of ocean plastic in the world and is located between Hawaii and California. The mass estimated to comprise 1.8 trillion pieces of plastic, spans 617,763 square miles (1.6 million square km), about three times the size of France. Even scarier? It’s not the only marine trash vortex—it’s just the biggest. The Atlantic and Indian Oceans both have trash vortexes. In addition to being harmful to marine life, the debris threatens algae and plankton communities, which are critical to the entire marine food web.

Here is something encouraging. Boyan Slat is a Dutch inventor who creates technologies to solve societal problems. He is the founder and CEO of The Ocean Cleanup, which develops advanced systems to rid world’s oceans of plastic. Even more encouraging? Slat’s company, The Ocean Cleanup, is now focussing on full-scale operational clean-up of the world’s rivers that flow garbage into the Great Pacific Garbage Patch as well as other locations.

This feature was originally published in Issue 18. CLICK THIS BUTTON to explore the entire issue with our viewer friendly, interactive magazine reader.

Boyan Slat is the youngest-ever recipient of the United Nation’s highest environmental accolade, the Champion of the Earth. In 2015, HM King Harald of Norway awarded Boyan the maritime industry’s Young Entrepreneur Award. Foreign Policy included Boyan in their 2015 list of preeminent thought leaders. In 2017, he was given the Thor Heyerdahl Award for maritime innovation.

Now meet the amazing man behind The Ocean Cleanup, chosen by TIME Magazine as one of the Best Inventions of 2015, as he shares his amazing insights with Face the Current. Slat talks about how he plans to attack this crisis, while naming the top culprits contributing to this disaster and most important, how he thinks he can solve the problem in five years at a fraction of the estimated cost.

Sasha Frate: Why did you decide to tackle the ocean as your area of focus for cleanup?

Boyan Slat: I was 16 years old, and I was diving in Greece in the summer of 2011, and suddenly I realized I came across more plastic bags than fish. So I wondered “why can’t we just clean this up?”  Everyone told me: “Oh there’s nothing you can do about plastic once it gets into the oceans.” I wondered whether that was true.

For a high school science project, I dedicated half a year to understanding the problem itself, and why it’s so difficult to clean up. This eventually led to the passive cleanup concept being born.

SF: At age 19 you invented an ocean cleanup solution that aims to address an area of ocean where “using vessels and nets would [otherwise] take thousands of years and cost billions of dollars to complete.”   Named as one of the Best Inventions of 2015 by TIME Magazine, you have come a long way in a very short amount of time.  What is the latest status of The Ocean Cleanup?

BS: Since the announcement of our new system design (from moored to free-floating) in May 2017, the team has worked diligently to move the project from concept to reality. Detailed engineering was conducted, procurements took place and shipping of system elements started early 2018. The assembly site, in Alameda California, kicked-off operations in mid-March.

Simultaneously, tests are taking place in the Netherlands, both in the North Sea and in test basins, to assess the new screen design, which was chosen to be the best fit in early 2018.

After assembly has completed, the Pacific trials for the first system will take place in late spring, 200 nautical miles from the San Francisco coast, as a final rehearsal before the official deployment in mid-2018.

The system will reach the patch after three weeks from departure. As this is our first system, we expect to learn from it and find areas of improvement, so we will monitor the system closely for the first 12 months of operation, both at site as well as with sensors, satellites and cameras. The lessons learned will help us to iteratively improve our system design before we deploy the next cleanup system. We expect to be able to bring back the first batch of plastic to San Francisco in the fall.

SF: Someone once told me “you can’t save the world,” and it appears that this is a common belief that limits people from taking any sort of action whatsoever. Has anyone ever told you something similar from the time you were creating your invention or since, and what is your mindset/philosophy that kept you driving forward with your mission?

BS: The plastic pollution problem always has been portrayed as something that is impossible to solve. When someone tells you something is impossible, the absoluteness of that statement should be enough to make you wary, and investigate more.

SF: How can we utilize ocean currents to our advantage to cleanup the “ocean garbage patches” around the globe- and how will the “passive systems” remove half the Great Pacific Garbage Patch in 5 years, at a fraction of the cost?

BS: To actively catch plastic would be costly, labor intensive, harmful for sea life and take thousands of years to conduct. To catch the plastic, we need to act like plastic. We will use the ocean’s currents to carry our 50, 1 km systems throughout the Great Pacific Garbage Patch, moving in the same manner (and patterns) the plastic follows in the accumulation zone.

The systems will be slowed by drift anchors, at a depth where the current velocities are lower than on the surface. Thanks to this slower pace, the floating barrier will halt the plastic in its course. This will save vast amounts of time, fuel and manpower as well as be less harmful to sea life, in contrast to actively collecting the plastic by going after it with nets and boats.

SF: You’ve identified five major “ocean garbage patches,” but are there others formed or forming that are of growing concern as well?

BS: A year ago, a study was released about a sixth gyre in the arctic (Andrés Cózar et al: http://advances.sciencemag.org/content/3/4/e1600582) This study clearly shows plastic pollution to be a global issue, but it is important to maintain perspective. The concentrations in the Arctic accumulation zone are still 1000x lower than in the Great Pacific Garbage Patch. Furthermore, the study suggests that the microplastics in the Artic are coming from the subtropical gyres (i.e. the 5 known garbage patches), thereby making the cleanup of these areas directly relevant for prevention of further pollution in the Arctic.

SF: You have proven that the input of plastic in the patch is greater than the output. Currently, unless we mitigate the sources, this number will continue to rise. Do you believe we can and will ever trend towards prevention of further trash buildup in the ocean?

BS: In conjunction with the previous question, people need to seriously reconsider their use of plastic, especially single use plastic. It is of course essential to first prevent more plastic from reaching the oceans in the first place, but that is not a solution for the plastics already trapped in the currents of the gyres.

"It is not a question of ‘either cleanup OR prevention’, it’s cleanup AND prevention." -@BoyanSlat Click To Tweet

SF: You are about to launch your system on the Great Pacific Garbage Patch and have revealed more hard facts, which include:

BS: We completed the most comprehensive mapping effort of the Great Pacific Garbage Patch to date, and found that plastic pollution in this area is 4-16 times worse than previously thought. By comparing to previous research in the field, we can also see that the problem is largely persistent, and it will not go away by itself.

Since 92 % of the mass is in the larger objects, there is an urgency to go out there to clean up now, before all of it turns into microplastics.

• Accumulated in this area are 1.8 trillion pieces of plastic, weighing 80.000 metric tons, the equivalent of 500 Jumbo Jets.

• These figures are four to sixteen times higher than previous estimates.

SF:  Where will all this trash go once removed by your system?

BS: Our plan is to recycle the plastic and turn it into feedstock for B2C company products. We hope to be able to fund the expansion of our cleanup, from the North Pacific gyre to the other four gyres, with the help of this revenue. Some of the plastic might also be turned into oil, to power our support vessels.

We have shown ocean plastic is of surprisingly good quality, and can be turned into high quality projects. Imagine your furniture, car bumper and computer screen made out of material, which has been floating in the oceans for years to decades. Several companies have already shown interest in buying up the plastic once we’ve taken it out of the ocean.

Discover the technology behind the system at: www.theoceancleanup.com/technology

Reimagining Food to Decarbonize Agriculture by 2050:...