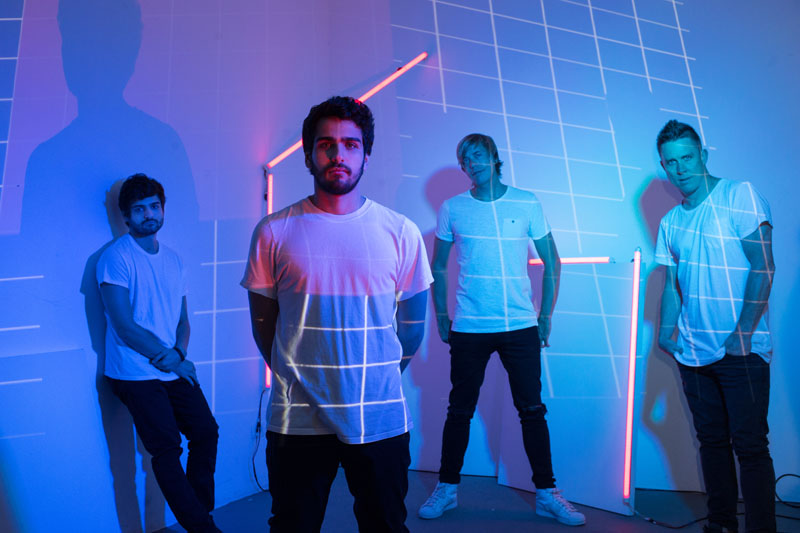 What happens when Cat Dealers, Brazil’s biggest electronic dance music duo, teams up with Cape Town, South Africa’s GoldFish to combine their formidable musical strengths? “Colours & Lights” are shone on the world as the new sound of summer with over 225,000 listens on YouTube! Cat Dealers bring their Brazilian bass, and MTV Africa Music Awards’ 2014 winner of Best Pop Group, GoldFish, weave in their jazz background to fuse the sound into a fresh track worthy of chart-topping status.

This Face the Current Music Feature is published in Issue 25 Sept/Oct 2019 Edition.  Order PRINT here, SUBSCRIBE to digital membership for unlimited access, or continue reading this article below.

Face the Current enjoyed a fun and revealing chat with both groups about their stances on life passions and their ultimate wishes for humanity, and to discover what it’s like to create such a unique and international collaboration.

Woody Woodrow: You just released an epic new single called “Colours & Lights” that sees you joining forces from across the globe. How did you two connect?

Dave, GoldFish: We met the Cat Dealers at an incredible venue in Brazil called LaRoc when they played after us and smashed it out of the park. A year or so later we were reunited online by mutual friends and the collaboration was born.

Cat Dealers: We already followed each other on social media, so we then got their number and started to talk in a WhatsApp group about the idea of making something together. Then Caelu, one of the writers and the singer of the track, sent us the first lyric idea with his voice and we thought it would be perfect for our collaboration with Goldfish. So, we sent them the audio and they loved it, and in about two hours they sent us new lyrics with the sax idea. Everything happened super-fast in this track. Then we sent the new lyrics to Caelu, he recorded it and we produced the track! It’s amazing how easy it was to work with these guys!

Music transcends all nationalities, languages, and cultures. Our hope with every song we make is that it crosses all these boundaries that humans have set up to keep us apart.  – Dave, GoldFish

WW: GoldFish bring the Jazz while Cat Dealers bring the Bass. What was the writing process like while fusing your two specialties?

Dom, GoldFish: It was exactly that—we both definitely have our specialties and so while we focused on the sax melody, the lyrics, and vocals, the Cat Dealers brought the smashing drop ideas and we mashed it all together. That said, I think we and the Cat Dealers have strong instincts in all areas and so there was a lot of cross-pollination and ideas from both groups in all parts of the track. We all seemed to be in agreement on ninety-nine percent of the ideas for the song—that isn’t always the case!

Dave, GF: Most of this track was done on FaceTime, WhatsApp, and Dropbox. It was a real 2019 collaboration! On our first call, we pretty much locked in all the melodies and the structure. Cat Dealers had a rough vocal which we massaged into its current lyrical and melodic state. There are some hilarious voice notes of Dom and me singing all the parts together with some beats in a hotel room in Johannesburg. I was singing the sax parts. From there, the Cat Dealers really got stuck into the drop and came back with some killer Brazilian bass vibes.

CD: We and Goldfish wanted our identities as producers to be featured in the song, so everyone who listens to it can identify our work in it. Since the beginning, we talked about it and decided that the drop would be with our bass line and their signature sax and we really like what came of it.

When you make the life decision to live your passion, it is the easiest thing in the world to live with every day, no matter how hard it might get. – Dom, GoldFish

WW: What was the biggest challenge you faced in working together?

Dave, GF: Time zones for sure; it’s always inconvenient for someone!

CD: Probably the distance since we’re continents apart! But it actually wasn’t that big of a challenge. We got along really well and were all on the same page with the production, which was the main thing.

We think people shouldn’t limit themselves to what they’re used to. There’s so much to learn; so many amazing cultures all around the world! That’s why touring is so important for our work. It’s a way to get closer to other cultures, to learn from different people, and to expand our minds. – Cat Dealers

WW: What was your intention when you combined forces?

Dom, GF: We’ve really been digging the process of opening up GoldFish to new influences and ideas after five albums together, and also injecting new energies into our sound. The collaboration is the perfect way to do that. Also, we have been fans of the Cat Dealers’ music for a long time and with twenty tours of Brazil under our belts, it was high time we did something together!

CD: We’ve been admirers of GoldFish’s work for a long time, so when the opportunity to produce together came about, we got really excited. Our intention was definitely to make the most of it, expand our knowledge and see what the two of us could create together. Luckily, it all went great. Above and beyond all of our expectations, we’re all really happy with the result of this collaboration.

WW: For many of us in the northern hemisphere “Colours & Lights” is a perfect summer anthem. How would you describe this song’s ability to bring people together from all over the globe?

Dave, GF: Music transcends all nationalities, languages, and cultures. Our hope with every song we make is that it crosses all these boundaries that humans have set up to keep us apart.

CD: We wanted the music to capture the fun we had while producing it and the passion we have towards it. We believe this song is full of spirit; it captivates you and passes you this light feeling. We tried to bring this positive energy so people could create good memories while listening to it—that is really relatable all around the world. We just came back from our Europe Tour where we played at some awesome summer festivals, and seeing the response to the song when we played it was amazing! We definitely achieved what we were looking for.

WW: What’s the best advice you would give to someone who wants to live their passion and be of service to the world?

Dom, GF: When you make the life decision to live your passion, it is the easiest thing in the world to live with every day, no matter how hard it might get.

CD: We believe it’s got to come from your heart. Everything you put yourself into that comes from a place of passion is good. Even if it’s tough, it will be worth it. And of course, keep working hard. It depends 100 percent on your efforts.

Dave, GF: They would be the same thing: for everyone to be kinder to their fellow man or woman than they feel like being at the time.

CD: We wish the same thing for both which is opportunity and equality. This would create more possibilities in life and as a result, more chances to find out who they really are and what they want to do. That way they wouldn’t have to limit themselves to the life imposed on them.

WW: We’re going to bring it to the heart center:  Name one thing you love about each person that took part in creating “Colours & Lights”?

Dom, GF: (Laughing) It was honestly the most fun collaboration experience working together. Pedrao and Lugui are awesome guys and I think the thing Dave and I love most is their sense of humor! I think we have a similar outlook on life and not to take things too seriously. The end result was a killer track and some lifelong friends.

CD: Dave and Dominic are super funny, happy, and easygoing people. They’re amazing musicians and we love to learn with great musicians! Caelu is the best at writing lyrics and singing.

WW: GoldFish, how have your South African roots helped inspire meaning in your music?

Dave, GF: South Africa is such a culturally diverse place that it definitely inspired us to think out of the box when creating music. Once people heard our music in South Africa, they really stood behind us and pushed us to greater heights. This was also a huge inspiration to make the best music we can possibly make every time we create something.

WW: Cat Dealers, how do you feel your collaboration helps to lift multi-cultural consciousness across the globe?

CD: We think people shouldn’t limit themselves to what they’re used to. There’s so much to learn; so many amazing cultures all around the world! That’s why touring is so important for our work. It’s a way to get closer to other cultures, to learn from different people, and to expand our minds. This collaboration captures our sounds and identities, all formed in different countries and on different continents, and it worked so well together. We couldn’t be happier with the result and what it represents.

WW: Cat Dealers, you’ve been creating music since you were super young. What would you say to aspiring DJs and music lovers who want to change the world with their sound?

CD: If you love it and if that makes you happy, go for it! You’ll always have to believe in yourself, even when things get difficult. We all go through moments of doubt and insecurity, so you have to stay strong. Surround yourself with people that you love and trust; that’s very important because they’ll give you strength. At the beginning of our career, many people said we would never make it and that this market is too hard. All of the positivity that surrounded us really helped. Stay focused on your objectives and fully dedicate yourself to it.

WW: GoldFish, what’s one secret you’ve always wanted to tell your fans but haven’t felt like you could?

Dom, GF: (Laughing) We fly economy a lot more than you think!

Woody Woodrow is an internationally touring musician, yoga instructor, and a daily meditator. He helped found his heavy rock band “Our Last Night” over a decade ago and now travels around the globe sharing Yoga and Meditation before his shows. He loves connecting and supporting others to live their dreams and become the rockstars of their own life. You can find him on his blog each week on his website.

Get ‘Purified’ On Nature & Music With...