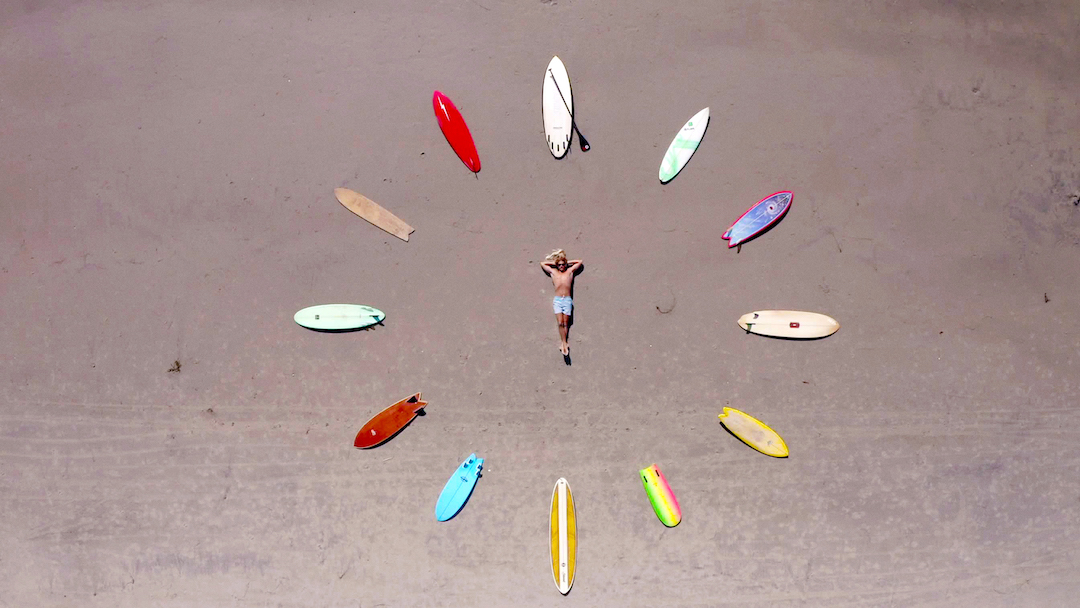 The Beach Boys sang it on their very first album and it’s still just as true today! The ultimate adventure truly is traveling to surf, and World of Waves is the ultimate surfing safari. Presented by Surfing.com and debuting on Sinclair and NBC regional Sports Networks beginning October thirty-first, World of Waves is a travel adventure that showcases the world’s greatest and most famous surfing locations and their inhabitants along domestic and international coasts.

Host Daniel Hughes brings surfing to a vast global audience every week, both to those who already understand the stoke of surfing, and to those who are anxious to discover its allure.

This Face the Current Sports Feature is published in Issue 31. Order PRINT here, SUBSCRIBE to digital edition for unlimited access, or continue reading this article below.

The show’s first season follows Daniel as he visits domestic locations including famous surf spots along the west coast of the U.S., as well as east coast locations including Cape Cod and Montauk, Long Island. Hughes gets the opportunity to sit with surf legends and locals including “The King of Malibu”, Allen Sarlo, and Huntington Beach native son Brett Simpson professional surfer and US Olympic Surfing Team Coach. He even explores the history of American surfing including the sport’s inception when three Hawaiian royals visited Santa Cruz in the mid 1880s and introduced surfing to the local community. (This actually happened decades before the popular influence of Hawaii’s surf legend, Duke Kahanamoku!)

“World of Waves is our way of taking viewers to far away and often remote locations most of them will never visit,” says veteran professional surfer, multiple world title holder, and executive producer, Ian Cairns. “The program will reveal stories and locations within those destinations where the people live, eat, assemble, and call home. Viewers will see in-depth locations like they’ve never seen them before, through the eyes of our host, one of the top, award-winning Stand Up Paddleboard (SUP) surfers in the world and life-long Huntington Beach resident, Daniel Hughes, as well as the locals who live in and inhabit the locations we’ll be visiting.” The show will not only cover traditional surfing, but it will also highlight other ways to ride on water including kite surfing in Oregon and SUP racing in Lake Tahoe. It will even get up close and personal with man-made wave pools offering inland surfers a chance to hit the swells. While season one of World of Waves focuses on domestic shores, international stops are planned for future seasons including Australia, France, Ireland, The Maldives, Senegal, and Portugal.

“We’re looking to broaden the scope and ‘stoke’ of surfing beyond beachside waves and the people who ride them,” says executive producer, Chris Almida. “World of Waves will bring a fresh look to surfing which has grown in worldwide popularity, rising to the level of making it an Olympic event in next year’s Japan 2021 games,” he explains.

“We’re all fans of surf film pioneers like Bruce and Dana Brown, Chris Malloy, and Stacy Peralta. We want to show our viewers the waves, but we also want to capture the texture and feeling of the places those waves appear and the people and places to visit while you’re there—even if you never leave your own living room.”

Whether you’re a grom (young surfer) ready to hit your local break, or a land-locked adult just dreaming about it, surfing strikes a common chord. Part of that excitement and fantasy is being able to stand on water and glide down the face of a long, smooth wave without any motorized propulsion. However, another enticing factor is the traveling required to get to the remote dreamlands serving up those surreal wave breaks. Because, while catchy in the famous tune, a “surfing safari” isn’t just a descriptively fun lyric, it’s a real thing! For instance, if you’re in southern California, a surfing safari could mean a trip to Rincon in Santa Barbara or a northern trek to Santa Cruz and Steamer Lane where old timers used to train for the “big waves” like Wiamea and Hawaii’s Sunset. If you’re headed south you could hit up Swami’s or Windansea in San Diego, or dip into Baja for K38 (thirty-eight kilometers from the U.S-Mexico border). If you’re confident in your skills, check out the island and famous big-wave spot off Ensenada, Todos Santos.

For any surfer, ultimate safaris include Hawaii’s entire North Shore, where dozens of waves have earned their spot in the English lexicon including the Banzai Pipeline to Waimea Bay,  Maui’s Honolua Bay, and Jaws. Other South Pacific destinations include Bali’s Uluwatuu and Teahupo’o in French Polynesia. Or, how about Nicaragua, Costa Rica, South America, Australia, France, Portugal, and South Africa? Now those are safaris! And don’t forget about the south—there’s surfing in Antarctica, too!

Surfing has also spawned entire industries, brands, and cultural touchstones. From the popularization of Torrance, California’s The Beach Boys, to the invention of iconic apparel brands like Hang Ten, Body Glove, Vans, and Maui Jim, surf culture extended the reach of its low-key cool factor. Even movies like Gidget capitalized on the hype, and food and beverage brands like Corona and Malibu Rum were quick to connect with the popular sub-culture. Currently, Frontier Cable in Southern California is using The Beach Boys’ “Surfing USA” as their musical backdrop to encourage people to “surf” their new 5G network. Because no matter the decade or current fad, surfing is dependably cool and attractive.

To state the obvious, waves appear everywhere and anywhere there’s water. Where natural bodies of water are scarce, man-made wave pools have popped up in landlocked locations everywhere from central California (the original Surf Ranch was built by eleven-time surfing world champion, Kelly Slater) to the Wasi Adventure park in the deserts of the United Arab Emirates, and URBNSURF in Melbourne, Australia. There’s even something categorized as “wave phenomena”—perhaps the most unusual wave on the planet—that can be found in Eisbach, Munich, Germany on an artificial river. Here, the surfers don’t need to move out to the waves because the water comes to them. Future explorations are even planned to include rivers and lakes where surfing has sprouted up and taken root in traditionally unlikely locations. World of Waves explores all of these unique locales and more!

“We’re bringing high-quality cinematic photography to these locations to capture not just the amazing action on the water, but also the often-exotic locations we’re visiting,” says TV veteran and executive-producer, Jason Charles. “We’ll have cameras in the water, on the boards, on the surfers, and in the air above them with drones. We’ll be seeing locations many viewers will never visit, so we want to give them an immersive experience, so they’ll feel as though they’ve been there and experienced those locations first-hand. If they still want to experience more of that location, Surfing.com will provide them with everything they will need to know and perhaps the incentive to travel there.” Another key member of the World of Waves team is Kevin Griffith, executive producer, partner in Oceanic Media, and owner of Surfing.com. Griffith had the foresight to register the URL in 1995 and feels the time and team is right for introducing it in tandem with World of Waves.

“We envision World of Waves and Surfing.com to provide viewers and visitors with information on hundreds of locations around the world. We’re building a program and complementary website to be a resource for surfers who’re visiting foreign sites to surf those amazing waves, to learn about the history, the outlying locations they should visit, where to stay, and possibly the people they can meet there.

We’ll eventually solicit content from people who live in those locations and provide blogs so people can communicate with each other about their experiences and get advice from others who’ve already visited. We hope to also post submissions from people and places we ourselves may not know about so we’re able to learn and educate others, all the while continuing to expand on the incredible ‘world of waves’ that we all share.”

So, mark your calendars this fall, wax your boards, and hang loose with World of Waves!

Bringing Big Swells to the Small Screen with the Ultimate Surfing Safaris in World of Waves was last modified: July 17th, 2021 by Chris Almida

Chris Almida is one of four co-founders of surfing. com who came together with a passion for surfing and connecting people who love waves and travel with great places and great people to help you on your journey. Chris is a serial entrepreneur with a long history in startups and technology with experience ranging from intellectual property licensing, program management at Microsoft and C level executive management at both nonprofit and for profit companies engaged in emerging energy technologies. Drawing on this background, Chris is driving the digital customer experience for surfing. com and is an Executive Producer of the World of Waves television show along with his co-founders Jason Charles, Ian Cairns and Kevin Griffith.