Leading the Way for a Greener Tomorrow with Maine’s Youngest-Ever Female State Senator: A Close-Up with Chloe Maxmin 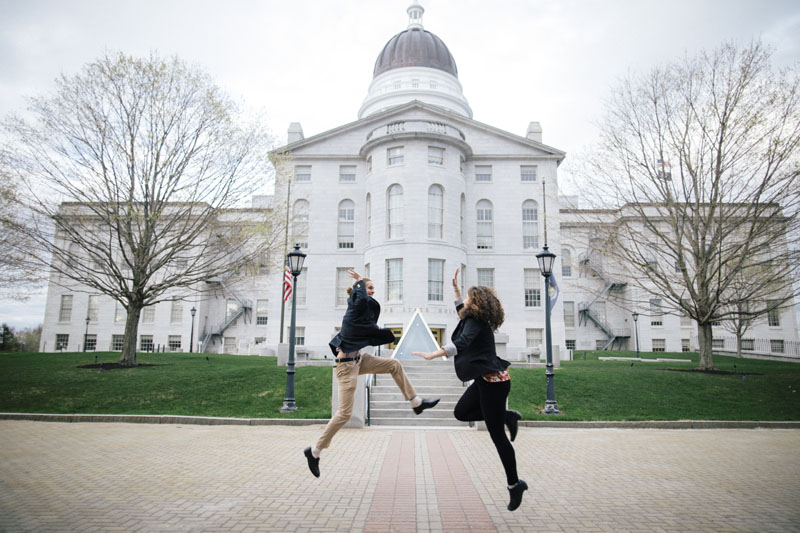 The future of the planet depends on people like Chloe Maxmin. A resident of Nobleboro, Maine, Maxmin grew up on her parents’ farm and fell in love with the woods and surrounding natural environment. Now, she has channeled that inspiration and made it her life’s mission to protect the wild.

Born in 1992, Maxmin has been a community organizer for more than sixteen years, founding the Lincoln Academy Climate Action Club when she was in ninth grade and co-founding Divest Harvard while attending Harvard University. For her work with the Climate Action Club—particularly her focus on recycling batteries—Maxmin received the Gloria Barron Prize for Young Heroes and gained the support of over 70,000 students when she challenged Harvard College on their fossil fuel investments.

With tremendous experience working on a variety of political campaigns, Maxmin was elected to the Maine House of Representatives in November of 2018 and became a state senator in November of 2020. Maxmin is the first Democrat to represent her district, Maine House District 88, and is the youngest female senator in state history. Her time in office has already led to the introduction of the Green New Deal (a plan to invest in green energy and technologies) as well as additional bills aimed to strengthen community and environmental efforts.

A fierce commitment to her home state and its residents has given Maxmin a strong foundation on which to build her political career. With an impressive past and an even more promising future, Face the Current wanted to connect with Maxmin to reveal the motivations and processes behind her life’s work.

Ty Johnson: When you were in high school, you started the Climate Action Club and took a stand against climate change. What inspired you to become passionate about the environment at such a young age?

Chloe Maxmin: The answer is very simple: I love my home. I love my community, our environment, our way of life. As I grew up in rural Maine, I began to understand that the greatest threat to all that we love is the climate crisis. And so, I started to get involved and see what I could do.

TJ: You have a great love for nature and are fighting to protect the entire planet, but more specifically the woodlands and people of Maine. Is there anything in particular about the people or environment of your home state that inspires you?

"My family & community raised me to focus on values. Are you a good neighbor, a good person? Do you show up to celebrate, mourn, support, check-in? We didn’t identify people as Democrats or Republicans." -@chloemaxmin Click To Tweet

It wasn’t until I got to college that I realized how important those words are out in the world. Because of this, I’ve always cared more about our culture and who we are rather than what we are. I also grew up amidst farms and fields and lakes, ice fishing, snowmobiling, fishing, and swimming. My family operated a small farm, and I was always outside helping my dad keep our animals and land happy and healthy.

TJ: By proposing the Green New Deal to the Maine legislature, you are attempting to push towards a future with more American investment in green energy and green technologies. Why do you believe it is important for Maine and the United States to be strongly positioned when it comes to green energy industries?

CM: For rural states like Maine, our economic vibrancy is intricately tied to the health of our environment. Our state relies on fishing, tourism centered around our natural resources, forestry, and agriculture—all industries that depend on a healthy environment. To stand up for the environment and green energy is the same thing as standing up for Maine’s economy, which is why it’s so important for Maine to be a leader in tackling the climate crisis.

TJ: You have been named a Green Hero by Rolling Stone and have received many awards including the Brower Youth Award and the Samantha Smith Award for youth activism. How are you able to stay so focused on and committed to your goals?

"I do this work for my home. I won’t stop fighting until I know that it is protected & safe. I’m rooted in what I love, & that’s how I stay focused." -@chloemaxmin Click To Tweet

TJ: Upon receiving the Gloria Barron Prize for Young Heroes, you said, “I want the environment to remain sacred, animals to remain in their natural habitats, and humans to thrive in a harmonious relationship with nature.” Do you have any specific mentors who helped inspire you to become so passionate about the human relationship with earth?

CM: Not that I can remember. I grew up so in love with the nature around me. It’s always where I’ve felt most comfortable and known.

TJ: As a state senator you represent a wide variety of people. How do you connect with your district to get to know the population and to educate and teach more about your movements?

CM: Great question! Most of this process happens on the campaign trail, which is one of the reasons why I believe in reimagining how we can campaign to really reach out to folks and understand what people are thinking in your district. I do a lot of door knocking. In 2020, I knocked on 13,314 doors by myself—about a third of my entire District. Our team made 86,000 contacts total in 2020.

Through this outreach, I get a really good sense of who my District is, what folks are thinking, and what they might think about certain issues in Augusta. While I am in office, I make extraordinary efforts to talk with everyone, on both sides of an issue, through phone calls, emails, and meetings. I also have held “Coffee with Chloe” every single month since I was elected in November 2018 to hold a space for constituents to share their issues, get updates on what’s happening in Augusta, and connect with community around politics.

Leading the Way for a Greener Tomorrow with Maine’s Youngest-Ever Female State Senator: A Close-Up with Chloe Maxmin was last modified: March 14th, 2022 by Ty Johnson