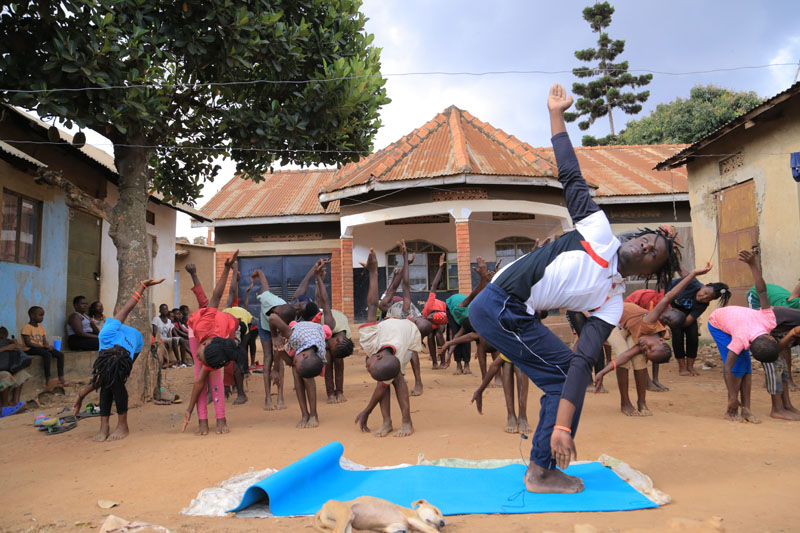 I’m Okurut George. I’m twenty-six and I am a yoga, acroyoga, and dance teacher, and I am very passionate about helping communities and slums in Uganda and other parts of the world. After school in 2012, I started my journey with breakdance and then I found yoga in 2016. I went back to school in 2013 and 2014 to take a course at a technical institution, but when that didn’t go well for me, I decided to follow my passion. I grew up in a war zone area and had experienced war for more than two decades. A lot of family members in war zones are separated or killed, and people like me are so stressed, anxious, and depressed.

This Face the Current Culture Feature is published in Issue 33. Order PRINT here, SUBSCRIBE to digital edition for unlimited access, or continue reading this article below.

I moved from the village to the city and after a dance practice with a friend, I discovered yoga. I knew that it would be so good for me to take after everything I had gone through in life. I needed something cool that could make me happy for the rest of my life, and I found that with yoga with dance. I wanted to somehow combine them and then focus on the communities and the slums. I knew there were many youths who were going through the same problems as me, and I wanted to share the relieving power of yoga and dance.

After practicing yoga for two years, I took a step ahead because I really wanted to help grant access to the facilities in need that couldn’t get service. So, I had to represent them by getting certified through a sixty-hour course in 2018 as a Yoga Teacher for Children under Yoga Pura Vida in Tanzania. Then in 2019, I deepened my studies with scholarships from Indian High Commission to go to India and undergo a 300-hour Yoga Teacher Training course at one of the best Svyasa yoga universities in India.

Slum Yoga is one of the projects that I initiated because of the experiences I had living in the slums. There are many unemployed youths that get involved with deadly criminal activity, and sadly, many end up in prison with lengthy sentences. My mission is to share yoga with them to help them discover themselves so that they can stand on their own. Because I lived the war zone life and the street life, I know how everyone feels who is experiencing it.

My friend Atite Prisca and I started a movement called Swing Dance Uganda. After attending Mozambique Afro Swing Exchange Festival in 2019, we thought it could be an experience for Uganda, as well. We wanted to show self-expression and a connection to traditional Ugandan dances.

I have received newspaper coverage about my project of using yoga and dance to rehabilitate children in the slums, and I have tried to find places with high criminal activity so that yoga can be used to bring peace to people. I also fought hard to introduce yoga to schools and children’s prisons. Yoga and dance have connected me to different creative and positive people around the world. Some of the children that I have taught have performed in two big international Swing Dance Festivals: the International Lindy Hope Championship-ILHC in USA, and CapCap Event Swing in Italy. I am so happy because the world gets to see that swing dance exists in Uganda, and it’s even sparking Ugandan tourism.

I decided to take this path in life because many young generations are suffering in silence and I want to give them hope to believe in themselves and tell their own stories to the world. At one time, my family didn’t believe in what I do, but now I get to work with my passion to take me to different parts of the world. My family now believes in what I do, and they see how I give happiness to people around me every day. Having been that young person who grew up on hard times, I want to be the inspiration to many people out there so that they can stay focused on their goals and dreams. Living a peaceful and loving life that is not focused on material things is something to be so grateful for.

Some communities like 22 Kids Foundation, New Hope Dance Project, Arc Charity Foundation in Jinja, Ayiko Dance De Circus Art Project, Hope Uganda Foundation and Heart of Dance African Rhythms in Nsambya are few of the communities Okurut George has been teaching yoga and dance too but due to covid19 situation. He couldn’t move to more communities and he worked more with Heart Of Dance African Rhythms because it’s near where he stays.
His next mission is to move all of over Uganda and some of African countries teaching Swing Dance and Yoga in few months to come from now. He also thank all people who have been supporting him from the beginning until now because without you, he wouldn’t do it alone.