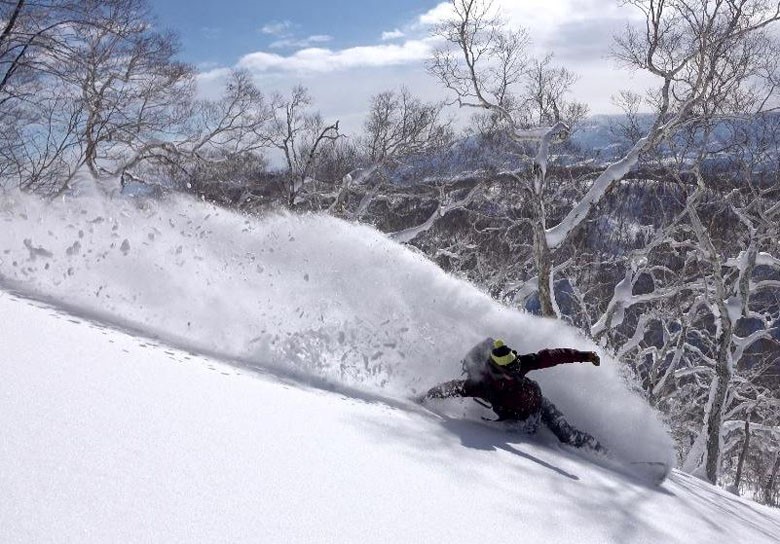 [vc_row][vc_column][vc_column_text]When we see beautiful photos of snow covered peaks and majestic videos of winter landscapes, we are filled with an undeniable sense of awe and an excitement for the unknown. Some of us experience a yearning to be standing atop the mountains gazing down at Mother Nature in her finest.

But should we instead be having thoughts of conservation? Should we be more concerned with how we can protect these beautiful landscapes? The answer is simple for Rafael Pease.[/vc_column_text][vc_single_image image=”1550″ img_size=”full” add_caption=”yes” alignment=”center”][vc_column_text]Although he was born in France, Rafael has spent the majority of his life between the United States and Chile. He truly is a mixing pot of cultures, backgrounds and ethnicities coming from an American/Chilean/Cuban family. His introduction to the mountains began when he was 17 years old and only grew as time passed. In order to pursue the adventure he so deeply desired and to make a positive impact on the environment he loved, he decided to move to the diverse state of Colorado. There he would attend the University of Colorado where he would take on an impressive course load that included a double major and a minor in Environmental and Geographical Science.

But his passion didn’t end there.

In order to make an impact far beyond his personal abilities, he decided to add the titles of “filmmaker” and “director” to the list of titles associated with his name. With these, he can help contribute more effectively and efficiently to the places about which he cares so deeply.

CM: What role did the way you were raised play in your love for the outdoors?

I believe that the way I was taught to respect animals and the environment is the reason I live my life committed to loving the outdoors.

CM: When did you really become captivated by, or maybe even ‘addicted’ to the outdoors, complete with mountaineering, backcountry snowboarding, and split-boarding?

I truly became captivated when I first decided to go further than the recommended boundaries at ski areas and begin to explore the Andes and Patagonia in Chile. When I began using the tools from mountaineering and split-boarding as a transportation method to explore the wilderness, I was hooked.[/vc_column_text][vc_single_image image=”1551″ img_size=”full” add_caption=”yes” alignment=”center”][vc_column_text]CM: Tell us about your project and what prompted you to not only live it, but to showcase your passion by producing your film?

The “Connections” film is the first documentary of, hopefully, a long list of them that I plan to create to help spread the message of positive choice making when it comes to living in harmony with the world. I want to show the connections that we as humans have with everything.

CM: You’ve stated that one of your goals for the film is for it to be “an exploration of cultural and ecological conservation topics.” Does your film emphasize how athletes, explorers, and humanity as a whole impact our environment? Or is the focus on protecting nature?

There will be a balance between protecting what little true nature we have left and how we can live in harmony with it. The film does this by looking at people who dedicate their lives to mountain environments.

CM: Part of the Connections Movement is an emphasis placed on living the “connections philosophy.” Athletes, including yourself, live in some of the most remote and rugged places on Earth. But you also look at indigenous cultures in all these places.  Can you share perspective you’ve gained from local indigenous culture?

Losing the rights to one’s land and having it destroyed by unjust governmental law has been a common theme throughout all First Nations around the world. This is tragic on many levels, including the fact that the rest of the world could potentially learn a lot from all First Nations about how to live in harmony with the land.[/vc_column_text][vc_single_image image=”1552″ img_size=”full” add_caption=”yes” alignment=”center”][vc_column_text]CM: What do you hope people will take away from your film?

I hope people get a better understanding that everything is connected and that every act, positive or negative, has an outcome. It’s the people’s choice to create positive change for a healthier world.

CM: Your photos and videos on social media are impressive and do an awesome job of capturing the serene, yet incredible power and beauty of Mother Nature. What does it feel like when you are strapped in, about to drop in from a mountaintop after the effort and work you put into getting to the top?

The feeling of summiting is like no other. Not because you have conquered the mountains, which is impossible, but because the single point on which you’re standing gives you the best views in the valley. Most of the time, anyway. Making it up to your objective is only half the job, and is mostly work. Getting down is the other half, and it’s usually all fun![/vc_column_text][vc_single_image image=”1553″ img_size=”full” add_caption=”yes” alignment=”center”][vc_column_text]CM: If you could summarize your film or personal life philosophy into a motto, what would it be?

When we’re dedicating significant time and effort to help protect a way of life, it’s good to enjoy it as well. Living with and learning from the land is crucial.

CM: When and where is your film due for release?  Is there any place we can follow for updates?

Fall 2018.  All updates can be followed on Connections Movement social media. It will be on my personal media social media sites as well.

This is a condensed version of Marie Clare’s full interview in FtC’s April Edition on pages 87 – 89. Find a print or digital copy or subscribe, all here. To see more on Rafael’s film/s, adventures and movement making www.rafaelpease.com or www.facebook.com/rafapease or you can find him here @RafaelPease

Clare Marie also goes by “BASEgirl” – a BASE jumper, Skydiver, Mountain bike racer, Rock climber, Motivational Speaker, Keynote, and Model.  A passionate vegan and a world traveler with a life goal is to inspire others and help them accomplish or find their dreams and passions. Clare Marie defied the odds becoming one of the world’s youngest BASE jumpers at 16 years old, setting a fierce example how to follow your dreams! (And now helps others find theirs)
https://basegirl.com | Instagram: @thebasegirl