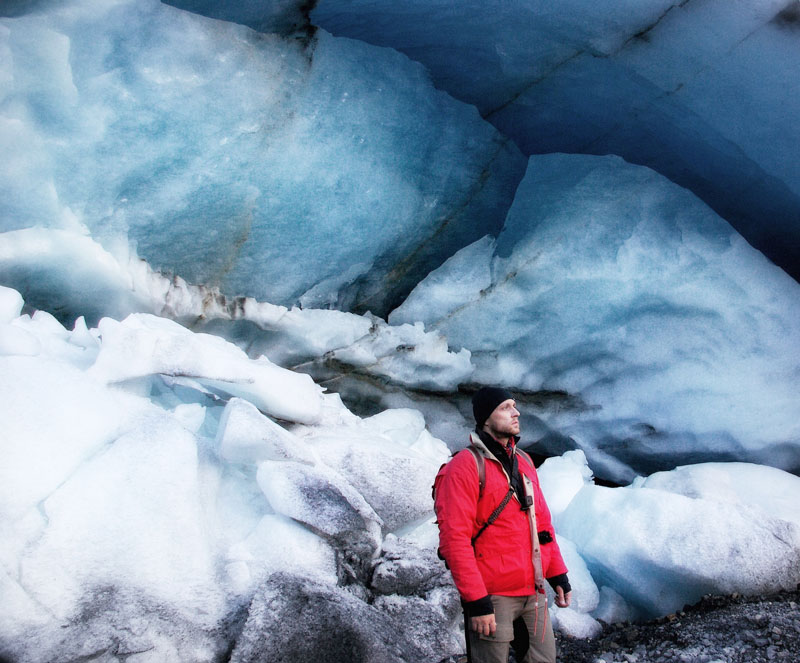 Dax Justin is a Canadian explorer, adventure photographer, contributor to Canadian Geographic, certified educator for National Geographic, Helly Hansen ambassador, and a public speaker. Based in Calgary, Alberta, Canada, Dax uses his photos and stories to connect humans back to nature. With his work demonstrating a balance between humans and our natural ecosystems, it proves to convey concern for wildlife conservation, ecotourism, ocean health, humans’ impact on the environment, indigenous culture, and the ongoing challenges our youth face with technology. He is also the creator of the Explore in School youth initiative and Smartphone Pro Mobile-Photo Workshop.

This Face the Current Sports Feature is published in Issue 26 Nov/Dec 2019 Edition.  Order PRINT here, SUBSCRIBE to digital membership for unlimited access, or continue reading this article below.

Having grown up in Calgary, Dax recognizes that his environmental surroundings helped shape his adventurous lifestyle. “I describe my home city of Calgary as the ‘basecamp to the Canadian Rockies’ as we are less than two hours away from one of Canada’s most notable national parks—Banff National Park,” Dax explains. “Being this close to the pure outdoors has allowed me to explore at a frequent basis. The Rockies are ENDLESS.” Dax also expounds his advocacy for discovering everything Calgary has to offer, including the people, communities, art, and its social impact.

In terms of spending time in the mountains, Dax acknowledges the power and allure they possess. “Time spent in nature resets your energy, balances your thoughts, and re-aligns your focus. The mountains carry an unspoken magnitude that is only felt yet leaves you speechless. You feel like you belong. You know what matters in life, and you’ll become your true self,” he expresses.

For Dax, living life means running toward discovery. “We are ALWAYS MOVING. Movement is a huge part of being a human and being conscious of how you’re navigating life is super important,” he notes. A life of discovery means letting go of your pre-conceived notions of personal limitations and just getting out there, taking action, and doing something. “Until we push ourselves and explore (WAY) outside our comfort zones, we have no clue what we’re capable of. I’ve skied off a freakin’ 8000 foot mountain summit and paraglided to the base. I didn’t even know what paragliding was two days before.”

In his role as a speaker, Dax speaks to a variety of organizations including schools, universities, corporate conferences, and events. He has also given a TEDx Talk and was a keynote speaker alongside Dr. David Suzuki at the Prairie University Biology Symposium in Calgary, Alberta. In his TEDx Talk, Dax bravely delved into his raw and personal battle with drug addiction; something he says is a misunderstood notion. “When I heard about the concept of ‘addiction’, I thought ‘Oh I’m not that. There’s no way I’m an addict.’ But I’ve got news for all of you: we’re all addicts,” he declared.

Living a life brimming with vitality in nature allowed Dax to understand the power that the natural environment holds in terms of combating addiction.

“There are a few things that stand out in my mind as to how you can slay your own addictions with nature. The first is with action. You can set intentions, but without action you’re not going to wake up being any different—it’s just your thoughts that are changing, not your behavior. So, I took action to change my life. The second thing is courage. If you don’t think you’re courageous it’s because you’ve been taught that you haven’t been. The last thing is you need to celebrate relentlessness. Take it to the limit because only then can you start discovering your true self. You don’t have to wait for your rock-bottom.”

This was a pivotal moment of clarity in Dax’s life, leading him to discover an unparalleled connection with nature that had been missing in his journey. “After that, there was a big disconnect between me and the city lifestyle. I was drawn to pursue the wild; relentlessly pursue it. When I was compelled to go into nature, I felt alive. It was the purest thing I had ever, ever felt. And not only that, I kind of felt like a kid again! But it wasn’t like I was discovering childhood again, it was like I was discovering ‘wildhood.’ And that moment changed my life,” confessed Dax. “I started doing things I’d never done before like getting in a canoe. This was one of the most meditative experiences of my entire life—getting in a canoe or kayak—and I didn’t know that about myself, which means I didn’t even really know my true self at all. I was a product of what I thought I was supposed to be doing.” This moment came with an epiphanic realization: “At this point, I’m still addicted, and I’m addicted to nature. That whole experience has shaped me, changed my life, and I no longer need to escape or run away. I’m running toward a life of discovery.”

To further his discovery of ‘wildhood,’ Dax was part of a national campaign with GoRVingCanada in 2016 called “Wildhood”. The campaign seeks to reconnect us to the natural explorer in our hearts by encouraging wanderlust and an appreciation for the great outdoors through travel. “Personally, I like to think of it as placing yourself back into your childhood when you played all the time; when you were wild,” clarifies Dax. “Now add the outdoors to that vision. Wildhood is the essence of bringing back your childhood as a Born Explorer.”

In his expedition to Haida Gwaii, British Columbia, Canada, Dax trekked with the year-long Ocean Bridge program—a youth initiative aiming to equip young people with the knowledge and confidence to become ocean advocates in their own communities. Once known as the Queen Charlotte islands, Haida Gwaii is comprised of 150 rocky islands off the coast of British Columbia. In Haida nation, lush old-growth rainforests and breathtaking landscapes abound, surrounded by crashing ocean waves.

Following this, Dax continued on to the prehistoric sands of the Canadian Badlands with Tourism Calgary in search of dinosaur bones that have never been touched by human hands. As Dax recalls, “This is Indiana Jones meets Jurassic Park out here! You can access the Badlands from Calgary in a short drive…and stay tuned because we found the bones we were looking for!”

In September 2019, Dax was nominated for Fellowship at The Royal Canadian Geographical Society—an honor he describes as “humbling.” National Geographic has also created an inspiring learning framework designed to foster an explorer’s mindset, and it’s no surprise that Dax is involved in this as well through his role as a National Geographic Certified Educator. The initiative seeks to educate Pre-Kindergarten through Grade twelve students about the world in innovative and interdisciplinary ways. As an informal educator, Dax described the course as, “Jet-fuel for my youth initiative, Explore in School.” Through his work with the RCGS and National Geographic, Dax is inspiring the next generation of explorers, conservationists, and changemakers.

In his pursuit of the wild, Dax has visited many places capturing landscapes, wildlife, culture, people, and the adventurous spirits of the lands. One of his most memorable stops was Barrier Lake in Alberta, Canada, earlier this year where he was able to gaze upon the icy textures and marble-like formations of the lake from the vantage point of a helicopter. “This warmish winter season in Alberta has brought some fascinating landscapes to life and I always enjoy capturing and sharing something different!”

Being in the wild as much as Dax is, wildlife encounters are a welcome inevitability. From “stare-down” moments to observing and documenting animals like polar bears, Dax has an impressive personal catalogue in nature. In late October 2017, Dax journeyed to Churchill, Manitoba—the polar bear capital of the world—on assignment with Canadian Geographic. “Sometimes we gently approached the bears, other times they cautiously approached us,” he recalls. “We saw several different bears over the week and in EVERY instance there’s this instantly noticeable transfer of energy between you and the bear. I’ve been struck-through the heart by these animals.” Not only does Dax advocate for exploring the outdoors, he has also realized the importance of trekking within oneself. This past January, Dax understood that his life needed a recalibration. “I couldn’t put my finger on it but what I needed was Olympic training for my life,” he describes. “Mental health affects us all and to not talk about it is like living in a circus. Being an explorer and photographer allows me to be immersed in true life, and sharing it is a blessing. But it’s usually very fast-paced, heavily stressful mentally and physically, and you can let thoughts of ‘defeat’ slip into your mind; it’s easy to embrace.” Dax believes a big part of this mental re-set requires a disconnection from technology to reconnect with ourselves.

“I believe in the moments of our lives. I believe in reconnecting youth to nature. We can become the ocean and the mountain—I will fight for it. I will carve paths and light blinding torches we can pass onto the future. That’s my commitment.”

5 Amazing Dining Experiences Around the World