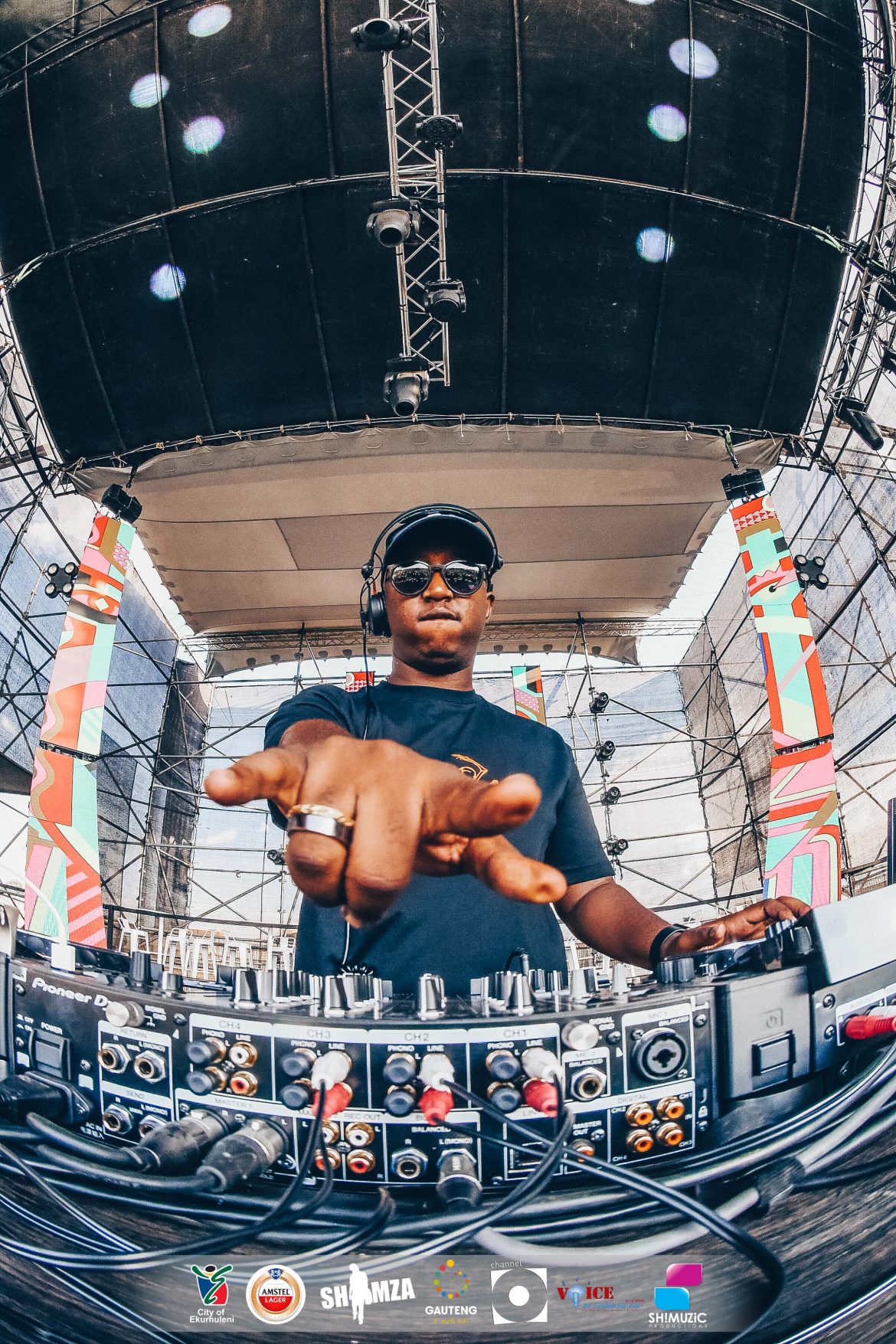 Ashley Raphala—known as Shimza—is a South African DJ and producer and is one of the continent’s most celebrated musicians. As an Afro-tech tastemaker, Shimza has charmed audiences around the globe with his unrivaled mixing abilities and explosive performances at RESISTANCE Cape Town, Boiler Room, and Mixmag Lab Johannesburg.

Shimza was voted Best Male DJ at the 2019 African Dance Music Awards, and also won Best Festival for his project entitled “One Man Show”. This personal endeavor was launched by Shimza a decade ago in Temibisia, South Africa to raise funds for underprivileged children in his local community. It is now a much-anticipated event in South Africa’s annual calendar, welcoming local and European audiences.

This Face the Current Music Feature is published in Issue 27.  Order PRINT here, SUBSCRIBE to digital membership for unlimited access, or continue reading this article below.

Aside from sharing his music, Shimza’s mission is to alter the manner in which South Africa’s youth consume content while encouraging them to use the medium of music to fuel education. Shimza firmly believes that this fusion of music and culture is the best way to engage audiences in topics that encompass South Africa’s rich history while also encouraging social cohesion in modern times.

Face the Current connected with Shimza to discuss his music, his hopes for South Africa’s youth, and the ways in which he aims to share the sounds of his home country with the world.

South Africa’s youth is very involved in my work and that has been the aim from the beginning. I try to make sure that I encourage education about the music/entrepreneurial industry so that people can go out there and implement the lessons for themselves.

Sasha Frate: How did you come into the music world and why did you decide that it was your path to pursue?

Shimza: My backstory is really as simple as I fell into what I love. When I traveled to school every day by foot, I would pass a house where I heard great music being played. One day I got the courage to go into the house to ask who was playing this music and that is when I met a man by the name of Khomza who graciously taught me how to DJ. I think I was fifteen at the time and whenever there was a disco at school, I would always offer my services. I never looked back from that point on and I’ve pursued my career, which has flourished ever since. I went on to win the biggest DJ competitions, which then allowed me to get DJ equipment to help me practice my craft every day.

SF: Can you share how your work has involved South Africa’s youth and the ways in which it encourages learning through music?

S: South Africa’s youth is very involved in my work and that has been the aim from the beginning. I try to make sure that I encourage education about the music/entrepreneurial industry so that people can go out there and implement the lessons for themselves. I get a lot of questions on social media—and I can’t get to most of them—so I decided to host workshops around the country, keeping in mind some of the questions people have sent me. South African youth has such great potential and I believe it is up to us to foster and nurture this talent so that it can take us to greater heights.

SF: How do you see music and culture as having the ability to bring social cohesion?

S: Music and culture play a very major role in bringing people together. I think that is one element where we can be worlds apart and differ in culture, but still share the same feelings when listening to music. People travel around the world to experience being in a different country while going to festivals or clubs. Regardless, at any event, music is being played for the enjoyment of the people. This is where people interact with their moods and engage with their personalities.

SF: What is your “One Man Show” project and how has it evolved to become an annual staple event in South Africa that welcomes over 15,000 people from all of Europe?

S: My “One Man Show” is a charity driven show which is held annually on Christmas day. The event went from attracting 800 people in 2006 to over 15,000 in 2019. The festival stemmed from seeing numerous homes in Tembisa (a township in South Africa) that house orphaned, vulnerable children who have HIV/AIDS and/or who are mentally and physically challenged. This greatly concerned me and I wanted to do something in my community to help enact change. The festival makes money for us to give back to the carefully selected homes.

Being a young boy from Tembisia who had never left the country, I aspired to see other parts of South Africa and the world, and I am now able to do that. This is what I would like to tell other kids: Follow your passion! It is possible to make things happen. Through diligence, hard work, and discipline, you can do anything you set your mind to.

SF: How do you aim to raise South Africa’s global profile by using music as a platform?

S: I have played in many parts of the world and adopted different sounds. I have learned how to expand my musical repertoire by incorporating these different sounds into the way I play. I’ve also recently signed to Anna Agency and this allows me to further my music in other parts of the world. I always showcase the fact that I am proudly South African in the way that I play, as I always play local authentic beats while adding my own flair and style.

SF: The music industry is not typically known to promote a healthy lifestyle, especially for touring artists who face constant travel and immersion in the “party scene”.  How do you maintain your approach to healthy living and why has this been important for you?

S: As you may know, I started a new fitness regime this year which means I’m going to the gym on a regular basis and eating healthy while I’m at home. However, it does become difficult when traveling for my gigs because some places do not provide healthy meals. However, upon returning from gigging, I know that I have to go in ten-times harder at the gym.

S: I would like to tell a story of breakthrough. Being a young boy from Tembisa who had never left the country, I aspired to see other parts of South Africa and the world, and I am now able to do that. This is what I would like to tell other kids: Follow your passion! It is possible to make things happen. Through diligence, hard work, and discipline, you can do anything you set your mind to.

SF: You recently spoke at the Amsterdam dance event on the evolution of Afro Tech. What are some highlights you shared on this and can you divulge a bit more about the events and their purpose?

S: The whole experience was a highlight for me because it meant that I was a voice of new sound to an entire nation, and it was humbling that the people of the world are taking note of it. Sharing my knowledge amongst the other panelists also ensured that we’re teaching people about our unique sound.

SF: Which of your tracks are you most proud of and what do you love about it?

S: I am really proud of all my songs. I can’t pick a few because I have put so much work into each and every one of them. I still enjoy the first song I ever produced, right through to the songs that I am currently doing today.

SF: Are there any projects you are currently working on or preparing to embark upon that you can share with us?

S: I have a couple of things planned for next year! I will be moving to Europe for the summer and I will be doing a couple of collaborations, releasing some new music, and obviously preparing for my shows.