American Mountaineer Christine Boskoff: Searching for Truth on the Edge of the Map 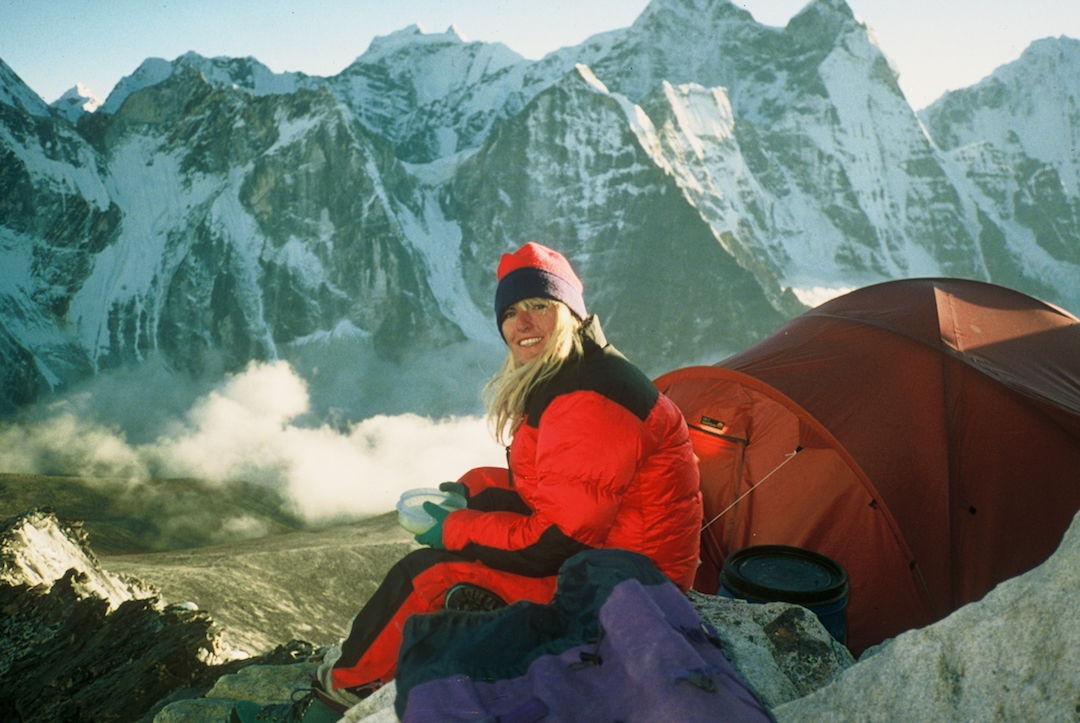 Extreme outdoor sports have increased in popularity over the years as more people seek nature provided thrills. Although dangerous, curiosity leads individuals to all edges of the planet in search of adventure. Something special occurs when you submit yourself to the wild and unpredictable elements of Earth. Chirstine Boskoff was an American mountaineer who fully embodied this mentality.

Climbing mountains requires complete commitment as well as tremendous preparation, but for Boskoff the breathtaking views and treks were much more than just a hobby. Those who were lucky enough to know her personally understand all that climbing meant to her.

Boskoff sought joy and truth with her entire self, and never let fear or doubt slow her down. Born and raised in Appleton, Wisconsin, she is the only American woman ever to summit six 8,000m peaks. In 1997 Boskoff and her husband Keith purchased Mountain Madness, one of the world’s leading mountaineering schools/guides, from the estate of Scott Fischer.

Later in her climbing career she would focus on conquering first ascents of lower, lesser-known peaks in Asia. Boskoff’s life tragically ended in 2006 when she and her climbing partner Charlie Fowler attempted to summit Mount Genyen in China. Edge of the Map by Johanna Garton delves deep into the life and connections of the legendary climber. Face the Current reached out to discover more of Garton’s insights and perspective gained throughout the research and writing process.

Ty Johnson: When your mother first mentioned Christine Boskoff, she pointed out that you two had gone to high school together. How did this make you feel, and what have you learned while writing this book that has brought you so deeply into the life and story of Chris?

Johanna Garton: Though her story stood on its own merits, the fact that we’d gone to high school was a real clincher in deciding to pursue the project. By the time I’d spent a few years getting to know Chris and her legacy, I felt a type of sisterhood with her based on our similar upbringing and interests. As a journalist, I tried to be quite objective, but ultimately her lingering energy drove the passion with which I wrote. I suspect that energy is something we all hope to leave behind when we leave this earth!

TJ: Your mom put in around ten years of research before she passed the project on to you. How helpful was it that she had already begun on this process, and what did that change for you along your creative and writing steps?

JG: It was a mix of emotions at first, from sadness that she’d no longer be able to continue the book herself, to the exhilaration of knowing what I was now holding onto: a story that I could craft into something unique within the mountaineering narrative genre. She had intended to write more of a traditional biography, but I was more interested in writing an adventure story. She hadn’t drafted any chapters, though she had done a ton of research that took many months to sort through. After I began writing, I consulted with her occasionally when I needed advice on direction or character development. She was able to read the final, published version of the book when it was first released six months ago.

TJ: The story and life of Christine Boskoff is truly unique and inspirational, and also involved many other interesting people. How did you handle the pressure and responsibility of sharing these tales to the world?

JG: Because I wasn’t interesting in writing a “gotcha” book with salacious details of her life, it was relatively easy for me to convey my intentions to her friends and family. Conversations almost always seemed to flow smoothly and naturally. I wanted them all to feel heard and I wanted to be able to shape her story into something that felt balanced. As humans, we act as many versions of ourselves to many different people. I felt my job was to capture the most authentic picture of her possible, so all her loved ones would recognize her. If they didn’t completely agree with the portrait I painted, I hoped that they would at least understand the process that I took.

TJ: Although most of us wouldn’t dare to endure the strenuous climbs that Edge of the Map highlights, how do you think that everyone can benefit from reading about the journeys and people celebrated in this book?

JG: Often writers come to a project like this with a framework that they’re very attached to before they start talking to others or doing research. I was quite the opposite. I had a few threads I knew I wanted to cover, but I very much let the research and interviews drive where I decided to go. My outline was written in pencil, not pen, shall we say! It was critical for me to write in a style that would feel accessible to people who love adventure stories, but without all of the technical details that sometimes accompany these books.

"I was really aiming to write a mountaineering book for non-mountaineers. The messages of Chris’s life include those of resiliency and humility, and ultimately transcend her sport." -Johanna Garton Click To Tweet

TJ: Chris’ story is very intriguing, as she was truly one on a kind. Some of the emotional aspects include her relationship and life with Keith, and her transition into finding a new partner in Charlie Fowler. How important are these human elements in shaping the full picture of Chris as a person?

JG: Those parts were absolutely critical to weave into the story. Prior to Edge of the Map, almost no books existed in the category of mountaineering lit that focused on an American female mountaineer. In addition, it was very clear to me that most books in this genre are written by men, and many of them lack the personal depth of character I was able to see in Chris’s journals in particular. So yes, I knew that what I wanted to write was going to have humanity and depth of personality, something I think can be missing in other mountaineering narratives and makes Edge unique.

TJ: You spent a lot of time getting to know Chris through her journals and immediate family, especially her mother, Joyce Feld. How can you describe the relationship and bond that you and Joyce built, and how important was she to sharing Chris’ entire story?

JG: Oh, she was and still is a fabulous woman full of wit and lightness. Getting to know her certainly helped me understand Chris much better. Joyce and I have stayed in contact and she’s become almost like a second mother to me. Which is ironic, given that she lost her daughter to the mountains and I’ve slowly lost my mother to Parkinson’s, which led me to the story in the first place. Life weaves these funny webs all the time, doesn’t it?

TJ: Edge of the Map describes the process and complications of discovering where to look for Charlie and Chris when they went missing on Mt. Genyen, as they didn’t actually obtain permits for their climb. What did you learn about the various difficulties and expenses involved in the climbing world that surprised you?

JG: I had a ton of questions about the sport when I started, and this is one of the reasons I found the project so compelling! I wanted to understand the motivations and drive of climbers. Though this is a timeless question that can be answered a hundred ways, I do feel I better understand parts of this mentality now. It’s become clear to me that, like a passion ANY of us have, the desire to climb high peaks comes from a sense of feeling alive.

While many outsiders perceive mountaineers to have a death wish, in actuality climbers are following deep feelings and emotions. Because there’s this elevated level of risk, I think the sport draws people who feel entitled to criticize choices climbers make. Most passions that the rest of us have rarely are criticized with such scrutiny. That became a source of frustration for me, and I think it can be for climbers/mountaineers.

Quite simply, they believe that without climbing, they wouldn’t be living their authentic lives, just as the rest of us would feel if we were not pursuing more conventional passions such as parenting, fostering animals, worshipping God, traveling the world, etc. Certainly families and children add a complicating factor, but I do believe most climbers take into consideration those in their lives when weighing the level of risk they accept within their sport. That said, there were many controversial moves that Chris and Charlie took on that last expedition, including not obtaining an expensive permit and deciding to climb a mountain that was considered sacred. All of these decisions I realized are deeply personal, for better or worse, and can define how the world views each climber in both life and in death.

TJ: Throughout the process of researching and telling this story, you got to know Chris as well as possible. If she could give the rest of the world one piece of advice, what do you think it would be?

JG: I believe she’d encourage us to look within ourselves for the answers we’re seeking about who we are, what we want out of life, what brings us joy, etc. She believed fiercely in tuning out the noise as much as possible and seeking a life that was true and joyful, even if it was unconventional. I’ve tried to carry that into my own life and I hope readers do as well!

TJ: As you mention in the author’s note at the end of the book, you travelled to see Mt. Genyen, the location where Charlie and Chris’ lives came to a sudden end. How can you describe your experience there, and what encouraged your trip?

JG: Transformative is the word that comes to mind. I very much believed that I needed to walk the steps Chris and Charlie had walked in order to understand the beauty in their last few weeks. The trip to Genyen helped make sense of it all for me. I understood all that they saw in magical, undiscovered places. It helped me come to a place of peace with their deaths, and then translate that sense of peace to the last pages of their story. So many mountaineering books end in tragedy and though this one does as well, there is absolute inspiration in the end. That trip helped me craft those last bits.

American Mountaineer Christine Boskoff: Searching for Truth on the Edge of the Map was last modified: September 13th, 2021 by Ty Johnson
PLEASE SHARE AND HELP US SPREAD THE WORD: