EDM Sensation Jay Hardway: Carving a Life-Path On and Off the Stage 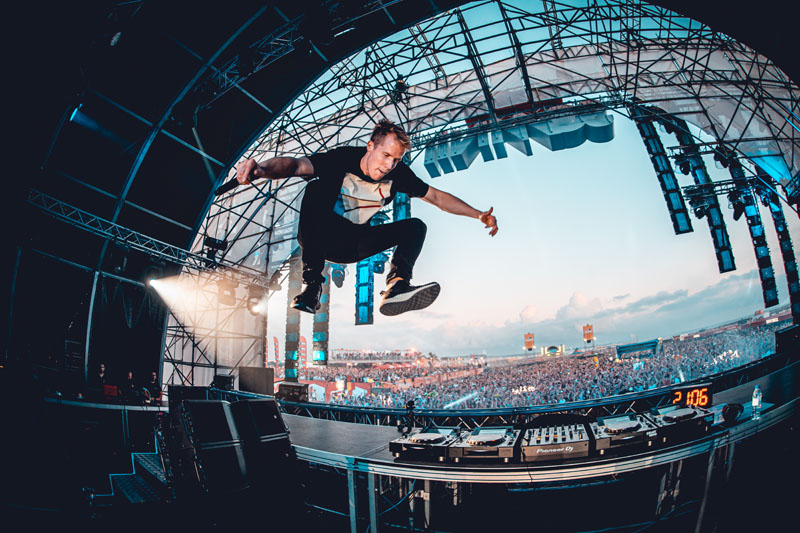 Electronic Dance Music producer Jay Hardway hails from Drunen in the southern Netherlands and has been DJing since the age of fourteen. Influenced by the producers of his youth, Jay used his natural love of music to harness his talents and establish an impressive career.

After relocating to Amsterdam, Jay teamed up with Martin Garrix for his first professional release, which catapulted the duo into a successful partnership that continues to this day. Their song, “Wizard”, racked up 3.6 million views on YouTube in its first week, and “Spotless”, their 2016 smash, garnered over forty million.

This Face the Current Music Feature is published in Issue 29. Order PRINT here, SUBSCRIBE to digital edition for unlimited access, or continue reading this article below.

With a very large and dedicated social media following, it’s no wonder that Jay has 1.2 million monthly listeners on Spotify alone. In fact, his top songs have twenty to thirty million plays each which helped him earn the sixty-fourth spot on DJ Mag Top 100 DJs poll in 2018.

Face the Current and Jay discussed many facets of his life and career including the balance he strikes between life on and off the road, the ways in which he gives back to the music production community, and the benefits of his fruitful remix collaboration contest.

Santina Murin:  From the inspiration to the title and the artwork, your single, “Operation Unicorn” is such a unique and fun song! From where was it all born?

Jay Hardway:  The track itself was born a couple of years ago, but back then it was only a melody with kind of a classical music vibe to it. I thought I couldn’t really use it in a Jay Hardway track, but when I reconnected with the melody a couple months ago, I had the inspiration to finish it! As for the name, I always try to come up with unique names for my tracks. I think there are enough boring track names out there, so I always try to come up with something fun. The artwork is the amazing work of Bart van Haren. He works for Spinnin’ Records and I always go straight to him when I need any artwork!

Creativity comes from the mind. It’s important for starting producers—or any artist—not to feel constrained when it comes to creation.

SM:  Your first release was a collaboration with the then unknown Martin Garrix, so it’s no wonder that joining forces again with your fellow Dutch DJ legend would result in more beat-dropping magic. Can you tell us what went into your collaboration for the song “Wizard”?

JH:  Martin and I became friends before we released any music. We enjoyed making a lot of music, posting it on forums, and playing small, local shows. We decided to meet up in the studio because we liked each other’s music and it turned out to be a great creative collaboration. We made countless songs and started many projects in a relatively short period of time. “Wizard” was a combination of elements from songs Martin and I made. That was usually how we worked—just combining melodies and sounds of each other’s projects. “Animals”—Martin’s number one hit—came out and “Wizard” was the first single after that; it was an amazing boost for my career.

SM:  You’ve shared your appreciation for a normal routine when you’re not touring, including the importance of getting enough sleep and having time for music, family, and friends. However, you also have an addictive love for touring, as well. What are some of the ways that you stay balanced, happy, and healthy (both mentally and physically) as you fluctuate from life on and off the road?

On and off the road, staying perfectly balanced mentally and physically is impossible, and I think realizing that is the most important thing. You can’t make everything perfect; you can’t really blame yourself —or anyone else for that matter—for that, either, so that gives me some peace mentally.

I’m trying to stay fit as much as I can; working out, eating healthy, and not drinking too much alcohol. It’s all pretty standard stuff, but sometimes it’s harder to maintain than it sounds. But, if you try your hardest, you can be proud no matter what.

SM:  Do you have any fun stories behind any of the names of your tracks?

“Electric Elephants” is still my favorite track name because it’s funny and yet it still sounds cool. If you listen to the track, you can hear a cool sound in the buildup and second break, and if you use your imagination, you can hear those sounds as giant electric elephants walking around.

SM:  You creatively do a lot to give back to the EDM community, whether it’s with your YouTube Studio Time Session, or offering remix contests for your songs. Do you feel this aids in helping to inspire and encourage those looking to pursue music production as a career?

JH:  When I started making music, there weren’t as many tutorials online as there are now, and those that were out there were difficult to understand and very technical. I want to show producers who are just starting out that it’s not all about what software you use or how everything works technically, but rather, it’s that creativity comes from the mind. It’s important for starting producers—or any artist—not to feel constrained when it comes to creation. So, by breaking down my projects, I’m hoping to show that it’s not that difficult to create the music as long as you have a good idea.

SM:  When you held the remix contest for your song “Wild Mind”, roughly how many songs did you have to choose from and how long did it take you to make a decision? What was it about MLSTRM that solidified his win, and will there be future contests/opportunities like that again?

JH:  Spinnin’ has a great team who went through the first remixes and gave me a selection. I then had to choose a winner from that grouping and it was VERY difficult. The production level was very high and, in the end, it was MLSTRM’s originality that made me choose him as the winner. His remix was his own style and he incorporated the original melodies of the song in a very cool way—he didn’t just put my vocal on an existing project. It’s very cool to see what other producers can do with my melodies, so I hope to do more contests like this, for sure.

SM:  What have been some of your “sweetest escapes” from your typically nonstop touring and producing schedule?

JH:  Traveling to Namibia was amazing! It’s a big country, the natural landscape is so beautiful, and the people are very warm and welcoming. It was an amazing three weeks without using my phone, too. I would recommend it to anyone who truly wants to “switch off”.

SM:  You’ve shared that one of your 2020 hopes was for everyone to slow down a bit and take some time to think about what matters. In the midst of the current state of the world, do you think that we are not only encouraged but forced to take that step back?

JH:  Wow, I hadn’t thought about it in that way! I think this situation definitely forces a lot of people, especially artists, to stop and think about what they are doing. We don’t have a lot of distractions right now and to be in the DJing business right now without making any money for the foreseeable future, you really have to want it/be in it for the right reasons. So, it’s a crazy situation that includes a lot of bad things happening to a lot of people, but a lot of good will come out of it as well, I think.

SM:  When things go back to “normal”, how do you feel your own music and the industry as a whole will flourish after so many isolated artists have had the chance to simply create?

JH:  I think everything will be different. The industry had become more and more about business, and perhaps that will change for the better.

SM:  From your start in DJing at age fourteen up to the present day, what is one of your most vivid and treasured stories/memories?

JH:  It sounds weird, but the best time creatively was probably those first years in my parents’ house when I just started out. I wasn’t making music for anyone but myself—it was true creativity with no pressure of business and/or time.

SM:  With the debut of your newest track, “Rollercoaster”, could you ever have predicted that the world would coincidentally and collectively be on a rollercoaster ride right now? What are you most excited about with this track, and what was the idea behind the name?

JH:  I’m super excited about this track, especially because it’s my first release with Musical Freedom, the label of legend Tiesto who has been an inspiration to me for as long as I can remember. The idea behind the name was that my life has been a rollercoaster the last couple of years, with crazy highs and lows. But overall, it’s been a thrilling and mostly positive ride. But no, I definitely didn’t expect the world to be on a rollercoaster the way it is today.

EDM Sensation Jay Hardway: Carving a Life-Path On and Off the Stage was last modified: March 30th, 2022 by Santina Murin

Santina Murin is a young spirit and old soul eager to travel, explore and expand. After graduating from college in 2015, she spent time learning more about herself through new experiences in California, Oregon, and New York. After recently moving back to her native city of Pittsburgh, Santina is intent on nding a newfound love for “home.” Santina loves expressing her creative side through writing her own poetry, but there’s nothing that makes her feel more alive than being in the presence of live music. More than anything, her soul shines brightest from the ow of connection through conversation with artists she’s so passionate about. www.borntovibe.net