Energy-Balancing in Nature: Harmonious Lessons from the Great Owl 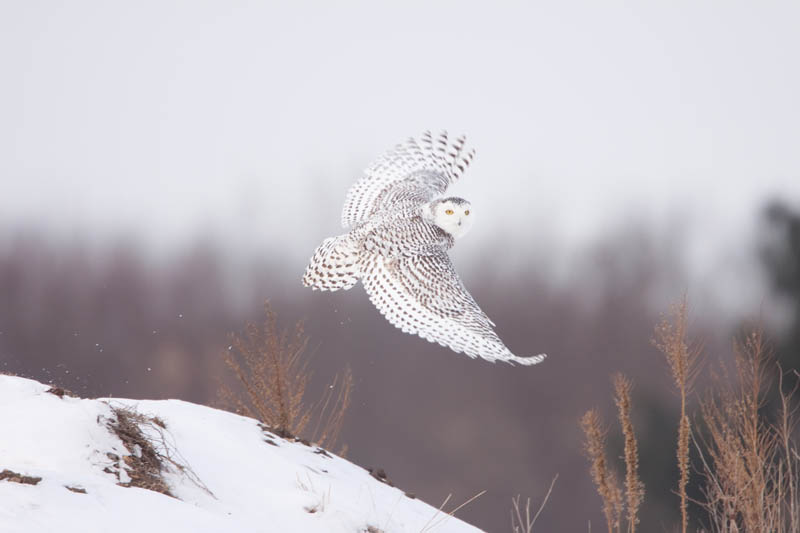 “Wise as an owl” is a ubiquitous phrase, but from where did it originate? The answer to this connection dates back to ancient Greek mythology where Athena, the goddess of wisdom, was traditionally accompanied or represented by an owl. Though wisdom is a commonly associated attribute, owls carry various meanings in other cultures around the world. In ancient Egyptian, Celtic, and Hindu cultures, owl symbolism centered on guardianship of the underworld; they were seen as protectors of the dead and rulers of the night. In Native American cultures, the owl is associated with wisdom and foresight and is viewed as the keeper of sacred knowledge. In Aboriginal Australian and West African cultures, owls are considered to be messengers of secrets and companions of seers, mystics, and medicine people. In medieval Europe, owls were thought to be witches and wizards in disguise.

This Face the Current Culture Feature is published in Issue 22 / Winter 2019 – co-authored by Ainsley Schoppel and Penelope Jean Hayes.  Order PRINT here, SUBSCRIBE, or continue reading this article below. 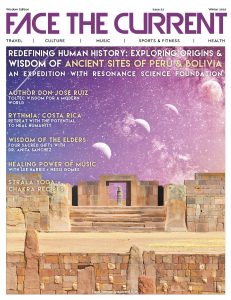 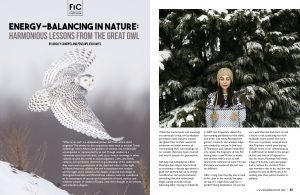 While the connections and meanings are obviously varied, owl symbolism permeates many cultures around the globe. Due to their nocturnal predation and silent manner of commanding their surroundings, it’s no wonder they have been revered and held in esteem for generations.

Self-help and metaphysics author Penelope Jean Hayes experienced an encounter a decade ago where a giant owl opened her up to energy recalibration and synchronization, something that she instinctively began calling osmotic-energy- balancing. After moving to Nashville in 2007, she frequently visited the surrounding parklands to hike, think, and write. Like many, Penelope felt greater creativity and wisdom when surrounded by nature. In that area of Tennessee just outside Nashville’s city center, the fragrance of late Fall leaning into a new Winter is musty and earthen with a trace of soft tannins like cellared red wine. The day Penelope encountered the owl was no different. 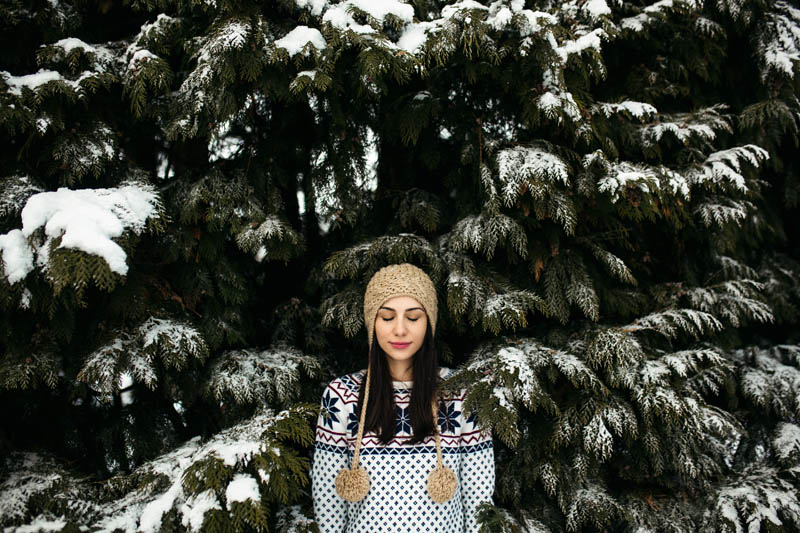 After a long trek that day, she arrived at her spot in the woods; the spot on top of a ridge that made for a perfect hiking destination. (It was the very spot that she had once carved a heart in oak containing her now husband’s name joined with hers. This was a symbolic remembrance that Penelope visited even during difficult times in her relationship, as it reaffirmed her belief in the power of love and nature.) Prepared to stay for hours, Penelope had water, a bag of almonds, a pen and paper, and a cushion for comfort. There was nowhere else to be, and she was content to stay all afternoon, if for nothing else than just to breathe in stillness.

The forest was dense; a different world from the nearby city. There were no sounds of traffic, only the rhythm of a twig-crackle followed by silence, trailed by a bird call, punctuated by more silence. Penelope pondered life, wrote about it, and sat in gratitude. Whether or not she realized it at the time, her practice was a meditative form of spiritual medicine. The vegetation canopy of the expanse before her opened up to a vantage-point exposing rolling hills of orange and green backcountry that transitioned to a spectrum of monochromatic yellows and reds. She sat and admired the trees gracefully bending in the wind. Penelope listened to the leaves dancing and ruffling in the breeze like a hundred million tiny chimes. Together, the music and choreography of the spectacle were as ironic as an animated Disney classic, replete with the flitting of busy birds and the stumbling of lanky fawns. Chipmunks nosed their way under groundcover, making a ruckus louder than she would have expected from the pip-squeaks that would eventually emerge. The scene was a symphony of the senses and each layer of it was in harmony with the next. The forest was alive with movement and sound, yet it was also calm and peaceful. Soon, Penelope was not writing or thinking, she was just being. She was perceiving without judgment and without feeling the need to attribute or label her experience with words. She might have already been immersed for two or three hours when a shift began.

Penelope started to slowly see the colors around her grow more vibrant. It was beyond three dimensional; she was seeing the forest in another dimension as it popped up before her with incredible depth. Perhaps the wilds were exposing the fourth dimension. It was not a hallucination or the result of a substance-enhanced trip, and it wasn’t a vision or even a dream. Rather, it was a clear-headed perception of the environment around her in its raw and unmasked state. Everything became lighter, shimmering as though Penelope could see the actual energy-field of the forest. It was ethereal and vaporous, where each element of the environment was a fraction of something unbound, like the in-between essence of a bubble as it bursts. 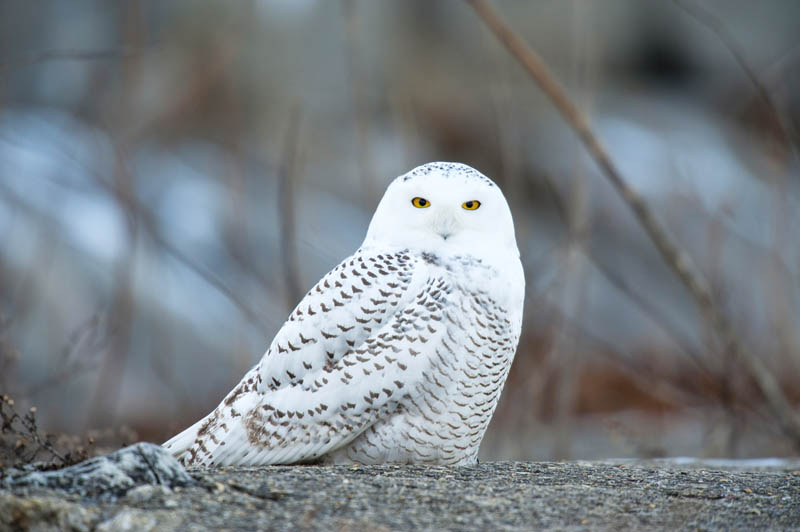 Just then, a large body moved in Penelope’s right vision. With a span as wide as a car is long, it kited on the air, slowly, silently, and seemingly with authority. The Overseer had arrived, and he was a giant owl. Without a single flap, he pulled in his wings and mutely landed on a branch in front of her. Not six feet away, he was directly across from Penelope’s position on the cliff. For long, peaceful minutes, she remained locked on him as he went about his wide-eyed business of surveying the area with a confidence that was both steadfast and resolute. Time slowed, yet Penelope was not measuring it or concerning herself with doing anything; she was only observing and being observed. The owl was aware of her presence but was neither concerned nor bothered by her, and it did not fear or avoid her. Nature had accepted Penelope and she was one with the forest. This reminded her of primatologist Dr. Jane Goodall’s first immersion in the jungle of Tanzania’s Gombe Stream National Park in 1960, and how she did nothing but sit in close proximity to the wild chimpanzees without imposing herself upon them. In time, Jane’s energy assimilated to the natural world and the great apes accepted her. There on the cliff, exchanging energy acceptance with the owl, Penelope achieved the same. 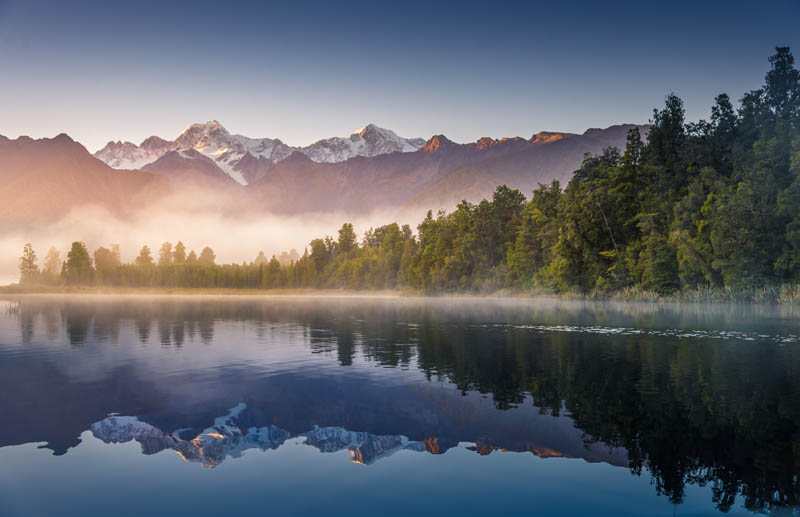 It was through Penelope’s own experience of this visceral intimacy with Creation that she gained awareness of its built-in process of energy-balancing, one of nature’s magical portals to Universal Intelligence. She also realized that when hunting, the owl had to be completely in-tune with the environment if he was to be successful. When Penelope encountered the giant owl that day in the forest, her energy field synchronized to vibrate in harmony with her surroundings as well. In that state, Penelope was incapable of causing discord to the energy around her; she was one with it. The great owl recognized Penelope as part of its environment and for those moments, her energy was completely balanced with nature.

Whether it’s wisdom, foresight, protectiveness, or magic, owls can represent many things to many people. For Penelope, the owl she connected with taught her about quiet observation, stillness, and environmental energy-balancing. In this all too frequently frenetic world in which we live, perhaps we can emulate the calm yet alert energy of the owl to survey our surroundings and calculate our next move in life. With energy-balancing as a first step, anything is possible.

Upcoming Book Release: The Magic of Viral Energy: A Guide to Supernatural Happiness

Penelope Jean Hayes is a contemporary philosopher and theorist, host of “PENELOPE: A Podcast Show” on Apple Podcasts and iTunes, and on-camera television host. She is the author of the upcoming book titled, “The Magic Of Viral Energy: Spirituality Meets Quantum Theory,” about the contagious nature of energy. Penelope has appeared as an expert for numerous TV programs including Dr. Phil and ABC News; and has been quoted in Men’s Health Magazine.