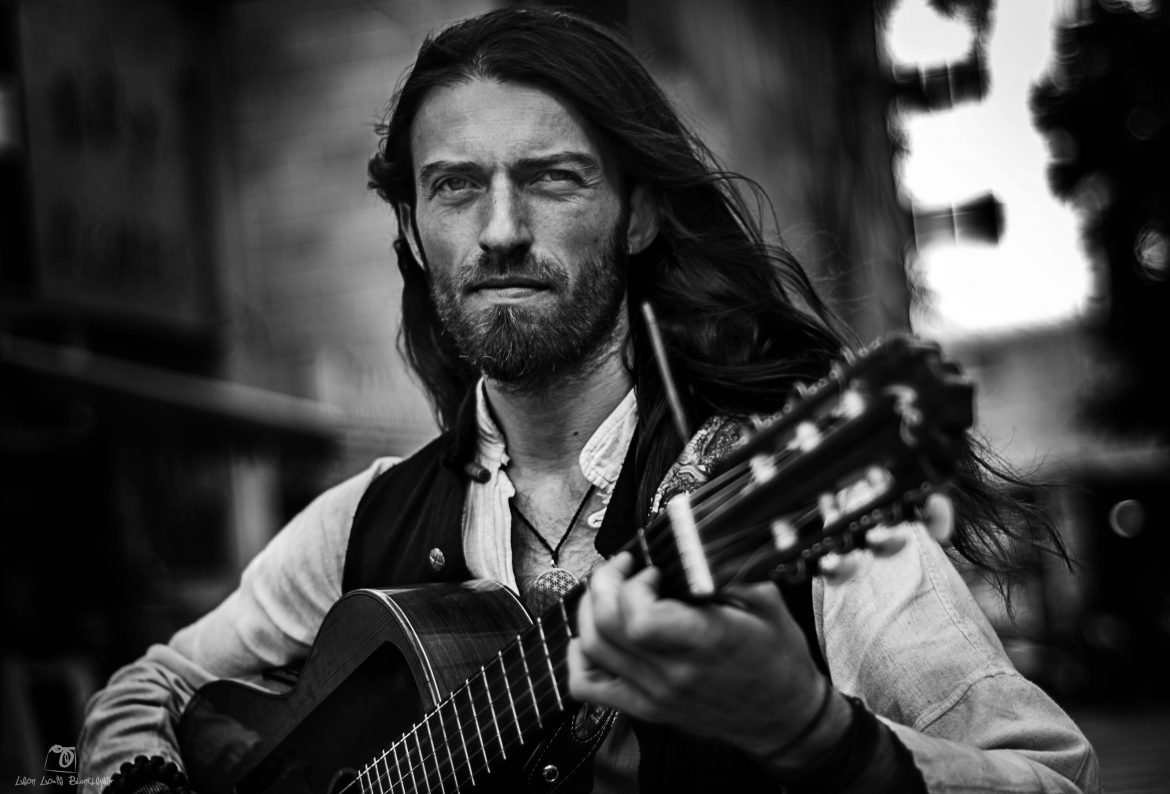 The history of troubadours dates back to 1100 in Southern France where composers and performers of lyric poetry entertained the masses. Though some troubadours remained in one location for lengthy periods of time performing under the patronage of wealthy noblemen or women, many troubadours consistently traveled and performed at one court after another. The lyrics of troubadour songs were mainly centered around the concepts of chivalry and courtly love, and most followed a formulaic pattern of composition and were metaphysical and thought-provoking in nature.

As history knows them, troubadours all but vanished with the Black Death in 1348. However, though courtly performances now look more like viral music videos, contemporary versions can still be found.

Self-expressing spiritual guitarist Estas Tonne considers himself to be one such modern-day troubadour.

This Face the Current Music Feature is published in Issue 29. Order PRINT here, SUBSCRIBE to digital edition for unlimited access, or continue reading this article below.

Stanislav “Estas” Tonne was born in the Ukrainian Soviet Socialist Republic and began playing the guitar at the age of eight. After showing a talent and passion for the instrument, Estas began studying classical music at a local music school. When his family moved to Israel in 1990, Estas disconnected from the guitar and stopped playing altogether for eleven years. In 2001, he moved to New York City and reignited his love of music by playing a six-stringed classical guitar, and he joined violinist street musician Michael Shulman in a duo. After reestablishing his connection to music, Estas began traveling around the world as a solo musician and performed in concerts and at street, yoga, and art festivals. True to his troubadour connection, Estas has rarely lived in the same location for more than a year and continues to travel the world and share his sound.

“Music isn’t a career to me, it’s life. When I started to play on the streets, I just lived my life and I keep doing so today.  Life includes it all: pain and healing, sorry and joy.  Within the polarities there is a great guide that keeps it all together and it’s in all of us; just feel.”

Just like the troubadours of old, Estas doesn’t view his life in music as a job. “Music isn’t a career to me,” he said, “it’s life. When I started to play on the streets, I just lived my life and I keep doing so today.” Life isn’t always uplifting and inspirational, and Estas is open to the experience and influence of all states of being. “Life includes it all: pain and healing, sorry and joy,” he explained. “Within the polarities there is a great guide that keeps it all together and it’s in all of us; just feel.”

Through the help of Spotify, YouTube, and social media, Estas has amplified the reach of his mesmerizing guitar-work to the tune of millions of listeners. His song, “The Song of the Golden Dragon” has been viewed over seventy-five million times on YouTube, and after watching and listening to the music unfold, it’s clear to see why so many feel a connection to the hypnotic and moving sound-story.

“It took years of experiments to feel the right sound that works for me,” Estas noted. It’s his combination of all the elements of composition and performance that lends to an enchanting sound. “If a chosen sound works for you, stay with it; feel it.”

Once a musician has captured his or her sound, the next step is usually to compose and record pieces of music to grow a catalogue and use for performances. This, however, is not how Estas works. “I don’t have an interest in capturing something that could never be the same. An individual is changing each day and so does music,” he explained. “We could truthfully play the ‘same’ song every time only if we also express that true feeling we feel every time. In this case it would never be that ‘same’ song because we aren’t the same but rather are different in every moment.”

His most recent project, Cuban Heart, was inspired by a song entitled “Cuban Dance” that he, along with most children in the former USSR, learned in music school. This song instilled in Estas a passion to explore cultural dances and flavors of the world.

Life has all kinds of flavors; it’s all included. The dance of life has it all.”

In 2017, Estas traveled to Havana, Cuba to experience the culture behind his beloved childhood song and he became enveloped in the nuanced and multi-dimensional lifestyle and heritage of the country. “For us, going to Cuba was a significant move as somehow, we were teleported in time to the childhood we still had a memory of,” Estas confessed. “By the way,” he added, “this is the only place on Earth where old cars from the United States and the Soviet Union are living, driving, co-existing side by side as a symbolic expression of what is possible on Earth: to be, share, and have a place for all the colors.”

Following his inner guide, Estas experienced life in Cuba as it unfolded, including unexpected encounters and connections. The resulting visual-sound journey, Cuban Heart, is a tribute to Cuba and its people and is brimming with warmth, color, nightlife, breath-taking natural vistas, and the spirit of many hearts. Estas’ stirring Latin guitar sounds accompany the video along with the trumpet, bass, and hand drums played by Cuban musicians. The video and music are also heightened with the stirring vocal performances of Miriamne Martinez Ramos and Jose Antonio Santos Isers, and the featured drum circle was a spontaneous addition that captured and showcased the Afro-Cuban energy of the entire experience.

As Estas likes to make clear, the enchanting result of Cuban Heart is because of the direction of Life itself; “Literally every meeting, every recording, every shot wasn’t planned,” he said. Because the recordings in Havana were captured in their natural state, it has taken almost three years to polish and finalize the project.

“If one could hear the original files we had and the way it was recorded, and then compare it with what it became, it could serve as a stunning example of what patience, persistence, dedication, mastery, and quality are about,” noted Estas. “What glues all these particles together is love in its all-including essence.”

“The evolution of a human heart is like a million-year-old diamond shaped by nature—what matters most is not how many songs we play, but how the Song of the Heart has evolved throughout lifetimes!”

Estas expressed. For him, Cuban Heart, Golden Dragon, and any other song or project is just a title. “They are just a moment that is always changing, always evolving as Life itself,” he stated. Keeping that perspective in mind, Estas likes to encourage the musicians, searchers, and free-livers of this world to look to Life itself for lessons and learning opportunities.

“Your only purpose here is to be yourself, and Life teaches it very well.”

Nahko: The Voice of a Generation