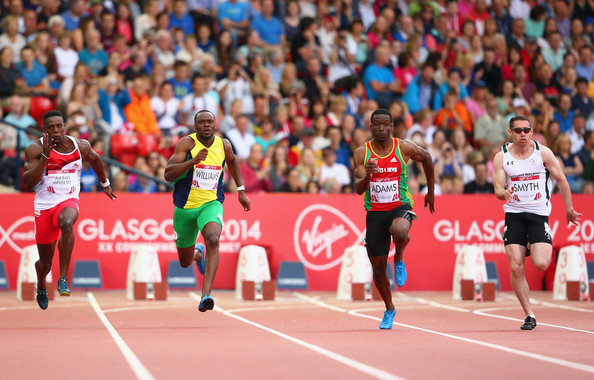 Born on the tiny island federation of Saint Kitts and Nevis in the Caribbean, Antoine Adams has honed his talents and found success as an Olympian and world champion sprinter and a music producer.

Adams was exposed to both track and music at an early age by his father who brought him along to band practice, where over time, he developed a natural ear for music, taking great interest in all the instruments played and learning to play the drums, bass and piano by ear.

His professional track career officially started in 2011 at age 23 and he has since competed in the Olympics, World Championships and many other International competitions around the globe against some of the world’s highest level of athletes, including Usain Bolt.

His title of the “World’s Fastest Music Producer” comes from his local fans as he produced music for some of the top music artists in Saint Kitts and Nevis, including local sensation “Infamus.”

I simply live by the motto “Life is short, make it count.”  Whatever dreams and goals you have in life you should just go out and do it, no excuses.  Do not let anyone ever tell you that you cannot do something.  The sky is really the limit.

At what point in your life did running become a passion for you?
I have been running ever since I can remember.  I was always the fast kid as a child, full of energy and playful. I think it really became a passion in 2011 when I started to travel around the world.  I really enjoy seeing new places and experience different cultures.

What inspired you to start producing your own music for training?

One day I just loaded a bunch of my beats onto my iPod, mainly to listen to the mixing and hear if I needed to make any adjustments.  I realized that I liked focusing on the beat, without lyrics and it proved to be something I would continue to use for years. With the right song or beat music gets me pumped, motivated and in the zone. It distracts me from pain and gets me through some intense gym workouts.

In addition to music that can be used to motivate in fitness, you are creating tracks for many other purposes as well on your website.  Can you tell me more about what you offer?

Download A Beat is my online instrumental licensing company where people can come and purchase a license to use the beats in their projects.

How does a typical day’s training compare to your pre Olympics training?
A typical full training day would have me getting up at 4:30 am to get to the gym at 5:15 am for my weight-lifting session.  The session usually lasts about 2 hours on the intense days.  I would then rest until about 11 a.m. before heading out to my second session at the High Performance Center, which can also get pretty intense.  My last session would be on the track at the stadium, where I would finish off with some tempo runs and/or sprints.  I sometimes work on music projects at night till about 1 a.m., but I usually like to go to sleep and wake up early and then work on projects.  This way I get the necessary rest and have a balance.

Tell us about the ambience at the Games this year, the interaction between athletes on and off the track and how you spend your time off during the Olympics?
The best athletes from around the world have come together to compete at the highest stage in sports.. It does not get any better than this. At the Olympics it is about competition, but also about creating forever lasting friendships. We are one big family of athletes and it is all love at the end of the day. I really like to laugh and have a little fun before competition. It relaxes me. Other than that I am listening music and playing video games.

You once said “Some people succeed because they are destined to, but most people succeed because they are determined to.”  Is this a motto or philosophy you live by?
I simply live by the motto “Life is short, make it count.”  Whatever dreams and goals you have in life you should just go out and do it, no excuses.  Do not let anyone ever tell you that you cannot do something.  The sky is really the limit.

Get ‘Purified’ On Nature & Music With...