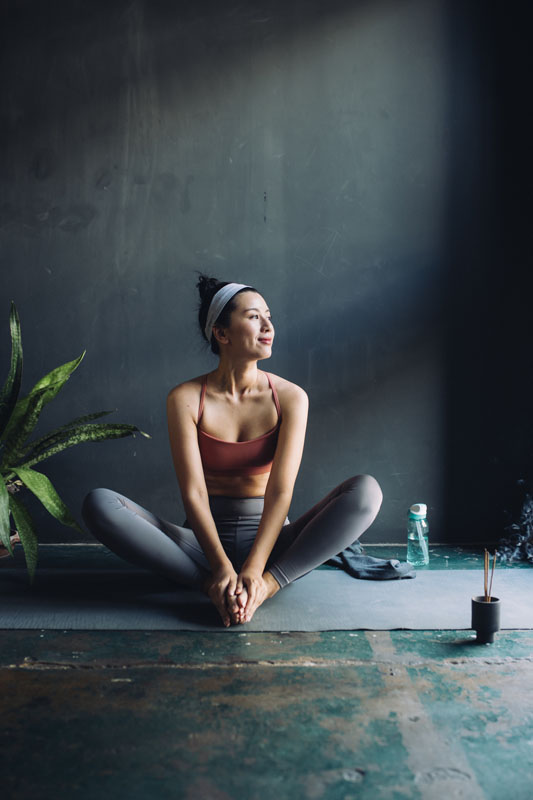 This time last year, I would have sworn on my stack of running shoes that I was living my best, healthiest life. I was in Costa Rica running barefoot on a beach, drinking water straight out of coconuts and doing poolside yoga every morning. Two weeks later, I’d be heading to Spain to a favorite cycling destination, Girona, where I’d coach cycling camps and run in the foothills for four straight months. These destinations were scenic and charming, and best of all, they let me push the limits of my training as a trail runner.

And then, the world shut down.

Borders and airports started to close, and isolations, quarantine periods, and lockdowns soon followed. After forty-eight tense hours, we were finally on a plane heading back to our home in Ontario, and I started to worry what the next year of my life would look like. Visions of couch-potato-dom danced in my head and I felt a few claustrophobic pangs. Chasing good weather for training and coaching, and my decade-long love of the nomadic lifestyle ended overnight.

This Face the Current Sports Feature is published in Issue 32.  Order PRINT here, SUBSCRIBE to digital edition for unlimited access, or continue reading this article below.

Looking back at the last eight months, the irony is that despite not doing sprints on a beach in a different part of the world, I’m healthier than I’ve ever been. That could be because—as an editorial from two researchers in the Asian Journal of Sports Medicine pointed out—this time away from race days and big goals may actually benefit athletes. The authors noted that this slower time could be used by athletically inclined people as a chance to work on technical skills, nutrition, mental preparation, and rest. “This detraining period helps athletes recover injuries that have been irritating, strengthen energy supplies, rest more, and practice relaxation techniques,” they wrote. “The physical and mental rest will support athletes against burnout when the sport returns.”

Of course, this applies to professional athletes who are typically training over twenty hours each week. Even still, I think a lot of it is applicable to the rest of us—the adventurers; the athletes who juggle full-time work with a part-time love of their sport. If you love mountain biking and have been dreaming of taking part in a stage race like the BC Bike Race in Canada, or going on a rugged mountain bike tour of the best trails in Costa Rica, this pause may be the chance to work on slow-speed skills in your backyard or local park so that when you can get to the big events, you’re more technically prepared. In fact, whether you’re trapped indoors because of quarantine or because of inclement weather this winter, you can always work on honing your mechanical skills. When your tire flats halfway through your next race, you will know how to fix it.

It’s a shift in perspective, for sure, and it’s not an easy one—especially now that we’re nearly a year into the pandemic. When lockdowns began last March, it was easier to take an optimistic view and “use the time to better ourselves”. People picked up hobbies ranging from needlepoint to road biking, and despite the dire situation, the messaging seemed to be, “Let’s better ourselves! Learn a new language, start a new business, make every meal from scratch!”

As the months have worn on, it has become harder and harder to keep the optimism alive, and the narrative shift has downgraded to “just get through it”.

I understand that completely.

It’s exhausting to continually think of ways that we “should” be better. In fact, when I spoke to sports psychology expert, Dr. Alison Pope-Rhodius, she warned me that even using the word “should” is a slippery slope into despair and bad-feeling-territory. She was right: A few months into the pandemic, my “should-ing” brain and battered body hit a wall. I had maxed out the daily miles I could run and the weekly words I could write, and I was more overworked and over-trained than I’d ever been—despite not traveling outside of a twenty-mile radius from my home.

I didn’t need to take on new projects or new challenges, I needed to shift my focus to healthy habits that supported my long-term goals. Between traveling ten months out of the year, regularly racing, and shifting between writing projects and coaching camps, it was something I’d never been able to do before. For the first time in over a decade, the opportunity to create an actual daily routine was right in front of me, yet I was struggling to start.

Honestly, it’s easy to put in a few huge efforts—those big training camps where you pump out miles of running or riding; those few days where you do yoga and meditate twice a day for forty minutes apiece; those marathon work sessions where you pull all-nighters to pump out the report that’s due on Friday; that week you went hardcore vegan.

But to log consistent mileage every day; to actually stretch and pause every morning; to break that work report into manageable chunks spread out over two months; to actually eat more vegetables at every single meal? That’s where the magic happens, but it’s not very sexy.

As someone who loves a charming makeover montage, the allure of a daily at-home routine just doesn’t cut it. At least, it didn’t feel like it would until I forced myself to try it. The results weren’t instantaneous, but they did come, and without twenty-five-hour training weeks, I’m stronger than I’ve ever been. I realized that in order to speed up, I needed to slow down. If you can make room in your daily life, here are a few things that helped me to shift my health for the better:

Stock up on sleep.

When we first came home in March, this was an easy one, because frankly, we were exhausted. But by July, I noticed that we were almost always pouring a second glass of wine and cueing up “just one more” episode on Netflix. The result was an hour or two less sleep each night, made even more restless thanks to the wine consumption. The fix was simple, though not very fun to implement: we abided by a set bedtime (no matter where we happened to be in a season of a new show!) and a weekly limit on wine.

While an hour of yoga every morning is unrealistic, ten minutes of a quick flow feels doable and it’s an early win to start the day feeling healthy. (Don’t have ten minutes? Just do one minute of Sun Salutations or planks when you stand up out of bed. It’s a game changer, I promise.) We also bought a cheap doorway pull-up bar, and every time I pass under it, I do one or two pull-ups. Or, if I’m not feeling particularly strong, I hang from the bar and activate my core. We also walk every day, even if it’s just an extra five minutes around the block.

Add a vegetable to every plate.

I know there are plenty of people right now who have valid reasons for not being active, not properly eating, and not getting adequate sleep. Medical professionals, front line workers, and parents tasked with remote-schooling four kids while trying to keep up with a full-time job have packed and stressful schedules. Our current global situation isn’t changing anytime soon, but you can. I’ve seen people make huge strides in the last eight months because opportunities were taken away. When the gyms and restaurants closed, my younger sister dropped seventy-five pounds because she started running instead of driving to the gym to half-heartedly lift weights once a week, and she now makes all of her own meals instead of consistently dining out. You don’t have to pick up a new sport, learn a new language, or create a new business. But, can you add a vegetable, do a pushup, and just move more, in whatever way feels good to you? Start right now—and when you can travel to those far-flung montage-worthy destinations, you’ll be ready.

Molly Hurford is a journalist in love with all things cycling, running, nutrition and movement- related. When not spending time outside, she’s writing about being outside and healthy habits of athletes for The Consummate Athlete website and podcast. She also coaches running and cycling, as well as yoga, and she and her husband Peter host camps and clinics around the world. She also writes regularly for several outdoor and fitness publications, and her most recent project, Shred Girls, is a young adult fiction series focused on getting girls excited about bikes.