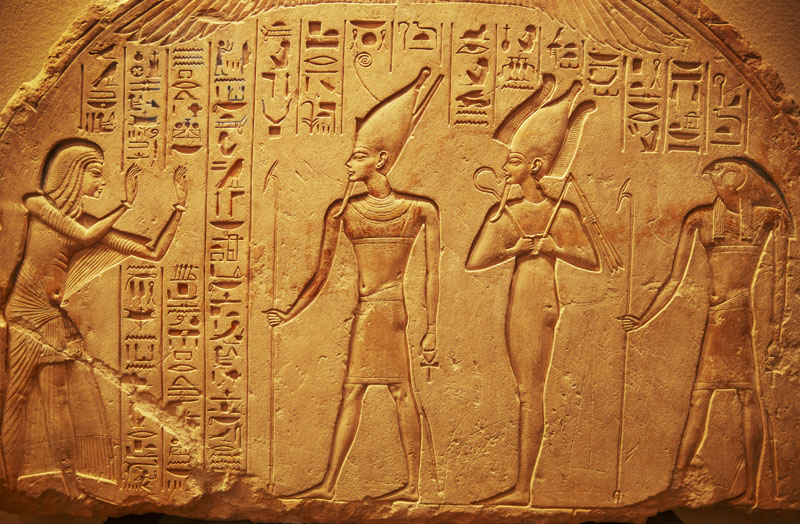 “Heka” is a very important and historical ancient Egyptian word. The kings of ancient Egypt were always represented holding the nekhekh and the heka—the flail and the crook.

But what exactly are these tools? Are they scepters? Are they symbols of power and submission? Or are they magical implements?

The nekhekh is described as a whip (flagellum)—a symbol of punishment and submission—while the heka is detailed as the crook of the shepherd; a symbol of control and leadership.

Heka means “ruler”, but originally it meant “the controller; shepherd”—the one who leads and directs the crowds. An alternative meaning is “the courthouse”—the place where silence is expected, and respect is given to the judge. In this form, “heka” is singular, and according to ancient Egyptian grammar, it can be pluralized by adding “w”.

Through deeper exploration of the heka—the source of many important words in ancient Egyptian symbolism—we can see that its roots are deeply magical. To decode the heka, it is important to understand that ancient Egyptians believed in the power of words and the power of their sound. There is a kind of music to the written texts inside the “temples and tombs”, and it is said that if the texts are read with a musical performance, a magical activation will happen.

To look further into hekaw’s magical connection, ancient Egyptians wrote “ntr”, meaning god, next to famous names we now know and mistakenly call “gods and goddesses”. However, ntr (or neter) is taken by the Romans and it became the Latin word “naturae”, meaning “nature”. When viewed through this lens, the ancient Egyptian gods and goddesses are forces of nature, not deities. For example, Neter Hathor is the lady of music, representing sound with harmony, resonance, and rhythm. Ancient Egyptians believed that the spoken word of neter Ptah was part of the story of creation, and daily rituals in the temples combined hymns and spoken rituals of neter Ptah.

Weret hekaw is the original title of Isis, and it is a title that can be given to anyone who can create great magic. Neter Isis was well-known in ancient Egypt as a great magician, however weret hekaw doesn’t mean “great magician”—it means “great magic”. Therefore Isis is the great magic itself, also known as the original inventor of magic. By replacing “t” with “d”, weret becomes wered/werd, and werd hekaw in Arabic means daily reading, or daily repeated texts.

Above, hekaw includes this symbol of man with his hand or finger inside his mouth; it means magical spells.

The following form of hekaw uses different symbols, and the symbol papyrus at the end means that this is a magical “written” spell.

The next title appeared this way in some temples, like Satet temple at Elephantine Island and Hatshepsut temple at Luxor, depicting two hands with a cobra in the middle. One interpretation of this is the action of waves or vibrations. The wavy shape of the cobra represents energy, and it is specific to healing or other venerable activities.

Isis has a very interesting symbol containing the tyet knot, otherwise known as the belt of Isis. It is akin to a large scarf or shawl—colored blood-red—and before she does her magic, Isis must unfold the shawl and place it on a table or the ground before she begins.

The male form of the title weret hekaw is wer hekaw, and this title belongs to Seth, the elder brother of Isis and Osiris. Like Isis, Seth is also magical and possesses the same power and ability. He also wields the wass scepter, also known as the scepter of power.

Magic is science and natural elements combined together to create unexplained phenomenon. A big part of magic in ancient Egypt is rooted in alchemy, but another powerful element of ancient magic is hekaw: sound vibrations. Everything in life has a frequency, and when you know the right frequency for the thing you want, magic will happen.

Remember the famous phrase “open sesame”—open yourself to it and let the good vibrations flow.

Mohamed Ibrahim is an Egyptologist, Hieroglyphics Expert & Tour Guide. Inspired by an equally passionate desire to share his wisdom, Mohamed Ibrahim offers a wide spectrum of knowledge regarding the history, arts, literature, and culture of ancient Egypt. Mohamed was born in Badrashien city which includes Memphis, Sakkara, Dahshur & Abusir, he studied Art and history of Ancient Egyptian, Coptic Egypt & Islamic Egypt at Helwan University in Cairo. He has been working as a tour guide and a teacher of Hieroglyphics for more than 20 years. Mohamed’s extensive knowledge of Ancient Egypt & the later eras along with his background in comparative religions and spiritual studies has enabled him to present his lectures inside & outside Egypt and conduct a variety of successful tours over the years.

The Power of Art to Change the...