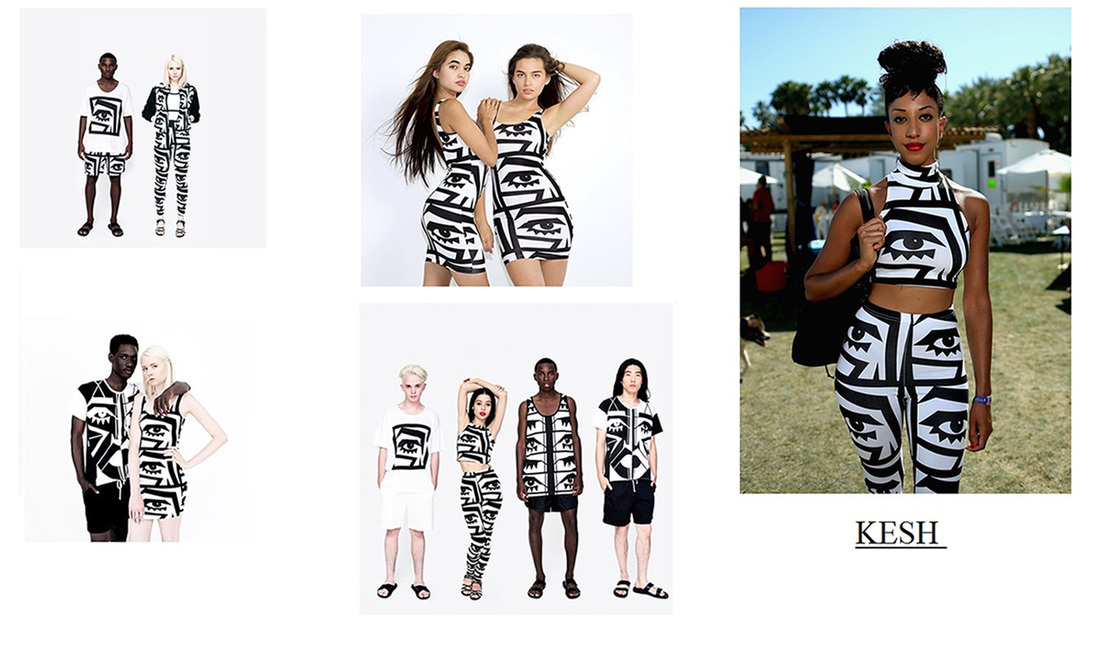 This incredibly talented LA based artist and designer has recently caught the eye of Versace.  And now, thanks to Versace’s bold move to copy her design, she has received waves of support and increased attention to her incredible collections.  Who’s the inspiration now?  We vote KESH!

British-born artist- Kesshia Kumari- who goes by the name Kesh, has shared images of the Italian label’s

spring/summer 2015 collection that has a ghastly mark up of $620 for the shirt that boasts the Kesh design.  Her artwork was being featured on a T-shirt and hat design collaboration for a collection with American Apparel that was inspired from the original artwork displayed in her first solo show.  Kesh’s signature print was being sold in American Apparel stores around the world, and became quite popular, even with celebrities.

So, what’s her next move?  Litigation is in the works, but is fashion design even copyrightable?  Will Kesh get anywhere with her case against the fashion empire Versace?  Michelle Fabio discussed a similar case with Gwen Stefani when her upscale Harajuku™ line had been used by Forever 21™on its own merchandise in a “virtually indistinguishable” way.  Gwen Stefani also filed an infringement suit against Forever 21™, and the question
was raised as to whether she could win her case.  Fabio found that “the Council of Fashion Designers, founded in 1962, says yes and has asked Congress to pass a federal law that would give designs 3-year copyright protection similar to that currently granted other art forms.” Yet others, such as law professors Kal Raustiala (UCLA) and Christopher Sprigman (UVA) take another standpoint.  They argued that copyrighting fashion is not ideal, suggesting that imitation breeds more ideas, therefore improving the fashion industry and business overall.

In the case of Kesh’s design, one might assume she’d be flattered by Versace’s move to copy her design.  As one fan commented on her Instagram, “Immitation is the highest form of flattery.”  Though he further admits, “Although I can’t imagine being imitated (copied) by Versace without compensation or credit and feeling very good at it.” That is the reality- it is just as shameless as the iconic fashion designs that are frequently turned into mock offs, sold at lower prices, and made available to the masses.  Reputation and the goodwill of Kesh’s business are equally at stake, and she is by no means flattered.  She is quoted saying “This hurts.  $650.  Versace rip off.  Sold out in 3 sizes.  What is this madness?  From huge designer labels to small boutiques to giant pop stars to fame hungry former friends.  What is this?  Why can’t these companies, these brands, these people create their own work?  What happened?  Why do these people think that everything instantly belongs to them?”

She further expressed a deep and long held admiration for Versace, but made clear her profound disappointment in their actions with artwork from her show that took her two years to develop and create.

KESH revealed “It is not only artwork from a collection that I created for American Apparel to provide something affordable and accessible to supporters of my work.  But this is also my face!  I can’t understand how something like this could happen.”

Well, even if she doesn’t succeed in her lawsuit against Versace, there is always karma!