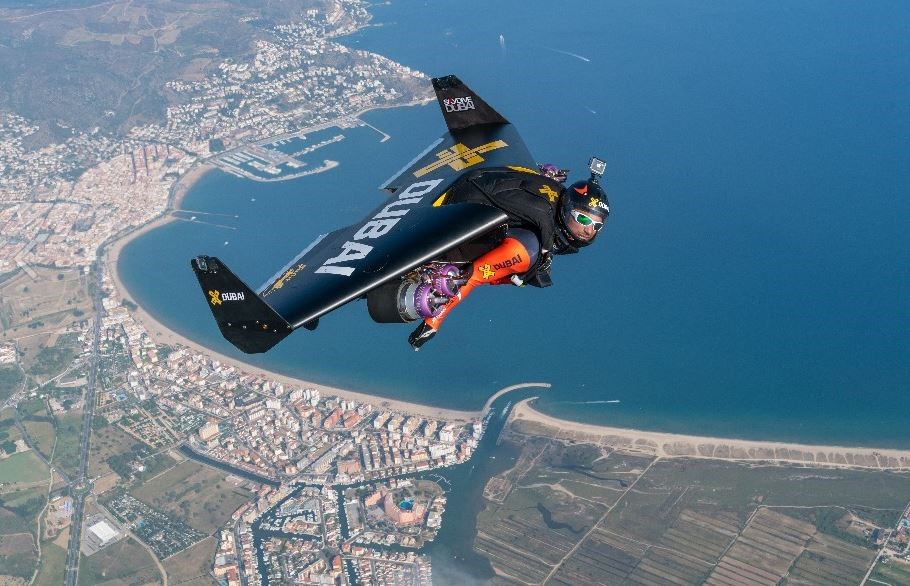 [vc_row][vc_column][vc_column_text]Vincent ‘Vince’ Reffet and his skydiving Maestro Fréd Fugen have spearheaded the world of skydiving for over a decade. They hold World Championship titles in FreeFlying and are masters of BASE-Jumping, canopy piloting, extreme landings, wind tunnel skydiving, wingsuit flying, and speed riding.

Vince has been Yves Rossy’s protégé since 2009 and earned the distinction of being the second person in the world to fly the Jetwing after 4 years of training. Together they completed the first two-way Jetwing formation flight over the skies of Dubai in May 2015 and the sensational formation flight with the Emirates A380 the following November.

Millions watched these exhilarating flights featuring the two jetmen, not encased in a flying machine as many have experienced, but in a rather more bird-like fashion, attached to an insanely-maneuverable, human-sized set of rocket powered wings. They have quickly become a global phenomenon.  This interview was in our first edition of Face the Current November of 2016, and has been one of the most popular (and exciting!) we’ve done yet. As we are now bringing the magazine online for our digital community, it wouldn’t be right to not bring Vince with us. Here we share a condensed version of the full article in the November FtC edition.

FtC: What inspired you to take to the sky?

The sky for me is freedom.  There is no limit in the sky.  I also come from a family of skydivers.

I remember very well my first jump – at the age of 15. As the plane’s door opened I was actually freaking out but the moment I stepped out and experienced that feeling of being held in the air… Oh, it was so incredible!

I haven’t stopped dreaming about flying ever since. And free-flying is the skydiving discipline I love most.[/vc_column_text][vc_single_image image=”1543″ img_size=”full” alignment=”center”][vc_column_text]FtC: Do you think anybody can truly understand the feeling of it without having experienced it personally?

It might be difficult to understand if you’ve never even tried a tandem skydive.  Many people feel sceptical about the experience of jumping out of an airplane or jumping from a cliff. After all, humans were not meant to fly. But if you push yourself a little bit and try a skydive, you will realize that it’s so beautiful and you’ll easily understand why we’re so addicted to that feeling.

I haven’t met anyone that landed from a jump and told me: “I didn’t like it.” They might say: “It’s not for me” and will add: “…but it was still amazing!”

FtC: I can imagine that it could become really addictive. I don’t know personally if I could get myself to jump…

You should push yourself and try! As a kid, even though I was coming from a family of skydivers, I didn’t want to jump. I didn’t even like roller coasters! When I became old enough to skydive, my dad never forced me but I eventually decided I should give it a go and try to jump once at least, even though I wasn’t into it. Well, look where I am now, living my dream and making a living from my passion. If I hadn’t tried, I would have never known.  You should do a tandem skydive and then give me call in a few months – I think you would be completely addicted to it!

FtC: Then you’ll strap some jets on me and really send me flying!

Flying the Jetwing is different from skydiving.  It’s still flying, but with one million percent of the pleasure, because you get to stay longer in the air and fly up. The Jetwing becomes an extension of your body and the feeling of freedom is pure.

FtC: You’re often referred to as a Soul Flyer.  How do you define what a “soul flyer” is?
The person who originally started the Soul Flyers team was Loïc Jean-Albert.  He is one of the pioneers in skydiving and wingsuit flying and among the very first professional proximity flyers. Fred Fugen and I joined the team in 2010 and it was just the perfect fit for us: we belong to the sky.  In another life I would have probably been a Condor – a big bird that doesn’t touch the ground for years…[/vc_column_text][vc_single_image image=”1544″ img_size=”full” alignment=”center”][vc_column_text]FtC: Down here on Earth it’s so easy for us to get caught up in our little bubbles and sweat the small stuff in life.  What is it like to experience how expansive life really is?

When I’m on the ground I get caught up in my own thoughts about life, like everybody. But when I’m in the air, I forget everything.  It’s like entering a different dimension that I get to share with my friends and family.  It’s so nice to be able to disconnect, especially from social media.  You see so many people spending so much time with their smartphone on Facebook – not even looking at each other or talking to each other. When you’re up in the sky, it’s just you, your feelings, and your friends.  I’m thankful for that.

It’s good to have fear in a way, especially in our sport. You just have to recognize what kind of fear it is and work with it. When I’m on top of a mountain, just a few seconds before BASE jumping, my heart is beating really fast.  But that proves that I’m alive. The emotions could easily take over, but instead I transform the fear into good energy and strength to make me succeed in what I have to do.

Sometimes though, I have another kind of fear, a gut feeling that tells me it’s not safe; in that case I stop and decide not to jump.  It’s important to listen to your instinct when it tells you that something can go wrong.

FtC: If you live by a motto such as “defy your limits” and you’ve pushed beyond limits most will never get close to- how do you redefine what boundaries and limits mean?

I don’t really set limits for myself other than what my instinct tells me.  I believe we are personally responsible for creating our own limits and boundaries.  If someone doesn’t want to do something, it’s usually because he tells himself that he doesn’t want to do it.  But if you convince yourself to just try, then anything can be possible.[/vc_column_text][vc_single_image image=”1545″ img_size=”full” alignment=”center”][vc_column_text]FtC: Next to your Emirates flights and Mont Blanc jump, what do you consider to be one of your most epic jumps or flights?

It’s really hard to say which one was better. To be flying in formation with Yves Rossy next to a giant Emirates A380 was a dream come true! But jumping from the top of the Mont Blanc was another dream as well.  It was pure free flying.

As a skydiver you fall like a rock but with the wingsuit you get to stay longer in the air.  Flying from the top of the Mont Blanc at 10,000m was fantastic as we had a good, long free fall and then a nice time under the canopy.

FtC: For admirers eager to take flight and follow your path, what do you recommend as the best entry into the field?

The best way to start is to go to the closest skydiving centre and do a tandem jump from an airplane.  After that, it’s all inside of you. If you really want to pursue it and you work hard, it will happen.  I believe that if you are really motivated, pretty much nothing can stop you.

FtC: As one of the pioneers of human flight, where do you hope to take it?  Any current or future projects in the works?

I don’t consider myself a pioneer of human flight.  My mentor, Yves Rossy, certainly is! He became the first man in history to fly a jet-powered wing he personally designed and engineered. I just use his machine to the best of my ability with the intention of exploring its possibilities.[/vc_column_text][vc_single_image image=”1546″ img_size=”full” alignment=”center”][vc_column_text]We have a lot of projects ahead and we just concluded one. The future goals are to reach stratospheric heights and also being completely autonomous, without any airplane or helicopter’s support to reach the right altitude for take-off. One of the dreams would be…[/vc_column_text][vc_column_text]To read the full interview and what Vince’s dream would be! With special thanks to Vince and jetman.com for granting FtC permission to share the amazing images. You can find more of them in the Jetman article in FtC’s November 2016 First Edition pages 66 – 77, digital or print. Or subscribe here!

Sasha serves as Founder and Editor in Chief of FtC.  A self proclaimed perspective seeker, adventurer, and explorer. She received her Master’s Degree in Liberal Arts and continues to study a variety of subjects within and outside of the academic setting.  Bringing a personal moonshot approach to life through FtC, aiming to provide an experience for FtC’s global community to inspire one another to stay curious, never stop exploring, and to live on-purpose and to-potential.

Pushing the Limits of Human Flight with...