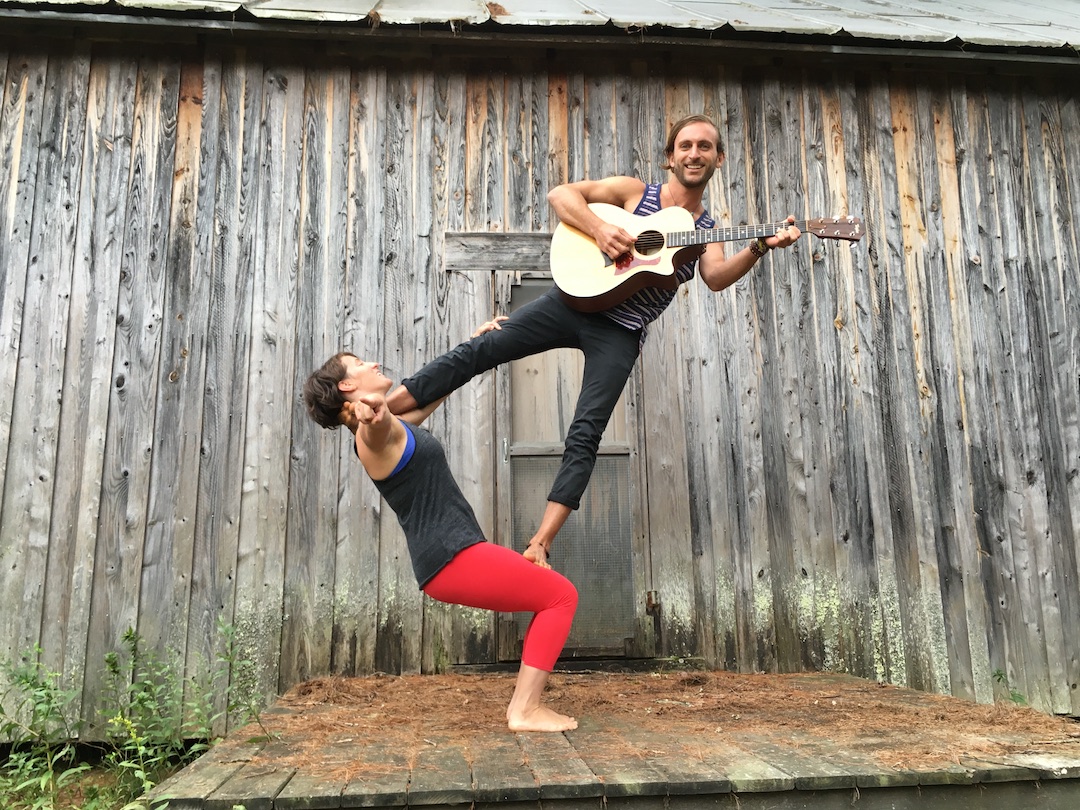 Kevin Paris imbues feel-good music that has grown into an “off the beaten path” fusion of folk-reggae-acoustic-electronic influences. In a single listen, one can hear the roots of artists like Jack Johnson, Bob Marley and Ben Harper.

As a certified yoga instructor, Paris is also leading the way for artists in the vibrant intersection of Yoga and Live Music. In this realm, he has played for over one thousand yoga classes alongside renowned teachers and fellow musicians at worldwide venues and festivals like Wanderlust, Yoga Journal Live, Hanuman Festival, Gaia and Yogaglo.

Kevin sits down with fellow yogi and musician, Woody Woodrow to discuss his influences, how to overcome perceived musical “shortcoming,” and more!

This Face the Current Music Feature is published in Issue 15.  Order PRINT here, SUBSCRIBE to digital membership for unlimited access, or continue reading this article below.

Woody Woodrow:  What was it that led you to find your voice- to start playing music and singing?

Kevin Paris:  When I would spend time at my dad’s house, he would play lullabies to us kids on his guitar. That’s probably what sparked my interest in childhood, falling asleep to the sounds of the guitar. I also remember a very distinct moment in my freshman year of high school, I never took guitar lessons or anything like that, but I went to the first tour Ben Harper and Jack Johnson did together and I remember seeing a shift in the audience after the music started playing and seeing thousands of people being so into the music and I thought, “I want to make people feel like that.” I could feel the connection between the band and the audience and it was just amazing.

WW: Is that what instilled interest in creating music that is more uplifting and soulful?

KP: That’s a good question. I think part of it was that, and part of it is also that I love uplifting and soulful music. I want to put those types of messages out into the world.

WW: What got you started on the yoga path? Was it a natural flow that you found after being in those mindful music environments, or were you always drawn to yoga?

KP: Some of the first yoga classes I ever did were when I was living in Cape Town, South Africa. I had some friends out there who were doing yoga. I tried it out of curiosity, but I also loved the idea of what it stood for and looked up to my friends who were practicing.

Sometimes when you see somebody you look up to, naturally you wonder, what are they doing? How can I get some of that? Yoga was one of those things. I tried it there and it wasn’t until I came back to the States several years later actually, that a friend of mine was doing a yoga class and the background playlist was of all my favorite artists. That was when I realized how much music was a part of the experience, both in the class and also with yoga itself. That’s when I started getting into it, and I got the idea to play music for yoga classes.

WW: I’ve been in a yoga class where you’re playing guitar and singing, it’s unbelievable- you can’t even tell that you’re playing live… it’s that good. Respect to that.

You often play music in yoga festival environments or yoga studios. Before you take the stage, do you have any rituals that you like to do? Do you have a yoga flow, singing warm-up or any other kind of exercise you can share with everyone that you use to get your body and mind in balance?

KP: It depends on how much time I have. When I don’t have much time, I will always take a few deep breaths. I feel super grounded with my eyes closed and my hands on my heart so along with my breath I like to place my hands on my chest, close my eyes and just observe. When I have more time I do the same thing, take three deep breaths, and then say a little prayer or set an intention around why I’m there. I try to remove myself a bit, and remember that I’m there to serve as the best conduit for everybody in the space and that we collectively rise and create the healing, love and connection and whatever else is needed in that space.

WW:  What does your routine look like when you’re on tour to maintain balance?

KP: Whether I’m on tour or not I’m always trying to do one physical thing a day. I just fit in these quick exercises whenever I can and if you do it just a few times throughout the day and then add up to 100; you’re in a good space. It makes you feel good instead of just sitting on the bus all day and then playing a show. Sometimes it’s for 20 minutes, and sometimes it’s for a few minutes. Right off the bus before I’m about to play I like doing wall squats or something quick. I usually try always to do ten pushups, 20 sit ups and 20 squats, which sounds like it’s not that much, but it can build consistency. Sometimes I’ll split it up if I don’t have much time.

WW: It’s wild how connected our bodies and minds are, when you do that it’s like you’re powering yourself up, dusting the cobwebs off, and getting that endorphin rush.

I want to shift into the vocal aspects of your music now because anyone that listens to your music knows that you’re a phenomenal vocalist. What would you tell someone who’s looking to get into singing or maybe is not comfortable with their voice? How can you work through those mental barriers and take steps to become confident?

KP: First I would say, “I feel you.” It’s overwhelming and common for us to have this hesitation because we can become so discouraged by even one person saying something to us like, “You’re tone deaf” or “You can’t sing.”

My advice would be to start small. I started out playing with a small group of friends who I felt safe and comfortable enough with, and I was always getting positive feedback from them. Most of the time people are positive no matter what you sound like because to hear and see you try something new is exciting.

Know that your voice as a singer is like any tool, like any instrument; it’s going to take time to be happy with your results. I don’t like how my voice sounds on my first two or three albums because it changes and I’ve done a lot of work on it. It’s an instrument that is constantly growing, so go for it, start there. Work on your vocals.

WW: If you could go back and speak with your high school self, what would you tell him?

KP: Thank you for asking me that, because I wish I could have learned from other people who had been asked that question! This answer does not apply to everyone, but I genuinely wish that I had been told by more people that, if you work hard and you’re a loving, kind person and super dedicated and passionate about learning the skills you need for your future job, then you can do whatever you want. You don’t always need to go to college and get a degree to do the job that you want. As long as you have a good work ethic and the tools to work hard, and you don’t want a job that requires an academic degree, then I don’t think it’s necessary. And be nice. Be the nicest person ever, and you’ll be successful.

WW:  What do you suggest for anyone looking to get into or enhance his or her meditation, mindfulness, yoga, or any truth-seeking, spiritual practice that might seem outside him or her?

KP: There are a few different facets of this question, but first of all, and this is life-advice, sometimes we just need to be thrown in the mix, no matter what it is that we want to try or expand on. Most people who are where they are and that we look up to, for example, someone doing handstands in yoga class or a professional musician or whoever, didn’t know what they were doing when they first started. Part of it is just diving in and not letting fear dictate whether you do something or not- or whether you take it to that next level. If it’s your first time or you are pushing yourself out of your comfort zone where you might feel self-conscious or vulnerable, my next piece of advice would be to try it in the privacy of your own home. Nowadays it’s easier than ever; you have a lot of different resources on the internet. YouTube has lots of great yoga channels, for example, that you can try in your own house.

KP: Yeah, no excuses. I would say also, with yoga, if you want an active, powerful practice, try out some hot yoga or power yoga classes. If you’re looking for deeper stretching or you feel anxious and just need to slow down, something like yin yoga or restorative yoga are great to try. The same thing with meditation, there are so many different types of meditation. Some are guided, some are not, you can start on YouTube, or with your local teachers.

WW:  You’ve got some great things in the works and just put out a new song called “Be Alright,” -and it’s awesome! It’s a great tune to listen to during a yoga practice or meditation.  Where can people go to check this new track out and see what else you’ve got lined up?

KP: They can check it all out on my website, Spotify, and iTunes- as well as my social media.

WW: I appreciate you sharing your inspiration.

Woody Woodrow is an internationally touring musician, yoga instructor, and a daily meditator. He helped found his heavy rock band “Our Last Night” over a decade ago and now travels around the globe sharing Yoga and Meditation before his shows. He loves connecting and supporting others to live their dreams and become the rockstars of their own life. You can find him on his blog each week on his website.