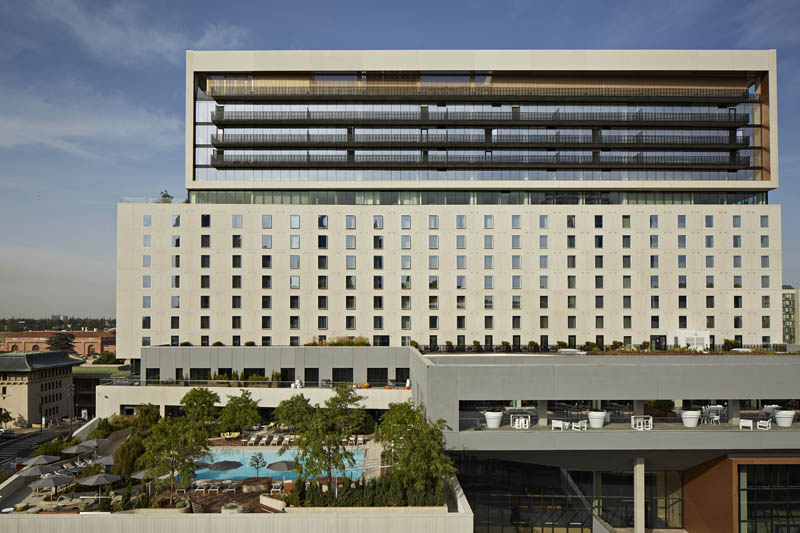 Known as America’s Farm-to-Fork Capital, Sacramento, California is located amid smaller, family-owned farms, ranches and vineyards—producing everything from rice to wine grapes all year-round in the ideal Mediterranean climate. In 2012 Sacramento sought to promote this abundance by adopting the Farm-to-Fork Capital designation and the renaissance was afoot! Since then Sacramento has been changing before our eyes. Nowhere is this change embraced more readily than by the Kimpton Sawyer Hotel, where the areas agricultural heritage is combined with a vibrant cultural presence making it a key contributor in the rebirth of the city. 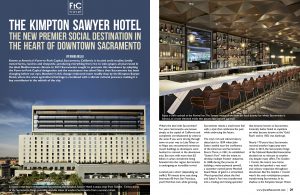 A Face the Current Travel Feature, published in Winter 2019 issue. Read in PRINT here, or continue reading this article below.

What’s the deal with Sacramento?

For years, Sacramento was known simply as the capital of California and completely overshadowed by cities to the west. If you were driving through town on your way to Lake Tahoe or to Napa you encountered numerous vacant buildings as developers were hesitant to reinvest in the downtown area. But now, with more than $3 billion in urban investment being funneled into the region, Sacramento is undergoing an incredible revival.

Located just a short (depending on traffic!) 90 minute drive east along Interstate 80 from San Francisco, you’ll find that even while growing, Sacramento retains a small town feel with a style that celebrates the past while embracing the future.

The city’s rich and vibrant history dates back to 1839 when John Sutter settled near the confluence of the American and Sacramento Rivers. There, in 1841, he established “Sutter’s Fort” with the intent to develop multiple frontier industries. In 1848, during the process of building a water-powered sawmill, a carpenter named James Marshall found flakes of gold in a streambed. Word spread fast about the find and Sutter’s Fort was transformed into a trading and mining epicenter that became known as Sacramento. Ironically Sutter failed to capitalize on what became known as the ‘Gold Rush’ and by 1852 was bankrupt.

Nearly 170 years later, Sacramento received another huge jump-start when in 2015, the Sacramento Kings of the National Basketball Association decided not to relocate to another city despite many offers. The Golden 1 Center, the team’s new home was built and sparked a vast retail and culinary expansion throughout downtown. But the Golden 1 Center wasn’t the only revitalization project transforming Sacramento. In its shadow is the Kimpton Sawyer Hotel. 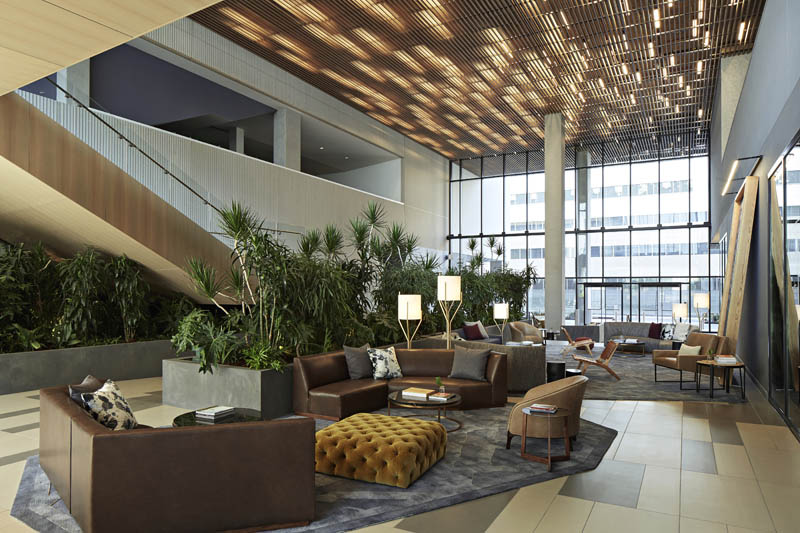 The lobby serves as the heartbeat of the hotel. As guests enter, they’ll immediately discover Sacramento’s rich gold rush era history with gold accents featured throughout the property.

The Sawyer is Galvanizing the Revival

The Sawyer is part of Downtown Commons (DoCo) which is the cornerstone of downtown Sacramento’s revitalization. With the Golden 1 Center and DoCo just steps away, visitors and locals now have “one stop shopping” where they can stay the night, have multiple retail and restaurant options and attend a Kings game or concert.

There is no better place to take in the beautiful city views while enjoying delicious food and handcrafted drinks,” chimes Gavin Hamano, the Sawyer’s director of sales and marketing. “We are excited to be located in the heart of the city and a key contributor to its rebirth.”

The Sawyer, which opened its doors in October 2017, is a boutique hotel, creating the ambiance of being a personal guest in a private home, rather than just a hotel occupant. Located on the top floor you’ll find the Residences at the Sawyer consisting of 45 contemporary urban homes offering amenity-rich, full-service living within steps of the city’s flourishing features. The hotel lobby serves as the heartbeat of the hotel as the 30-foot floor to ceiling windows bring the outside in. Guests are encouraged to interact here during many of the hotel’s community activities such as the evening’s wine hour. 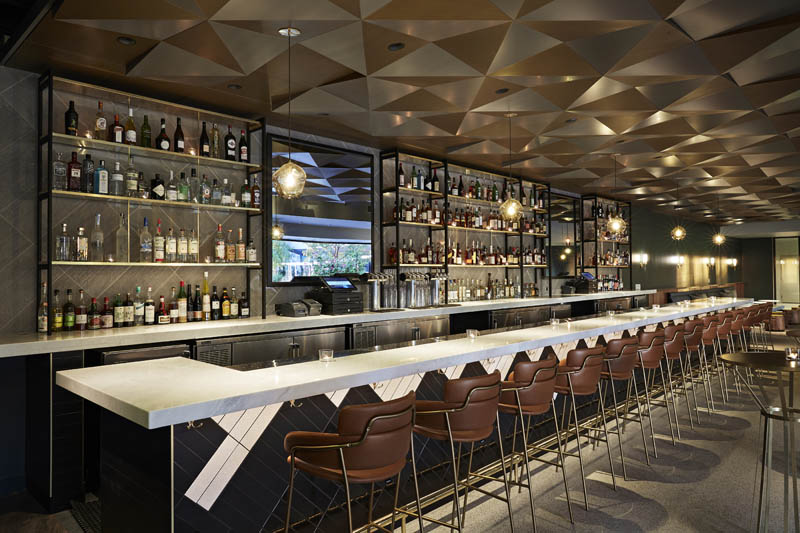 Enjoy a craft cocktail at the Revival bar. The Sawyer menus draw from the local bounty for which Sacramento is famous, to create elevated meals that guests approve and applaud.

This is where the Sawyer excels and has even managed to shorten the farm-to-fork path. Executive Chef Patrick Prager at Revival at the Sawyer, one of the hotels two main restaurants, says, “We have an abundant herb garden on the 5th floor of their hotel where we source many of our herbs.” He excitedly adds, “Next year we will even be growing vegetables for use in the kitchen!” 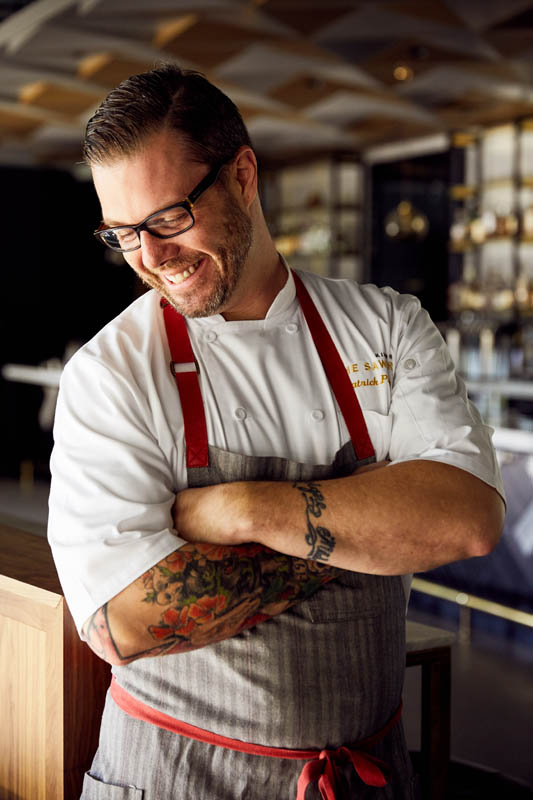 Patrick Prager, Executive Chef at the Sawyer, frequents farmer’s markets and likes to buy local ingredients that he can use to create dishes with the farm to fork philosophy. “We stay true to that philosophy and manage the line daily to ensure consistency.”

But it doesn’t stop there. The hotel’s culinary program also supports local farms in the greater Sacramento area where Chef Prager has developed personal relationships with Passmore Ranch, an aqua farm in the area where they have sturgeon, trout, steelhead, as well as caviar; Watanabe Farms with everything from micro greens to figs and peaches; and Riverdog and Del Rio Farms which both concentrate on vegetables, to name a few. Prager values the importance of supporting and buying from these local farms because he believes, “it’s the small local outlets who make the farm-to-fork movement possible.” 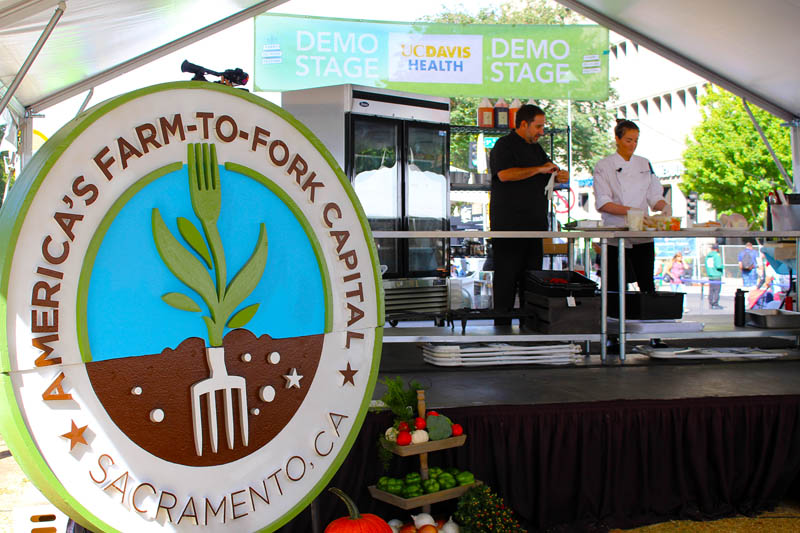 Designed to showcase where their food and drink comes from, Sacramento’s Farm-to-Fork Festival has grown to be one of California’s most-anticipated food events.

The entire region celebrates this effort with Visit Sacramento’s annual Farm-to-Fork Festival which is quickly becoming one of the most anticipated food events in the country attracting more than 80,000 people this year. Designed to showcase regional food and drink, the event is hosted on Sacramento’s iconic Capitol Mall. This admission-free festival boasts more than 80 vendors highlighting local food, beer and wine, along with exhibits from farms, ranches and other food and agricultural retailers. 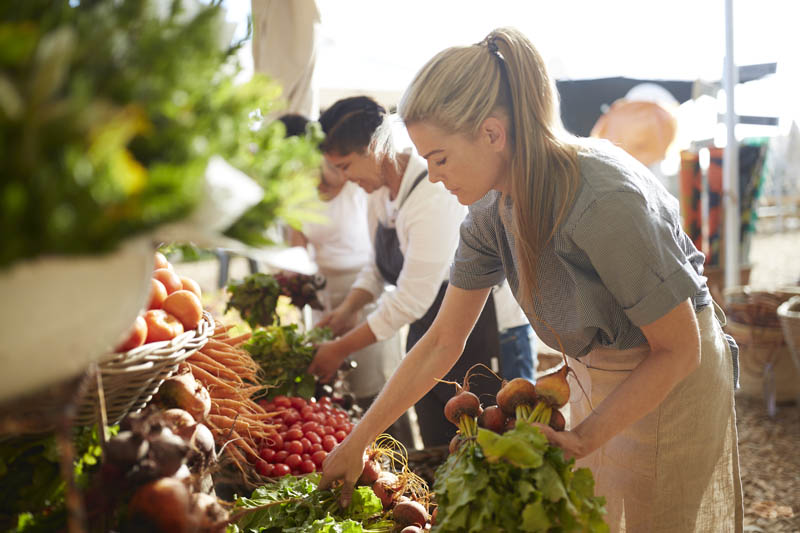 The month-long Farm-to-Fork celebration culminates on the city’s famed Tower Bridge when 800 diners enjoy a one-of-a-kind culinary experience created by the region’s top farmers and chefs. Now in its sixth-year, Visit Sacramento’s Tower Bridge dinner has truly become one of Sacramento’s most sought-after tickets.

The 2018 version of the dinner was led by famed Chef Jeremiah Tower. Recognized by Martha Stewart as “a father of American cuisine.” Chef Tower is renowned for leading the kitchen at Alice Waters’ Chez Panisse in Berkeley, where the insistence on fresh and local ingredients quickly gained notoriety.

The Sawyer is always thrilled to be involved with such an incredible event like the Farm-to-Fork Festival,” explains Chef Prager. “This year we took part in the Legends of Wine event highlighting local wineries and The Tower Bridge event where we featured an appetizer and expedited the actual dinner. I’m really excited to say, we will soon also be involved in the Sacramento Hotel Association Farm-to-Fork Chef challenge.”

It’s Not Just About the Food!

Because the city enjoys a Mediterranean climate, distinguished by warm, wet winters under prevailing westerly winds and calm, hot, dry summers, residents and visitors can spend a lot of time walking and biking the nearby American River Bike Trail, hiking, whitewater rafting, kayaking, and just enjoying afternoons year-round under the incredible amount of shady trees. 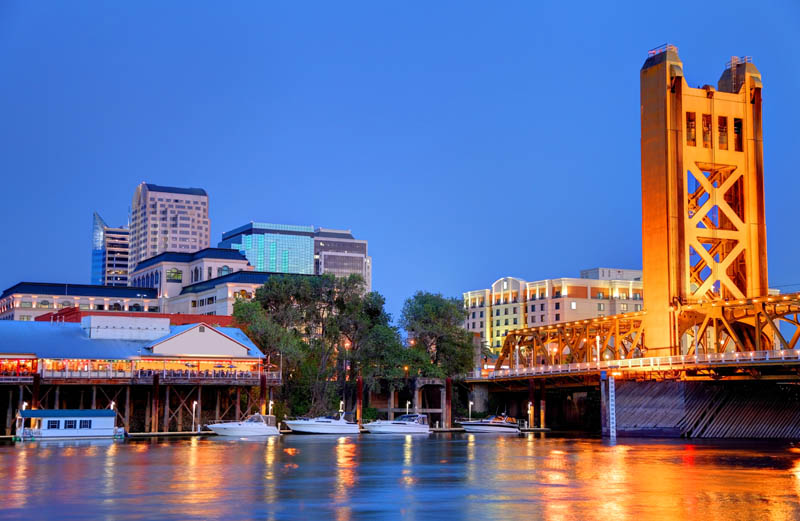 The Mediterranean-style climate of the city gives farmers the ability to farm year-round and provides us with nearly 50 farmers markets,” reveals Hamano. “But we want guests to relax at the Sawyer. Here guests will find yoga mats in all the guestrooms with a 24-hour dedicated yoga/fitness channel, morning coffee/tea service, hosted evening wine hour, pet acceptance with no additional charges, and the only rooftop pool in Sacramento—a one-of-a-kind pool deck overlooking Golden 1 Center—which has become one of the hottest places to be seen in the city. In addition, we want to ensure all of our guests know they can take advantage of our public bikes. Sacramento is a great biking city with miles of bike paths and a great riverwalk.” 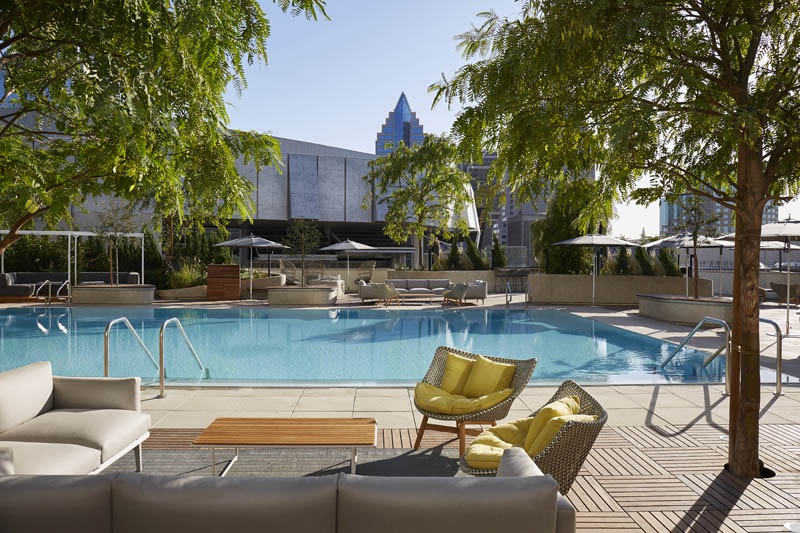 A Proud History and Future

Sacramento can look back on a proud, colorful history. But the word is getting out about the new Sacramento, a recharged city whose pioneering spirit is driving its growth in both technology and culture. The Sawyer is proud to be part of this rediscovered, vibrant energy.

Whether you’re traveling for business or pleasure, you’ll find this contemporary boutique hotel the perfect base for exploring all that a burgeoning Sacramento has to offer.

↠ The original city is actually underground. Due to floods in 1862, citizens worked to pave the city by raising the streets (literally). This ended up creating underground spaces and walkways that are more than nine feet below ground. These days, underground tours, put on by the Sacramento History Museum, take visitors down into the tunnels to share stories about the businesses and lives that thrived below their feet.

↠ The transformation of Sacramento has attracted youth and millennials. In fact the Greater Sacramento region is younger than the regions of Seattle, Portland, San Jose, and San Francisco.

↠ Sacramento remains relatively affordable. The median square foot price of a Sacramento-area home is $228, compared with $531 in the Bay Area. Accordingly, the US Census Bureau reports nearly 20,000 people each year relocate from the Bay Area to the Greater Sacramento Region.

↠ Sacramento is considered an environmentally friendly city. The Sacramento Municipal Utility District is working on a long-term plan to cut greenhouse gas emissions. SMUD is known for its renewable energy programs and energy efficiency. By 2030 the city has a goal of obtaining 37 percent of its energy from alternative resources that include biomass, wind, and solar power.

↠ Sacramento was where Mark Twain was hired as a special news correspondent with the now-defunct Sacramento Union newspaper in 1866, reporting on the city during its old west days.

↠ Sacramento has some unique nicknames, including “The Camella Capital of the World,” “The Big Tomato,” and “City of Trees.” Sacramento is second only to Paris, France, in number of trees per capita in the world.

Foz do Arelho: An Aerial Tour of...

Colors of the World: Capturing Vibrancy with...