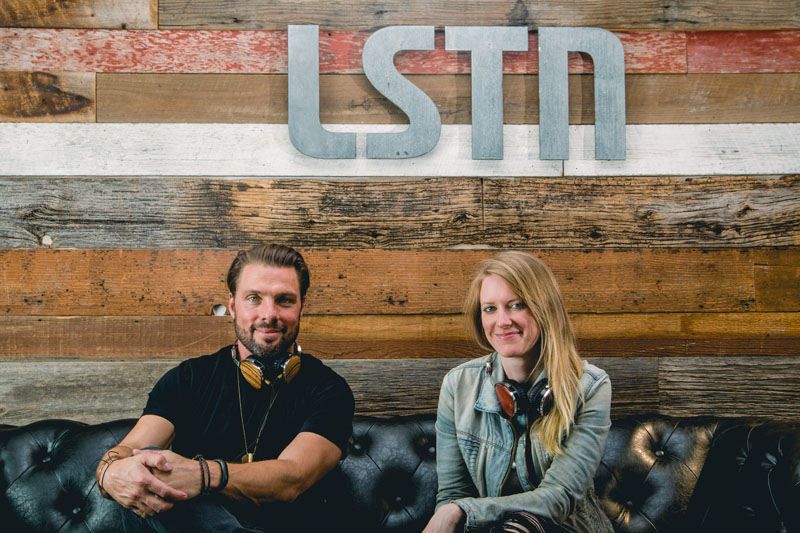 Created in the spring of 2013, LSTN Sound Co. was formed to be an inspirational audio brand. After witnessing a woman hear her own voice for the very first time thanks to hearing aid technology, LSTN co-founders Bridget Hilton and Joe Huff decided to focus their energy and passion on creating change through the power of sound and music. Since that revelatory day, LSTN has helped more than 30,000 people receive hearing aids through their charity partner, Starkey Hearing Foundation.

This Face the Current Music Feature is published in Issue 26 Nov/Dec 2019 Edition.  Order PRINT here, SUBSCRIBE to digital membership for unlimited access, or continue reading this article below.

Bill Austin, founder of Starkey Hearing Foundation lives by the motto, “Alone we can’t do much. Together we can change the world.” Even as a young man, Austin knew that his calling in life would be to help people hear and by achieving that, he could have a lasting and meaningful impact on the world. For more than fifty years, Austin has been providing the gift of hearing to people in need and Starkey Hearing Foundation was officially founded in 1984. The organization was built around his vision, “So the World May Hear”, with the purpose of bestowing the amazing gift of hearing to those in need, thus empowering them to achieve their potential. In 2010, Starkey Hearing Foundation committed to Clinton Global Initiative that they would provide one million hearing aids over the course of this decade.

It was that outlook and optimism that drew LSTN to proudly partner with Starkey Hearing Foundation on what would become a shared mission of global hearing awareness. Over the past three decades, Austin has expanded the foundation’s reach from Minnesota across the United States and around the world. With the much appreciated and humbling help of thousands of volunteers and supporters, Starkey Hearing Foundation has become the embodiment of Austin’s incredible vision and has provided more than 1.9 million hearing aids and much-needed care to people in more than 100 countries. Some of LSTN’s past trips to deliver hearing aids have included journeys to Toluca and Tlaxcala, Mexico; Arequipa, Peru; Eldoret and Kisumu, Kenya; Kunming, China; Santiago and Santa Domingo, Dominican Republic; Gulu and Kampala, Uganda; Phoenix, United States; Colombo, Sri Lanka; Piura and Chiclayo, Peru; Kigali, Rwanda; Kibera, Kenya; and Jakarta, Indonesia.

August 2013 saw LSTN’s first trip with Starkey Hearing Foundation to Peru. The youngest patient fitted with hearing aids was three years old, while the oldest was 108. For this woman, the moment was considerably meaningful not only to herself, but to her entire family, and it proved to all those involved that there truly is no age limit to receiving the gift of sound.

In Gulu, Uganda, LSTN was honored to work with Sister Rosemary Nyirumbe, one of Time Magazine’s “100 Most Influential People in the world.” The hearing-aid fitting took place at St. Mary’s School which Sister Rosemary founded. She has since tirelessly worked there since 2001 and has taken in more than 2000 young women to help improve the lives of those affected by Joseph Kony’s Lord’s Resistance Army. “It’s such an honor to help families reconnect with their communities and each other; I can’t imagine anything else I’d rather be doing,” Hilton confesses.

Kibera, Nairobi is the largest slum in Africa and the second largest in the world. With most residents lacking basic needs like running water, electricity, and proper sanitation, it’s no wonder the life expectancy is around thirty years of age. LSTN and Starkey Hearing Foundation were able to help nearly 2,500 patients in Kibera, bringing hearing technology to those who would otherwise never have access to such life-changing equipment.

In the incredibly diverse Yunnan Province of China, home to more than fifty-six ethnic minorities, one father traveled from his mountain village home where he worked as a sheepherder to bring his ten-year-old daughter to receive hearing aids. Born with hearing loss, and due to the limited resources available to her in her community, her school was unable to accommodate her needs. Because of this, she never attended school yet still managed to teach herself to write her name and read lips. Her hearing aids expanded her opportunities and changed her life. LSTN’s main goal has always been to introduce the highest quality of sound to as many people as possible by combining premium materials, custom-tuned sound curves, and unique drivers in every product. From zebra wood and walnut headphones with vegan leather ear pads, to a selection of cordless and corded Bluetooth ear buds, to sleek and portable Bluetooth speakers, to volume-limiting headphones for kids, and premium accessories and trendy merchandise, LSTN offers something for everyone.

Customers receive beautiful, high-quality products, and proceeds from every purchase help fund LSTN and Starkey Hearing Foundation’s mission to supply hearing aids around the world. By hearing sounds and music, previously hearing-impaired people are able to reconnect with their communities. “Playing music for kids who have never heard before is one of our favorite things about what we do,” LSTN proudly notes.

With all the air-travel required to spread the gift of hearing around the world, Delta Air Lines was the natural choice for a partner and supporter of LSTN’s mission. LSTN is now the in-flight headphone partner for Delta Air Lines, supplying Delta One’s transcontinental flights between JFK and LAX/SFO, DCA-LAX, and BOS-SFO, as well as Delta Premium select customers, with a pair of LSTN headphones for their flight. These headphones are specifically designed to optimize the in-flight experience, with a noise-canceling feature to allow customers to better experience Delta Studio, the airline’s industry-leading, free in-flight entertainment system.

As if that isn’t enough, 100% of the proceeds from LSTN’s partnership with Delta Air Lines will benefit the Starkey Hearing Foundation. As Tim Mapes, Senior Vice President and Chief Marketing Officer of Delta Air Lines notes, “Our partnership with LSTN directly aligns with Delta’s commitment to give back to local communities while making thoughtful enhancements to the on-board experience for our customers.” Appropriately, the partnership’s motto is, “Good for business. Good for the world.”

“If you think you are too small to make a difference, try sleeping with a mosquito,” said the Dalai Lama. It’s that very mindset that LSTN embraces and is taking into the future.

Thanks to the amazing support of their customers and partners, LSTN has and will continue to travel the world giving the gift of hearing to those who need it most. As LSTN exemplifies, philanthropy doesn’t have to be large and flashy—it can be many small efforts making the world of difference.

Now that’s a life-lesson we all need to hear.

LSTN Sound Co Is Enhancing Lives Through the ‘Gift’ of Sound and Music was last modified: March 15th, 2020 by Ainsley Schoppel

Discover Paradise, Made of Ice – Sweden’s...

Best Places To Visit: Through the Lens...