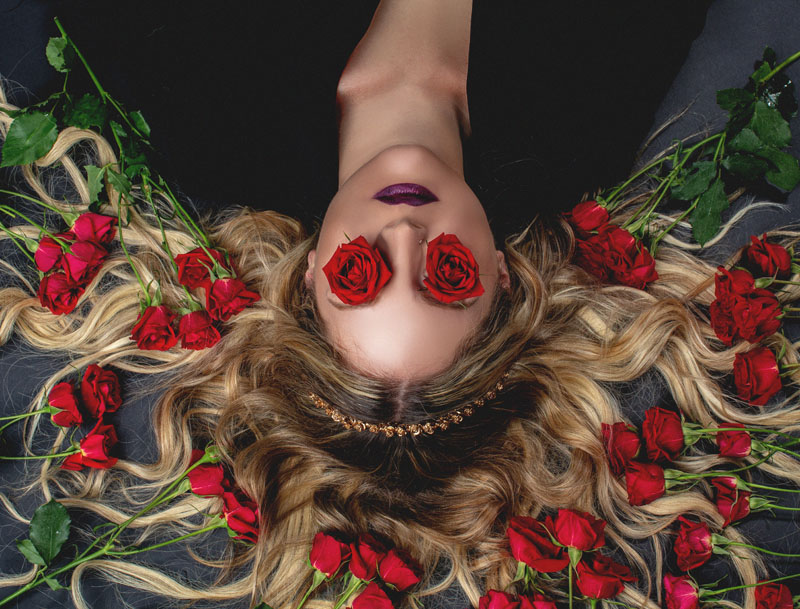 After leaving college to focus on her musical journey, ROZES wrote and featured on Just a Gent’s “Limelight”, which reached the top spot on Hype Machine and currently has over five million plays with the remix hitting sixteen million on SoundCloud.

This Face the Current Music Feature is published in Issue 31. Order PRINT here, SUBSCRIBE to digital edition for unlimited access, or continue reading this article below.

Building on the momentum of her successful song writing ventures, ROZES teamed up with Andrew Taggart, one half of The Chainsmokers, to write and feature on the group’s song “Roses”. Released in June of 2015, the single peaked at the sixth spot on the Billboard Hot 100 and claimed the top spot on Billboard’s Hot Dance/Electronic Songs chart in January of the following year.

The following month, ROZES released her EP, Burn Wild, and quickly penned a record deal with Photo Finish Records where she released “Where Would We Be” with Nicky Romero, “Canyons” and “Famous”. She also featured on Galantis’ track “Girls on Boys”, Louis Futon’s “Wasted on You”, Cash Cash’s “Matches”, and Cheat Codes’ “Sober”.

As ROZES’ industry momentum was gaining traction, she received an invitation to attend Alicia Keys’ camp, She Is The Music (SITM). SITM is a non-profit organization that is seeking to increase the number of women working in music, including songwriters, engineers, producers, artists, and industry professionals. For ROZES, the camp was lifechanging.

“I feel like my ten-year-old self is freaking out that I met Alicia Keys,” she said. “The camp was a very defining moment for me. I saw how raw and secure she is in herself. The experience made me pivot. I relaxed, held on to what I’m doing, and took a step on my new path.”

In fact, while at the camp, ROZES wrote “Call Me”, a thought-provoking song about raising awareness and support for those struggling with mental health issues. “I’ve always been somebody who struggled with my mental health,” she divulged. “The lyrics discuss somebody laying in bed all day, going through depression and dealing with anxiety. I recognize those emotions, because I’ve been there, too.” ROZES uses the song to detail everything she’s experienced. “I’ve stared blankly out of a window. I’ve gotten lost in my own mind and been trapped in my own thoughts,” she admitted. “I try to be the voice for the people who need it. Opening up has helped me the most. I encourage fans to do the same. You can turn to friends, journaling, poetry, or reading. I turn to song writing.” Last year, ROZES released “Halfway There”, a powerful track that became the official anthem of the 2019 Women’s March on NYC as part of The Women’s March Alliance.

The emotional song initially found a spot in the heart of her sister-in-law after a cancer diagnosis, and a diverse group of women supported the song by appearing in the music video including ROZES’ mom, aunt, grandma, and best friend.

In writing “Halfway There”, ROZES realized that a more natural approach to song writing and performing was a welcome change. “I just need to sing and feel music,” she exclaims. “Organic creation is what I embrace as an artist. Over the past year, I’ve matured the most in my life. I’m actively an adult now. My songs had to embody the change. I’m the type of person who needs to go through phases. However, I always wanted to get to back to the way I started—sitting at the piano and writing.”

ROZES has shared those changes with national audiences on Good Morning America, The Tonight Show with Jimmy Fallon, The Late Late Show with James Corden, and CONAN. She has also appeared in TIME, Pitchfork, MTV, Marie Claire, Paste, Entertainment Weekly, Paper, and Bustle, and has performed at Coachella and Ultra Music Festival.

Her latest single and EP, jointly titled “Crazy”, were released this August, and as ROZES explains,

“I decided to name this EP Crazy because when these songs are all tied together, the listener really gets to see how back and forth my mind can be. One moment I am encouraging and uplifting, and other moments I’m self-conscious and nervous.”

ROZES notes that women who are open with their emotions tend to be labeled as crazy: “I can only assume some of my past loves have labeled me this way. But if the way that I love is ‘crazy’, ‘Say I’m crazy now, if that’s what love’s about.’”

In specifically speaking about “Crazy”, ROZES confessed that it is a song that leaves her very vulnerable. “I wanted to write something that portrayed how impulsive and erratic my love tends to be; how I can see everything disappearing and falling into place simultaneously. I’ve always thought that the way I love is ‘crazy’ but have always chosen to feel over hiding my true emotions. As an artist and writer, I have always been drawn to such intense relationships and have always latched onto a love that tends to be unpredictable but what others might refer to as unstable.”

The raw and extremely relatable nature of ROZES’ lyrics and performances have an inspirational impact on her listeners.

“I’m finally who I’m supposed to be,” she concludes. “I feel more independent that I ever have. I’m stronger. I’m ready to really fight for what I believe in. I’m not afraid. I hope I can inspire others like I was inspired in the past year. If I can give you just a little bit of hope, that’s all I want. Music made me realize I could sit at a piano and use my voice for good. So, that’s what I’m going to do.”