From Juilliard to League of Legends: Mako Making His Mark 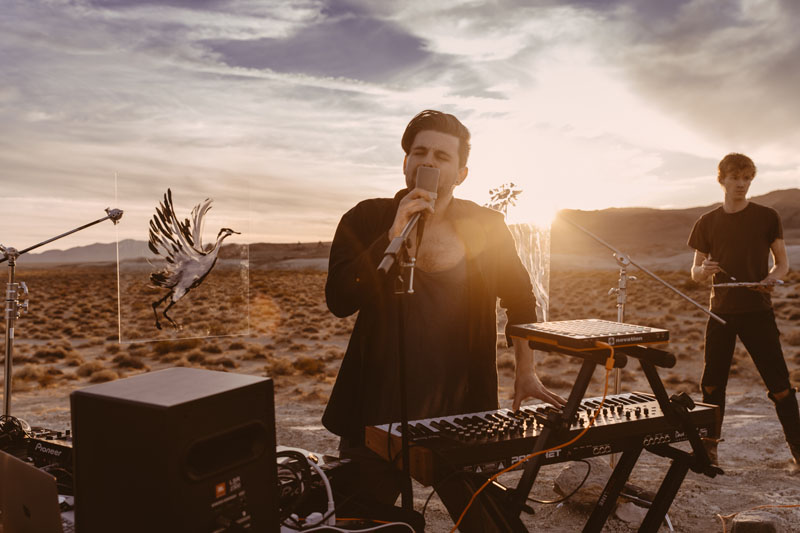 Alex Seaver, professionally known as Mako, is a critically-acclaimed producer, songwriter, and musician. Mako has worked alongside some of the most talented people in the industry, including Lindsey Sterling and Illenium. His recent collaboration with Sterling, “Lose You Now”, has amassed over three million views on YouTube in just three months. Other projects of Mako’s include “Rise” and “Legends Never Die”, two worlds anthems for League of Legends—one of the most popular multiplayer online battle games in the world. Together, these songs have been played over 245 million times on Spotify alone.

Before he was Mako, Seaver dived head first into music at a young age. He worked hard to earn a full scholarship to The Juilliard School. Although he didn’t necessarily expect a career in the music industry, Seaver has always had an intimate love for and connection to the art of sound. His creativity, intelligence, and musical background blend together in an impressive body of work.

Due to the pandemic, Mako has been confined to the studio since his last concert in September of 2019. In a delightful conversation that saw him share his experiences and creation process, Face the Current caught up with Seaver to learn more about the man behind the music.

Ty Johnson: You recently shared your highly anticipated Fable Remix LP on all platforms. The album does a great job of highlighting a wide variety of electronic talent. It also showcases your versatility and skill as a musician. What is your favorite part of releasing this project with so many featured artists?

Alex Seaver: After all these years of producing, I still get so happy hearing other artists remix my material. You sort of get lost inside of your own music (so much time spent tinkering and sculpting and figuring out what you want the piece to feel like), and it’s just so damn fun to have all of that turned upside down immediately when somebody else interprets your material in their own voice. I don’t think I’ll ever not enjoy that.

TJ: League of Legends and Riot Games have enlisted you to co-write and co-produce many of their top songs to date, and you have worked on songs for video games and TV series. How is writing a song for a designed purpose different from solely writing for self-expression or your fans?

AS: This is a really great question. It deserves a long answer, but I’ll try my best not to bore people. I tend to put these two types of pieces into completely different buckets. Music in service of a larger goal or for a specific client, and music as a form of self expression. I find that I deeply dig bouncing between these two buckets; they both can be supremely challenging, and generally, always for very different reasons. When I’m hired to write music for something, the initial challenge is diving deep into the head of the person hiring me. What do they want? What do they think they want? When they say they want something “upbeat”, how do you figure out which drums to reach for or which styles and influences to call on?

There’s an enormous amount of trust that you build; you have to stay incredibly humble and dedicated to understand their vision—building those boundaries firmly for yourself to play in. Conversely, sometimes that blank page of a Mako track can be pretty scary. I don’t always feel like I have stories to tell when I sit down to write. Searching for words that I want to say can lead me towards some of the more rare bouts of writer’s block that I might encounter. There I go rambling, but I think a lot about this stuff and I really enjoy the challenges.

TJ: Your rich and complex musical background includes graduating from The Juilliard School after receiving a full scholarship as a musician. When did you first fall in love with music or think about becoming a musician?

AS: I sort of remember sixth-ninth grade being a really special fog of learning the trumpet and french horn. Being naturally good at both of them, I was enjoying the hell out of myself. It wasn’t until high school that things got a little more serious. I started to fall head over heels into classical music, specifically. It’s almost psychotic to think about it now, but I never even had the flicker of a thought like, “Is a career as a professional french horn player even the life you want for yourself?” I just kinda dove deep without asking too many questions.

"Pursuing a career as risky & competitive as music requires a really healthy dose of dreamy naïveté. If you ask too many questions, you can really freak yourself out. It requires a full-blown “plunge” to work." -@itsmako Click To Tweet

TJ: You have an amazing voice alongside production expertise and incredible instrumentation. With so many unique assets and talents, you are sure to have much continued success. What can you tell us about your plans for the future?

AS: Aw, thank you! I’ve been doing a lot of thinking during COVID about my career ahead. Including what sort of goals I have and where I’d like to be ten years from now etc. It’s honestly still pretty fuzzy for me—I can often get pretty stressed about feeling like I’m trying to juggle three completely independent career paths in music at the same time, all of which deserve my complete focus and attention.

I feel really lucky that I branched out wide enough to be pulled in several directions: as a songwriter, a film composer, and an artist. For the time being, I’m just sort of keeping myself honest by only taking on projects that feel sincerely inspiring to me, and just trusting that the rest will figure itself out. I didn’t really get to where I’m currently at with a ton of foresight (I never expected to be doing the things I’m doing now), but I’m really happy! So, I feel like I won’t tinker with that process.

TJ: Illenium and Lindsey Sterling are some of the people with whom you have collaborated. How do you decide who to team up with and what is it like to work with such talented and acclaimed musicians?

"It's fun to be w/ world-class artists & chop it up about music. Nobody I’ve ever worked w/ feels 'bigger than the room'. It's just hardworking folks that love making music & want great ideas to come to life." -@itsmako Click To Tweet

It’s not like all these fabulous people are knocking on my door or anything (haha), so it definitely doesn’t feel like, “I’m deciding to work with ‘xyz’.” It’s just exciting to get the opportunity to link up with these people. However, I do have some artists in mind that I’d kill to work with, so I think in the years to come I might get a little more proactive about reaching out—we’ll see.

TJ: “Lose You Now” is a recent collaboration with Lindsey Sterling that combines classical music with modern technology and style in a beautiful and powerful way.  This song touches the listener in a deep and profound sense through the emotions of love and loss. What is it like to use your music as a tool to connect with people on such meaningful subjects?

AS: It’s probably the greatest experience I feel like I get to have in this career. Not all music is meant to be especially profound, deep or important. But sometimes a story like Lindsey’s is told to you and you get to throw yourself deep into it because of how compelled and inspired you are by it. I think all artists get DMs like these, when fans have the courage to open up and share the impact that music has had on them; to share stories from their life.  It’s really healing and intimate, and one of the most cherished aspects of doing this stuff.

TJ: Your music consists of many different styles and genres. Is there a particular type of song you that you most enjoy creating?

AS: That’s a pretty fun question! Sometimes I’m kind of quick to respond that the quicker ones are more fun. Just because they don’t terrorize me so much. But, I have a really visceral memory of “Coyote” and “Parable” off my latest album being such demanding and all-encompassing experiences, and I actually got a little depressed after finishing them. I realized I wouldn’t get to wake up anymore and explore all the sounds inside of them, push them around, and breathe them to life. I also deeply enjoyed making my first two worlds anthems at League of Legends (“Rise” and “Legends Never Die”), because of the people I got to work with and the insanity of working on a project heard by so many people.

TJ: Your real name is Alex Seaver, but professionally you are known as Mako. What is the story or inspiration behind your stage name?

AS: Logan, my old partner in Mako, came up with it! It’s from Final Fantasy: his favorite video game.

TJ: In order to accomplish all that you do, you must have an extremely busy schedule.  Is there anything that you do in your routine to help remain balanced and healthy?

AS: This is the million-dollar question (haha). I’m not very good at this. Exercise usually comes into play when I’m tracking my mental health. I’ve learned that I really like taking adventurous international trips. I’m pretty shelled up since we’ve been shut down this past year, though. I love partying, but it’s the same as travel—not so much going on right now.  Usually anything that can yank me out of the studio is a net positive to keep fresh and happy.

From Juilliard to League of Legends: Mako Making His Mark was last modified: March 30th, 2022 by Ty Johnson