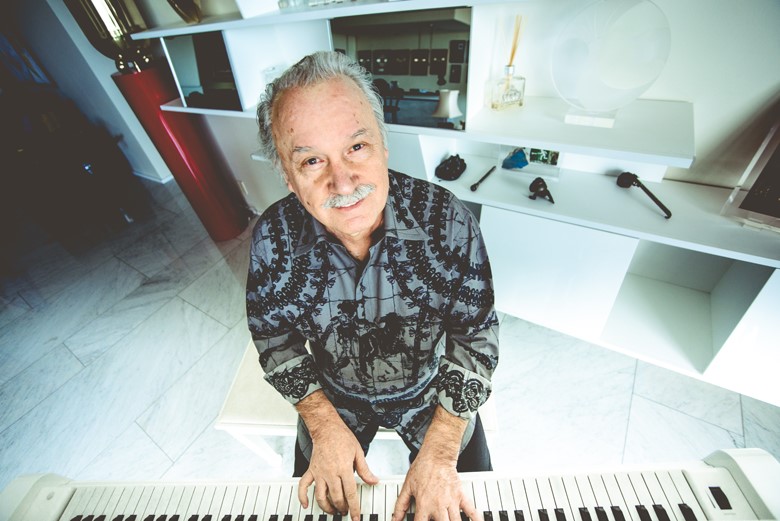 [vc_row][vc_column][vc_column_text]Memories & Dreams: Giorgio Moroder- Father of Modern Music Giorgio Moroder began his music career in Munich, as a humble bass player. During the early 1970’s he met and collaborated with Donna Summers, whose career had not yet taken off behind the microphone at that point. After the two released “Love to Love You Baby” and “I Feel Love” his previously unimagined synthesized twists on the classic sounds of the time, left the world in a craze of Disco Fever… changing the course of music forever. Giorgio’s incredible abilities caught  the attention of Director Alan Parker, who requested that Moroder create the soundtrack for “Midnight Express.” Many other classic scores followed for iconic blockbusters such as Metropolis, Flashdance, Scarface, Top Gun and The Never Ending Story. Moroder went on to collaborate with some of the world’s greatest artists, including Barbra Streisand, Cher, Elton John, Janet Jackson, David Bowie, Freddy Mercury and Chaka Khan and Moroder collected an impressive array of 3 Academy Awards, 4 Golden Globes, 4 Grammys and more than 100 golden and platinum records to look back on.

But this man never looks back, with his incorrigible energy and openness, having by this time written songs for 3 Olympics events, Giorgio reappeared with the same charismatic attitude in 2013, hypnotizing the world with his intimate vocal tribute to his love of and dedication to music, in “Giorgio by Moroder” on Daft Punk’s Random Access album.  Giorgio decided to continue with a festival tour; playing Wireless Festival, Pasha Ibiza and Vivid Festival amongst others. He followed that by getting straight into more collaborations with a younger generation of producers and artists, working with Britney Spears, Kylie Minogue, Matthew Koma, Sia, Charlie XCX and more, on his new album Déjà vu, released by Sony/RCA in 2015. It was really no surprise when the album shot to No.1. in America on the EDM charts, yet again highlighting his innate genius and ability to adapt timelessly to all genres. Giorgio Moroder talks to FtC about his memories and visions…and the secret to his creativity….

FtC: Without even realizing it at the time, you became the voice and message of hope and inspiration for many via Giorgio by Moroder (Random Access Memories). If you were to consciously choose another message of hope to send out to today’s society in general, what would it be?

Giorgio: You can do so much, you have unlimited knowledge at your fingertips, the power to use your voice to reach millions of people. Use it wisely, never get discouraged, and always try to do good….[/vc_column_text][vc_column_text]

If you want to check out FtC’s digital look book on our talk with Giorgio Moroder, click here.  or to share with a friend, bit.ly/2nFO75R

Alberto Montado is an award winning designer and business marketing specialist from Cadiz. He has worked with international giants such as Vodafone, Warner Bros and Mattel, headed many national and international advertising campaigns, built significant national brand identities and even excelled in clothes design and interior decoration.
Contact: info@albertomontado.com

The Stage is a Temple: The Conscious...