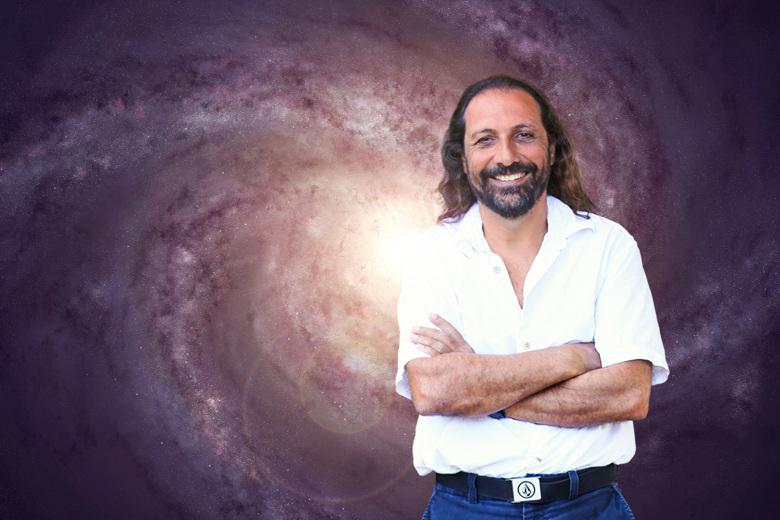 Space travel and the manipulation of gravity. Education and economics. Consciousness and reality. What do these things have in common?  Visionary Scientist, Physicist, and Founder of the Resonance Science Foundation, Nassim Haramein has spent the past several decades working on esoteric concepts once reserved for the greatest minds that the world of physics and mathematics has ever produced. Concepts that occupied the minds of Einstein and Tesla and that spawned quantum physics, along with the incredible world that came to our awareness with it.

Haramein has written peer-reviewed papers on these concepts that are currently being debated – and celebrated by academics the world over. For those of us not as steeped in the ideas that rule the subatomic world, he has recently created and released a beautiful and informing film called, “The Connected Universe” which puts everything into perspective. The breadth of implication that Haramein’s findings have produced is mind-blowing. In this Earth Day edition of Face the Current, he reveals how we are capable of powering the planet with almost no ecological impact and actually quantifies our connection to the earth, and to each other.

Face the Current: Dr. Michio Kaku explains what Einstein called “spooky action at a distance” in his book “Einstein’s Cosmos,” which describes how “atoms in our body may be connected with an invisible web to atoms on the other side of the universe, such that motions in our body can instantly affect the state of atoms billions of light-years away.” How does this theory place in your current research?

Nassim Haramein: That is a very interesting question, because we’re talking about entanglement at the quantum level. For people that are not familiar, it was first demonstrated theoretically at the quantum level and then measured multiple times in modern laboratories that a particle can be entangled. Actually, at this point they have even been able to entangle macro objects like diamonds. If you modify the polarization of a particle with another particle at a distance (and it doesn’t matter the distance- the particle can be on the other side of the Universe) – if these two particles are entangled, when you modify one, the other one on the other side of the Universe is modified instantaneously, as if they were connected by some invisible network that is faster than the speed of light. It’s instantaneous. We know that it’s true because we’ve been able to measure it in laboratories.

What happened in those tests is the following: Imagine hitting a carbon particle with a laser and emitting two photons that are going away from each other, and imagine that they hit at the very end of a long, long tube that can be miles long… (and it’s been done, where on one end of the tube there’s a polarizer that changes the angle of one of the particles). Then there’s a detector a very, very short distance from the polarizer that detects the angle, right? Well, when you do that, if the distance between the polarizer and the detector is very, very short, you can calculate how long it would take the information to get to the other particle at the speed of light. If that distance is larger than it would take at the speed of light for the information to get there, and if the two particles arrive at their detectors at the same angle, then you know that they communicated instantaneously.

So, you know that these particles are entangled, or are in a state of coherency. Then parallel to that, in relativistic physics- the physics of large things like galaxies, black holes, stars, and in the physics of gravity- it was discovered that there can be things that form in the structure of space-time that are called “wormholes.” Two places in the Universe that are very far apart from each other can be connected instantaneously through a wormhole, when space-time is very curved.

Early on in my research, I concluded that particles were little black holes, and when they got entangled it was because there was a wormhole that connected them. That sounded very, very strange at the time. It still sounds strange to some physicists but now some of the top physicists in the world like Leonard Susskind, have come up with similar theories. One is called ER=EPR where “ER” is “Einstein-Rosen bridge,” which is the wormhole equation and “EPR” is “Einstein-Podolsky-Rosen,” which is entanglement. It’s basically saying that particles are entangled because there’s micro wormholes that form in the structure of space that connect them. This has a large impact on the equations I wrote, which showed that all particles are entangled.

So, they might not be entangled directly, right? Now, for instance, we can entangle two diamonds so that a laser hits one diamond on one side of the lab, and the diamond on the other side of the lab acts like it’s being hit by the laser. You can imagine that the application of something like that would be amazing, but what is important here is that when I wrote the equation to describe the source of mass – and we call that the “holographic mass solution” – there was something strange that happened: When I calculated the amount of energy information that’s inside the nucleus of an atom, inside the proton in the center of an atom, it said that all the information of all the other protons, or the mass energy of all the rest of the universe was present in one proton, like a holographic structure. So it’s saying that at every point, every atom is in contact through these micro-wormholes, entangled with everything else in the Universe. Of course, if we all came out at one point, which is the current big bang solution (and I don’t necessarily agree with the big bang, but something along those lines), then everything would be entangled.

Now, why can’t we see every atom being entangled with every other one? Well, because they might not be directly measured in our awareness. For instance, we might move a particle here (and this is what Dr. Michio Kaku explained in his book), but it might be entangled with a particle that is on the other side of the Universe. We don’t measure that it is affecting anything, because when you’re modifying “this” particle we are not measuring the other one on the other side of the Universe, right? The whole thing could be entangled and we wouldn’t know because we only see the entanglement of particles in which we have direct access to both ends of the wormhole.[/vc_column_text][vc_single_image image=”1672″ img_size=”full” alignment=”center”][vc_column_text]FTC: So, not all particles are necessarily entangled, then?

Nassim: What the equations that I wrote show is that yes, they are. That is, they’re all entangled, but it’s not necessarily available to our measurement because the other particle that the one particle is entangled with could be on the other side of the Universe and we can’t measure it.

It leads to the concept that the whole Universe is connected. What’s really exciting is that when I wrote the math to calculate this connection – basically, I wrote the math to answer “what is the influence of all the protons in the Universe on one proton?” to try to figure out how they’re talking to each other. When I made those calculations it gave me the exact mass of the proton that we’re measuring, very precisely. So imagine an equation then, that has the mass or the information of all the things in the Universe – which is a very large number. By the time you finish the equation it outputs exactly the mass of one of the protons, which is a very small number, and it outputs it with a high level of accuracy (like, a lot of significant digits after the period). Using that equation I predicted exactly what the radius of the proton should be, because I basically calculated how many little wormholes are connected to that one proton. I predicted what it should, but the standard model said it should be four percent larger than my answer. So, I said that the standard model was wrong by four percent. Then they measured it in the laboratory more precisely than ever before and it came out four percent smaller than the standard model predicted! My theory to this day is actually the most precise theoretical prediction of the radius of the proton in the nucleus of the atom, which is really important in physics.

This is a condensed version. Enjoy our full interview with Nassim Haramein, published in Face the Current April edition pages 32-45, subscribe HERE!

Click here to enjoy lots more inspiration to fuel your life, passion, spirit in Face the Current April edition. Digital or print? You can purchase either or both! Or to subscribe, just click here!

Sasha serves as Founder and Editor in Chief of FtC.  A self proclaimed perspective seeker, adventurer, and explorer. She received her Master’s Degree in Liberal Arts and continues to study a variety of subjects within and outside of the academic setting.  Bringing a personal moonshot approach to life through FtC, aiming to provide an experience for FtC’s global community to inspire one another to stay curious, never stop exploring, and to live on-purpose and to-potential.

The Global Impact of the “Convenience Lifestyle”...