Nature’s Call For Collective Sustainability – Jackson Hole and Beyond 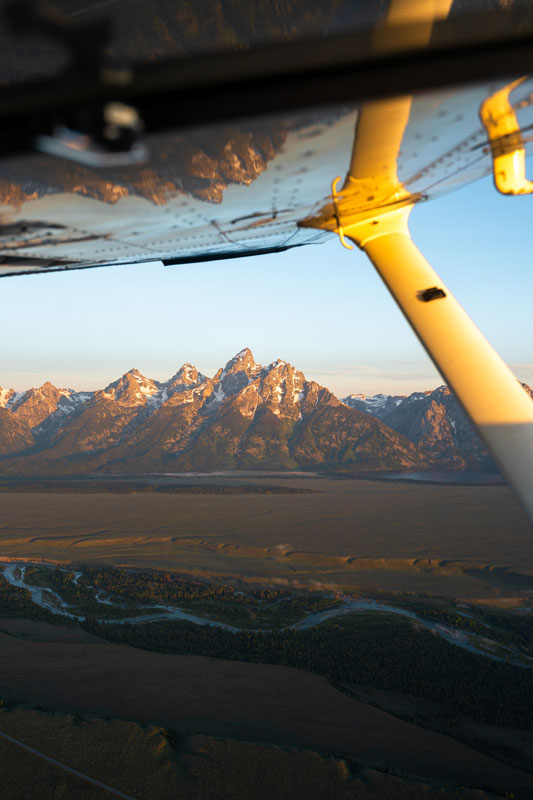 Has there ever been a special place that you’ve visited, held in your heart, and fondly remembered long after you left?  A safe haven and a place above all others that will always be special to you, that feels true to your heart, being, and soul? For some, Jackson Hole, Wyoming is that place; a place above all others boasting a selection of the tallest and most magnificent peaks in the country. For many decades, Jackson Hole has been a popular retreat, an adventurer’s haven, and a vacation destination for thousands of families. It is known for its surreal mountain peaks, abundance of wildlife, breathtaking active geysers, and its exquisite beauty that runs from the town to the Grand Tetons, Yellowstone, and everywhere in between.

This Face the Current Travel Feature is published in Issue 25 Sept/Oct 2019 Edition.  Order PRINT here, SUBSCRIBE to digital membership for unlimited access, or continue reading this article below.

Recently, photographer and filmmaker Kevin Eassa went on a mission to highlight this beautiful area from a unique perspective. He was welcomed by Jackson Hole locals and taken out on two scenic flights one summer morning to capture this stunning region from above. The first flight showcased the beauty of the Grand Tetons mountain range in the early hours of the morning, with the peaks lit up by the rich orange glow of the sunrise. This journey started on the east end of the range, followed its way around Snake River, curved around the northern park boundaries, and ventured back down the west side of the range—all the while getting up close and personal with the peaks! Even with the circuitous nature of the flight, the pilot respected national park boundaries designed to preserve the lands and respect those exploring in the park.

The first flight was bound to continue on to Yellowstone, but from a distance, it was obvious that the entire park was covered in fog. Because of this, the pilot suggested heading back to the airport and returning later in the day for another flight. He mentioned that Yellowstone’s biggest attraction, Grand Prismatic Hot Spring, was best viewed from above during the middle of the day, and it didn’t disappoint Kevin. The midday sun beamed directly on Grand Prismatic, enhancing the already rich colors of the geysers and making it one of the most spectacular landmarks in the country. Kevin even heard many folks refer to it as “the beating heart of Mother Earth”.

Afterward, while ruminating on the flight, a few concerning issues became apparent. Jackson Hole’s undoubted beauty, upon later reflection, highlighted some scary and important concerns during the tour. First and foremost, Kevin observed formed glacial lakes that he learned were new to the landscape. While beautiful, the photograph of the mountain with an aqua blue pool at its base is actually highlighting snow melt-off as a result of the warming climate.This is a stark reminder of the magnitude of our environmental problems. As Kevin witnessed from above, it was yet one of many glacial locations around the world melting at an unprecedented pace, hurting our planet more than the naked eye can perceive. According to National Geographic, arctic permafrost isn’t gradually thawing, as was once the commonly accepted presumption. Thaw is happening almost overnight, releasing troves of ancient life and large quantities of carbon that have been trapped for millennia in the frozen dirt. Today, the arctic landscape is much greener than any of us are probably comfortable imagining, with fewer caribou and reindeer, warmer summers, and more mosquitoes. Even summer sea ice that covers much of the Arctic Ocean during the region’s brief seasonal thaw has been quickly disappearing.

Certain global locations are directly impacted by tourism and social media, and Jackson Hole is exemplary of this. As of recently, the community of Jackson Hole came together to create an online movement with the aim of protecting wildlife, the environment, and the rich culture of their community. The initiative is called “Keep Jackson Hole Wild” and its key elements for residents and visitors are as follows: use public transit, give wildlife space, road to zero waste— reduce and recycle, stay on the trails, go forth and educate, and responsibly tag locations. Jackson Hole’s initiative is one that can—and should—set an example for the rest of the world.

Having a destination dubbed “Instagrammable” has become a far bigger problem than anyone could have ever predicted, and its side effects are prolific. Jackson Hole deeply cares about sustainability and our environment, but when geo locations are tagged on social media, it launches a massive surge in tourism and excess traffic. This in turn has proven to be extremely destructive to local ecosystems and wildlife.

A recent United Nations report confirmed that as many as one million animal and plant species are in danger of extinction in the coming decades as a result of climate change and our reckless use of resources.

For example, the butterflies of the world are under intense pressure from habitat destruction, with many populations rapidly diminishing before our eyes. A recent study found butterflies in Ohio had declined by thirty-three percent from 1996-2016. This rate is unfortunately consistent with worldwide patterns and has devastating effects on crop pollination and our food supply-chain.

When popular influencers geo-tag their exact location, their millions of followers are heavily influenced to replicate that travel experience before it becomes redundant. In reality, to find a new “hot spot” that has yet to be exploited on social media takes a lot more work than most people realize. It can take hours on Google Earth, days and weeks of research and planning, and a healthy dose of money and stress. When a photographer or influencer posts a photo online of a never-before-seen location, their follower count goes through the roof and the image is shared on dozens of big feature pages. While this may seem awesome and like an easy way to explode your following, it has detrimental effects on our planet that we need to start recognizing. With great influence comes great responsibility! There needs to be a level of consciousness that is greater than life. When quiet places are found for the first time, we need to hold a moral duty in our hearts to keep those places quiet and to keep them as wild as we found them. If it took you weeks to find a wondrous location, let others discover it for themselves and enjoy the fun of true exploration!

Sustainability is one of the most critical missions in the world right now. Our carbon footprint is the biggest it has ever been and Mother Earth is truly on the brink of disaster. Catastrophe abounds daily, from natural disasters, to our dying oceans, to political unrest. As reported by TIME magazine last year, India, among other places in the world, is now in a “sustained water crisis” as the result of climate change, increases in demand, and mismanaged water resources.

However, it is all of our duties and responsibilities to make a conscious effort to practice sustainability in our daily lives. We can take simple actions such as: take shorter showers, use reusable bottles, take your own shopping bags to the store, be more aware of your food’s environmental impact—these are everyday things that add up to a world of difference to our planet.

Think of this: according to the World Resources Institute, for every can of garbage you place at the curb, there are eighty-seven cans worth of materials that come from the extraction industries that turn natural resources into the finished products we buy. Remember, what you buy is what you support! If everyone stopped buying products that have a negative effect on the environment, those products would stop being made! It is possible, and it is not too late to save our planet. This is our collective home, after all.

The sustainability of our planet is bigger than all of us, and it is so much bigger than Jackson Hole. However, with daily consciousness and practice, we can stop ruining beautiful places with geo-tagging and we can make daily changes that will compound to save our planet. Do your part, educate yourself, and live a conscious lifestyle with minimal impact. We must all come together and follow Jackson Hole’s example. If we succeed, its worldwide impact will be amplified for the better.

Kevin Eassa is a professional landscape photographer and filmmaker who has been traveling the globe non-stop for three years. After leaving university shy of a finance degree, Kevin worked 120 hours a week between four jobs to fund his true passion. Six months later, Kevin left everything he knew to pursue his dream of photography and filmmaking. At twenty-four, Kevin has now explored forty-one countries, solidified his brand, and continues to offer his talents to individual clients, corporate brands, and luxury resorts and much more.

Nature’s Call For Collective Sustainability – Jackson Hole and Beyond was last modified: May 19th, 2021 by Kevin Eassa