On The Devil’s Road: An Overland Expedition through Baja California 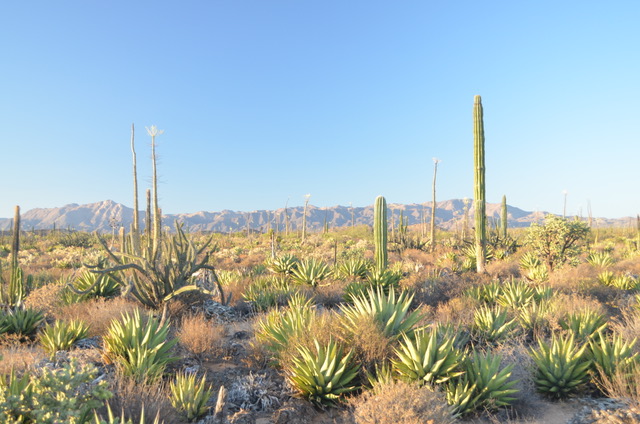 Four years ago, four California filmmakers set out to bring a historic expedition out of obscurity. The result was a two-month, 5,000-plus-mile ride through the Baja California deserts and a feature-length nature-adventure documentary called The Devil’s Road.

A culmination of years’ worth of research, outfitting, exploration, filming, and post-production work, The Devil’s Road: A Baja Adventure revives the pivotal work of two of America’s most prolific naturalists: Edward William Nelson and Edward Alphonso Goldman. While these are not household names, their research laid the foundation of scientific studies in Baja and were viewed as a link between Darwin and present-day scientists. 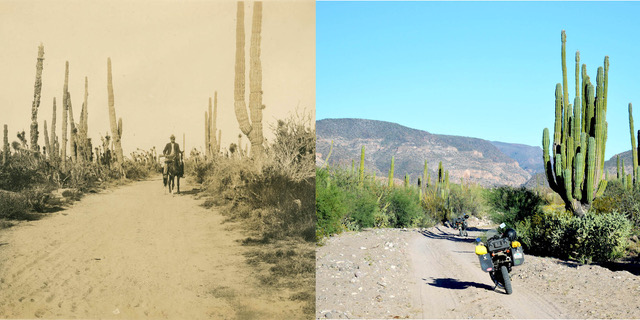 Nelson and Goldman’s landmark expedition in 1905-1906 was unprecedented and completed in a time when the Baja Peninsula was considered one of the most remote and challenging areas in all of North America. The peninsula extends over 775 miles, separating the Pacific Ocean from the Gulf of California. For much of its early history it existed only as a myth and was later thought to be an island for a very long time. Early conquests by European explorers and Spanish missionaries eventually gave way to a new wave of explorers––scientists set on studying the unique lifeforms of the region. These pioneers’ initial efforts would be pivotal in declaring Baja as one of the most biodiverse regions in the world, home to endemic species found nowhere else.

Nelson and Goldman were the first naturalists to document, catalog, and obtain specimens of the entire peninsula’s never-before-studied flora and fauna, all while trekking over two thousand miles on horseback through some of the continents most rugged, inhospitable terrain. Together they collected over 6,000 mammal, bird, and plant specimens, and amassed an enormous fund of information on the natural history of Baja. Their specimens, many of which reside in the collections of the Smithsonian Institution and other museums around the world, ultimately included several hundred plants and animals that were previously unknown to science. 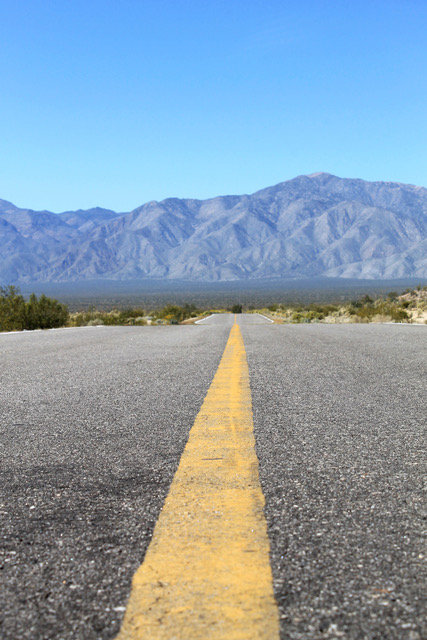 President Theodore Roosevelt praised Edward William Nelson as “one of the keenest naturalists we have ever had.” The work these two naturalists did in Mexico has been described as “among the most important ever achieved by two workers for any single country.” Nelson and Goldman’s expedition was the most thorough and complete studies of Baja’s ecosystems. They would later spend their careers heralded as some of the most adept naturalists of their time, with hundreds of plants, animals, and geographical features named in their honor.

However, it wasn’t just the early achievements of these two famed naturalists—though undeniably obscure outside of academic circles—that motivated the film crew. “It was only recently that, coincidentally enough, we learned our ‘Uncle Ed’ was the famed naturalist Edward Alphonso Goldman that worked with Edward William Nelson to explore the Baja Peninsula. I have been traveling around Baja with my family since 1990. We had no idea we had much deeper roots there,” explains Todd Bruce, the producer of The Devil’s Road, and the great grandnephew of Edward Goldman.

“Baja has captivated us over the years. Nelson and Goldman’s accomplishments, coupled with our familial connection to this unique place, were driving forces behind creating the film.” 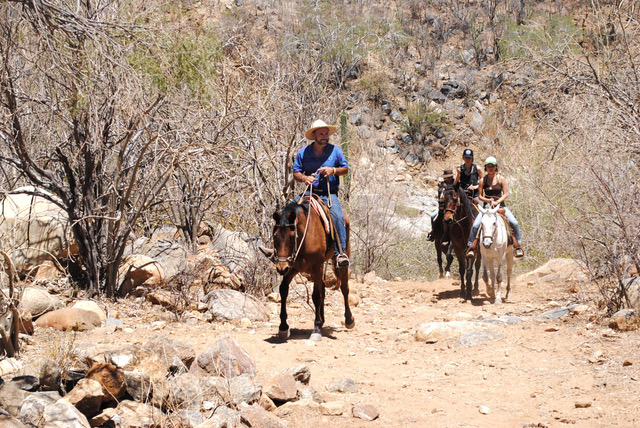 At the end of 2015, the crew behind The Devil’s Road made it official: They were going to recreate, as closely as possible, Nelson and Goldman’s original expedition on the modern-day equivalent of horses––overland adventure motorcycles.

In early April of 2016, the team made a trip to the nation’s capital to pour through documents and glass plate negative photographs in the archives of the Smithsonian Institution. With latex gloves, they sifted through letters between President Theodore Roosevelt and Nelson, read field notes written over a hundred years ago by Goldman, and inspected century-old photo albums and specimens collected by the pair during their expedition. The film crew was also invited by the California Academy of Sciences in San Francisco to film archived specimens of mammals and birds collected by Nelson and Goldman during their time in Baja. 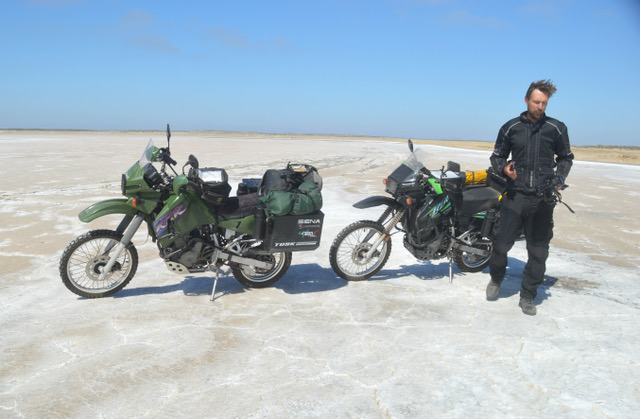 After a small crowdfunding campaign and support from family and friends, the film crew began the arduous task of examining the original 1905 and 1906 Nelson-Goldman expedition route. Meticulously deciphering Nelson and Goldman’s antiquated terminology and common-place names, the crew soon realized that many of these names were not in use today. They consulted other publications that mentioned the expedition, cross-referenced their data, and attempted to match the original route with modern maps, Google Earth, and––albeit limited––geological maps from the Mexican government.

The original expedition loosely followed the El Camino Real, the road system connecting the Spanish missions. Though parts of this route still exist today, many trails have been lost to time, and Nelson and Goldman would routinely travel cross country through dangerous and impassable terrain. The crew’s past years of experience traveling through Baja allowed them to pinpoint some key points of interest along today’s roads; however, many roads through Baja are unmarked. Signs are usually non-existent, maps are frequently inaccurate, and what verbal directions could be obtained from locals was tricky to decipher. 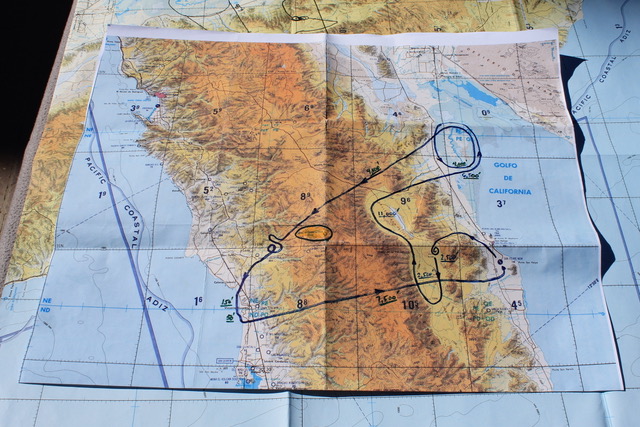 With a route drawn onto a current map, waypoints inputted into a GPS, and turn-by-turn instructions where no map or GPS would be useful (e.g., turn right at this “Y” by the abandoned car), the crew turned their attention to outfitting their motorcycles for the journey. They were going to attempt to complete the expedition in two months, and be completely self-sufficient, all while carrying seven cameras and all camping and personal gear on two first generation Kawasaki KLR 650s, purchased used. And all of this had to be done on a micro-budget. 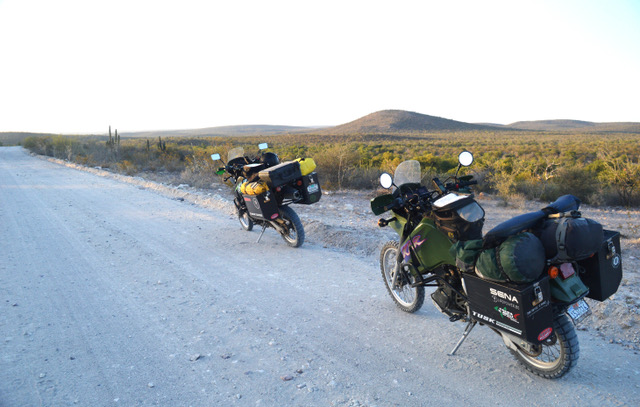 The pair had never ridden bikes larger than 250ccs, let alone fully loaded with gear for a two-month expedition, until crossing over the US-Mexico border at the start of their expedition on March 1st of 2017. The crew spent most nights sleeping on the ground—at points surrounded by snow, beach, cactus, and all the imaginable creepy crawlies. Every third or fourth day they sought the comfort of a hostel or hotel to charge electronic devices and connect to wi-fi to send data back home.

The father-son duo traversed the Baja Peninsula, joined by reinforcements for specific segments. In San Felipe, they met with members of the Bruce family to secure aerial footage of northern Baja and search for the endemic Nelson trout (named in honor of Edward Nelson). They rendezvoused with Greg Meyer, the film’s scientific advisor, to film the central desert of Baja and find Goldman Peak (named in honor of Edward Goldman). Bri Bruce, the film’s associate producer, and her team met the crew in the cape region to film the Baja surf scene and horseback ride into the Sierra la Laguna along the original expedition route. 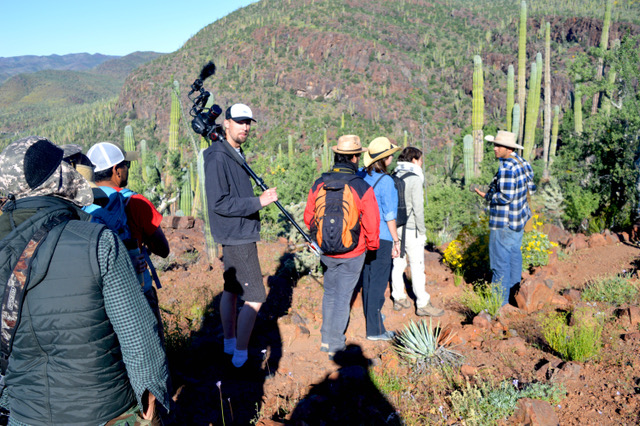 The Devil’s Road documents the crew’s thrilling quest—by motorcycle, airplane, boat, and horseback—across Baja where, along the way, they observe the vibrant culture and unforgettable people while also enduring the challenges of the road. The film includes interviews with biologists and conservationists that provide a reminder of how grueling the original expedition was and why Nelson and Goldman’s work was so fundamental, also offering insights into the precarious future of the fragile ecosystems of Baja—and beyond.

“Much like our predecessor that inspired the film, knowing Baja on a more intimate level makes it incumbent upon us to be stewards of such a unique corner of the world. By sharing it with viewers we hope to help make a case for its conservation,” says Bri Bruce, the film’s associate producer. “Baja is truly a magical place. There’s really no other way to describe it. I think I speak for anyone that has been fortunate enough to really witness it—stand in its deserts, swim in its oceans, get to know both the animals and the people there—they’ll see it’s worth fighting for.”

“Baja is a biodiversity hotspot,” explains The Devil’s Road Scientific Advisor Greg Meyer. Meyer is an educator at California State University, Monterey Bay, and a professional naturalist who led his first trip to Baja in 1985. He has traveled extensively throughout the peninsula, working for the Oceanic Society, Lindblad Expeditions, National Geographic Expeditions, and the BBC. “The Baja Peninsula is still one of the great wildernesses on earth and this film project has allowed us to see the changes over time and to highlight why it needs protection today.”

JT Bruce, the film’s director, expands on the themes of The Devil’s Road:

“Our film is not just a historical documentary or motorcycle road movie. It’s not a reprimand on the audience for some perceived failure to protect the environment. It’s a chance to gain a wider perspective and view the trajectory that our planet’s ecosystems are on, and to help people make their own decisions about how we should approach the future.” 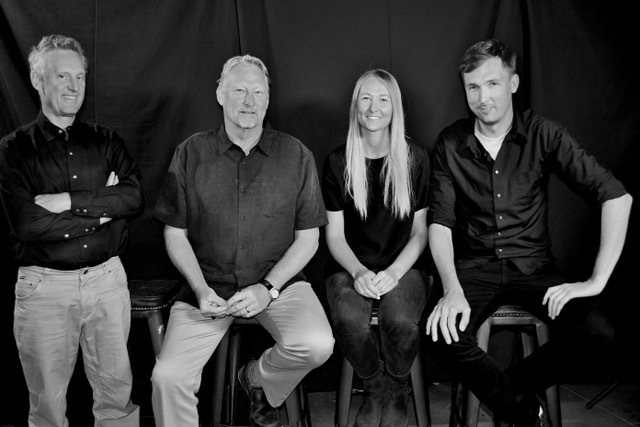 The film shows a complex interplay between past and present, and weaves together themes of discovery and change while serving as an environmental call to arms that pays homage to the strange and awe-inspiring Baja California. In an exciting mix of history, nature, and exhilarating adventure, The Devil’s Road is sure to entertain, educate, and inspire.

The filmmakers anticipate a year of showings throughout the U.S. and internationally as they begin their film festival tour.

To learn more about the project, visit www.devilsroadfilm.com

On The Devil’s Road: An Overland Expedition through Baja California was last modified: April 2nd, 2019 by devilsroadfilm

Broken Wagon Films, LLC, is an independent film production company based in Santa Cruz, California, and comprised of JT Bruce (Director), Todd Bruce (Producer), Greg Meyer (Scientific Advisor), and Bri Bruce (Associate Producer). The Devil's Road: A Baja Adventure, is their debut feature-length documentary premiering April 2019. The Bruces are direct descendants of prolific naturalist Edward A. Goldman, of which the film is partly based.

Beyond the Borders of Convention: Life-Changing Treks...