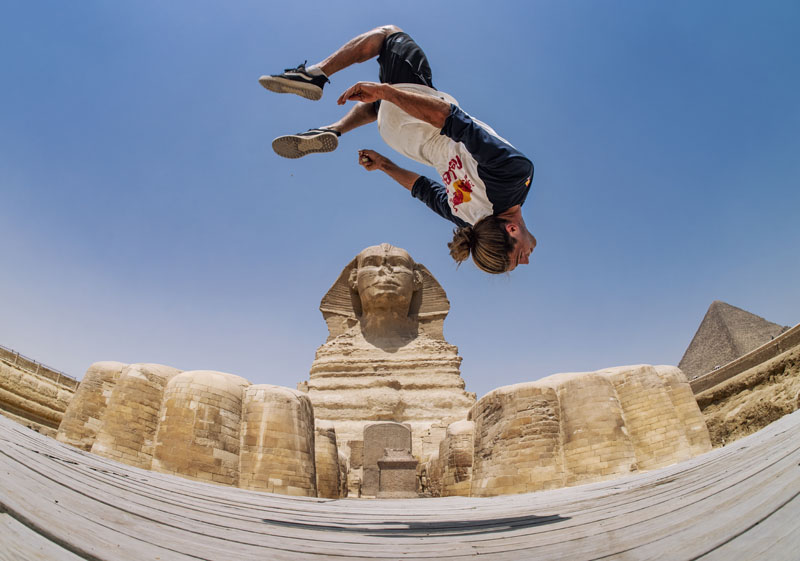 It’s that time of year again when, after a winter-long hibernation of sorts, the weather beckons and nature offers up Her beautiful playgrounds. Whether it’s a trail-walk, hike, bicycle ride, canoe voyage, or lake-swim, outdoor adventures abound and serve as platforms for healthy and fun ways to explore and enjoy our planet while also moving our bodies.

While most of us experience our outdoor adventures at a leisurely pace and level, there are those athletes who search for the most extreme locations and circumstances to test their limits and stake their claims to shocking achievements. Red Bull athletes Kilian Fischhuber, Dominic Di Tommaso, Dane Jackson, and Rob Warner show us what it means to excel at a sport, take it to new heights, and push the boundaries of human capability.

This Face the Current Sports Feature is published in Issue 29. Order PRINT here, SUBSCRIBE to digital edition for unlimited access, or continue reading this article below.

Climbing—or bouldering—isn’t for the faint of heart. Performed on small rock formations or rock walls without the comforting aid of ropes or harnesses, climbing can be both an exhilarating and a nerve-wracking sport. Austrian climber, Kilian Fischhuber, is a professional sport climber and rock climber. From 2005 to 2011, Kilian claimed five Bouldering World Cup titles and no other male climber has come close to challenging his record. He was awarded the La Sportiva Competition Award in 2009 in honor of his spectacular career.

In 2018, Kilian led an expedition to one of the world’s most remote Siberian locations to tackle the Sundrun Pillars (aka the “Granite Cities”) of Ulakhan-Sis. Similar in appearance to the idols of Easter Island, the Sundrun Pillars are believed to be the sculptural result of the relentless and severe freeze-thaw cycle of the granite and surrounding sandstone. After a few photographic expeditions to this unexplored corner of the world, professional climbers journeyed to the Granite Cities to see what climbing adventures awaited them on the twenty to thirty metres-high vertical cliffs. Kilian joined Russian photographer Sergey Karpukhin and two fellow climbers through three days of punishing tundra hiking before they arrived at the pillars.

“My education gives me a clear understanding of how exactly this natural landscape appeared, yet even this did not stop me feeling as if this wonder was made by mysterious ancient civilizations. This part of Ulakhan-Sis should become a UNESCO World Heritage site, just like (Turkey’s) Cappadocia,” Karpukhin declared.

After donning his minimalistic gear, Kilian began his climbs and noted that, “The actual climbing was always very demanding as the rock quality worsened the higher we got; at times it seemed really soft!” All told, over the course of ten days on the tundra, Kilian achieved twelve new routes on twelve unique pillars.

“Egypt was a mind-blowing experience.. The hardest move, surprisingly, was dive-rolling over camels. It took a lot of coordination to place them in the right positions and then to place the cameras in the right angles—not to mention the sand beneath them was quite soft.”

Founded by Sebastien Foucan, freerunning is an athletic expression of interactions with various obstacles and the environment. Movements can include spinning, flipping, and other maneuvers adopted from gymnastics and breakdancing, but freerunners can also create their own moves and patterns as they flow between different landscapes. Creativity is a must in freerunning as it shares fundamental similarities with parkour yet is amped up by acrobatics that showcase the stylish athletic art of movement. Twenty-seven-year-old Australian freerunner Dominic Di Tommaso grew up figure skating and practicing ballet and honed his body’s ability to perform strength-reliant high-impact moves. In 2007, Dominic began freerunning and has since been a regular at Red Bull Art of Motion. Over three days, Dominic journeyed across Egypt in a magnificent video chronicle that saw him endure challenging weather and logistical conditions.

Dominic stretched the limits of his freerunning skills as he vaulted past the pyramids, Khan el Khalili “Old Market”, The Sphinx, The Nile, Salah El-Din Citadel, and the urban area of Nazlet el Semman. “Egypt was a mind-blowing experience and the shoot was everything I could expect and more,” he said. “The hardest move, surprisingly, was dive-rolling over camels. It took a lot of coordination to place them in the right positions and then to place the cameras in the right angles—not to mention the sand beneath them was quite soft.” As exhausting as freerunning can be, Dominic conceded that freerunning in Egypt was particularly tiring. “The thing I learned the most from this shoot was to learn my physical and exhaustion limits. Being able to shoot these long days in this heat was a really good test to find out how much I could actually put out, while maintaining my performance over three days.”

Kayaking, whether double or single, is a favorite and relaxing way to leisurely enjoy rivers, lakes, and oceans. However, once that kayak is intentionally plummeting over waterfalls and descents of mammoth proportions, kayaking instantly becomes an extreme sport. Twenty-six-year-old American kayaker, Dane Jackson, is the reigning ICF (International Canoe Federation) freestyle world champion. Jackson traveled the U.S. in an RV with his family and was home-schooled by his mother as they logged kayak competitions with his father, Eric Jackson, Olympic paddler and founder of Jackson Kayaks.

After winning the Whitewater Grand Prix in 2011, Dane has since dominated freestyle kayak competitions and has completed six waterfalls measuring at least 100 feet in height. Over the last decade, Dane has traveled the world in search of new and extreme descents, and most recently achieved the awe-inspiring 134-foot descent down Chile’s Salto del Maule waterfall. “Whenever there’s a moment where you get shown a waterfall that hasn’t been done, or you come across a photo, it always sparks something that makes you have to answer the question; is it possible?” recalled Dane. “I’ve been shown drops before, but when I was shown Salto del Maule four years ago, it’s the most obsessed I’ve been with a waterfall—constantly looking at photos and videos trying to make up my mind on it.”

After intense preparation including contingency plans and identified safety retreats, Dane decided to go for his dream and face Maule’s drop—a distance he didn’t measure beforehand. “I wanted to wait until after because, by looking at it, I felt it looked a similar height to what I have done before. Everything made me really confident in doing the line right, which allowed me to do exactly what I needed to do,” he explained. “If I had measured it beforehand and realized it was the tallest drop I had done, maybe I would have been more nervous or hesitant. I would have still had a great line, but I might not have had the same confidence.”

The sport of mountain biking is exactly what it sounds like: riding bicycles off-road on graded rough terrain. Because technically difficult descents and high incline climbs can be woven into the same mountain biking competition, riders need to have excellent core strength, balance, and long-distance endurance. Now-retired British downhill mountain biker, Rob Warner, was a three-time UK champion and claimed an historic victory at the UCI Mountain Bike World Cup championship in 1996.

Now, Rob presents with UCI Mountain Bike World Cup coverage on Red Bull TV and has ventured out on a stunning trip across four continents entitled Wild Rides. Joined on the trip by current mountain bike and downhill stars, Rob and his crew venture to discover the world’s most beautiful and hidden bike trails. As Rob explains, part of the joy of mountain biking lies in the adventure and exploration of a trail:

“That sense of exploring has always been a big part of it, for me. Thankfully I got to ride on some epic trails for this TV series with some of them downhill for nearly thirty kilometers. It was the best mountain biking I have ever done.”

Rob experienced breathtaking rides from trails in the Himalayas to Mount Kenya. “I have seen places that I never dreamt that I would see,” he exclaimed. “It is only just now, six months on, that it is sinking in a little bit.”