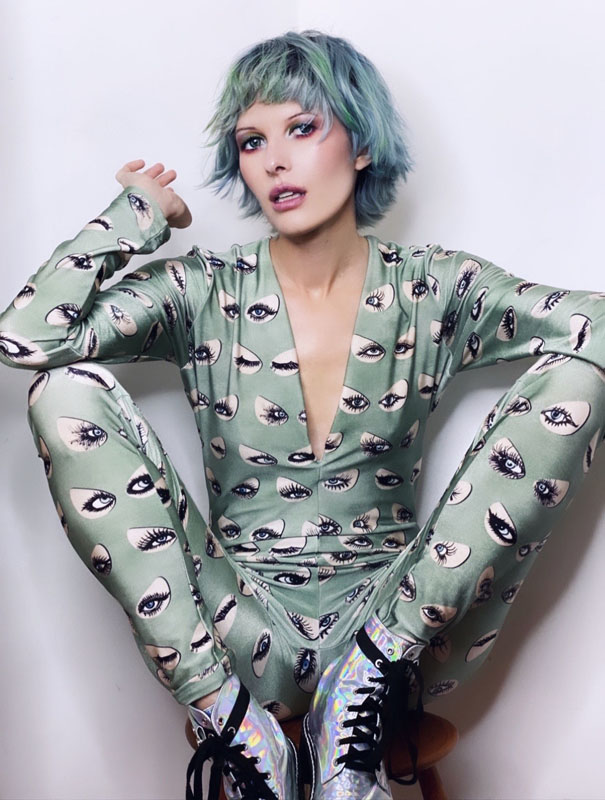 One of ten children raised in Jamul, California, Joy (Bishop) Downer grew up surrounded by music. Her mother often played the piano and listened to musical soundtracks while her father, a drummer in high school, loved to play Beatles songs and listened to classic rock and roll, and country tunes. “We lived in a pink house with blue carpet, perched on the top of a hill with fruit trees and horses, lots of dirt to ride bikes, and a trampoline to get hurt on constantly,” she recalled. Many people in Joy’s community played instruments and sang, and she credits those childhood years with her ingrained love of music.

This Face the Current Music Feature is published in Issue 30. Order PRINT here, SUBSCRIBE to digital edition for unlimited access, or continue reading this article below.

In grade school, Joy found ways to intertwine classroom learning with her affinity for and connection to music. She discovered that song writing could be used as a tool to help her learn and recall new topics. “It seemed to be the only way I could retain information,” Joy stated. She even used music and lyrical expression to help make sense of her own feelings. “I would also write about my feelings of depression,” she revealed. “Though I didn’t know what depression was at the time, and with no one to open up to about what I was feeling, music was my only form of therapy.” She continued to write into high school, with her lyrics and storytelling thematically leaning toward romance. Joy shared one of these early compositions with her then boyfriend who suggested that she try to sell her song to a “real singer” like Britney Spears. (In the following years, this irritating advice became something that Joy was happy to have ignored.)

During her senior year of high school, Joy was homeschooled to allow for more time to be devoted to her burgeoning modeling career. As she focussed more of her time on this path, she traveled the world as a model for eight years, working and living in Australia, London, Los Angeles, and finally New York City. While living in New York in 2008, Joy decided to venture out to San Diego to visit her brother, Jon Bishop, a DJ on the forefront of the Southern California techno scene and a member of the band Crash Encore.

Joy met Jon at Capricorn Studios where he was recording with his band, and upon entering, she saw her future husband for the first time. “Inside the live room playing some really beautiful guitar sat Jeffery, my brother’s new best friend,” she recounted. The band played her a new song they’d been working on and Joy immediately heard a melody that intrigued her. Jon and Jeffery encouraged her to record the track, and so it serendipitously happened that Joy marked her first ever studio recording.

Joy hadn’t returned to New York City for very long when Jon and Jeffery requested her return to San Diego to further collaborate on the album. The decision to return and dive further into that album became a turning point in Joy’s life, both personally and professionally.

When Joy realized she needed to remain in California for the next chapter of her life, Jon suggested she stay with Jeffery. “The joke here is that I moved in and never moved out,” Joy mused. The two connected romantically and moved to Los Angeles so Joy could reignite her modeling career while the couple worked on their music in parallel. However, Los Angeles’ high cost of living proved a challenge, and the couple found themselves working multiple jobs just to survive. As a result, their music shifted to the back burner for the next six years.

That all changed five years ago. “In 2015 I said, ‘Screw it! I’m quitting all my jobs and spending six months working on music,’” she said, “and I did just that.” Out of that focussed musical period came Joy’s debut solo EP, Radio Dreamer which she recorded with producer Rob Kolar in 2017. When Rob started touring with his own band, Joy decided to instead work on her debut LP Paper Moon at home with Jeffery. “We’ve had the opportunity to really strengthen and home in on our musical capabilities,” said Joy of working with her husband. Doubling-down on her familial connection to music, Joy felt it was important to include her family members on the album. “I sampled voicemails from both my mom and dad, had my mom play piano, had my brother Jon sing and play guitar at the end, and my sister Jaime played some harmonium,” she explained. “There’s even a song I started writing at age seventeen that I didn’t ‘sell to a real singer like Britney Spears’ which is the opening track song, ‘A Song You’d Never Want to Hear’.”

After three years of writing and recording in her home studio in Los Angeles, Joy Downer released Paper Moon on June fifth and itis a sweeping album displaying ranging inspirations from Broadway musicals to disco and punk rock. Self-described as Alternative Dream Pop, Paper Moon highlights a seamless blend of Joy’s addictive vocal melodies, synths, drum machines, and guitars in a stunning collection of nine songs. Through the first weekend of the album’s release, Joy donated all proceeds to Black Lives Matter LA, and she continues to reach fans through Refinery29, BBC Radio, FLOOD, UPROXX, The Line of Best Fit, Blackbook, Popular, Apple Music, and Spotify. Joy’s music has been featured as the theme song for the Netflix original Series Spinning Out, and she was also recruited by renowned production duo Superhuman to cover “Somewhere Over the Rainbow” in a Honda television commercial.

For Joy, each song in her catalog captures her current mindset and feelings, and song writing continues to provide her with her own form of restorative therapy. “I wrote most of my songs in a stream-of-consciousness way,” she explained, “so if I’m asked what they mean, I’m often still trying to figure that out myself. So, I would say, whatever it means to you, that’s what it means.”

Rising Up to the Paper Moon with Singer-Songwriter Joy Downer was last modified: March 30th, 2022 by Ainsley Schoppel

TNSO and Sound Balms® – The Healing...