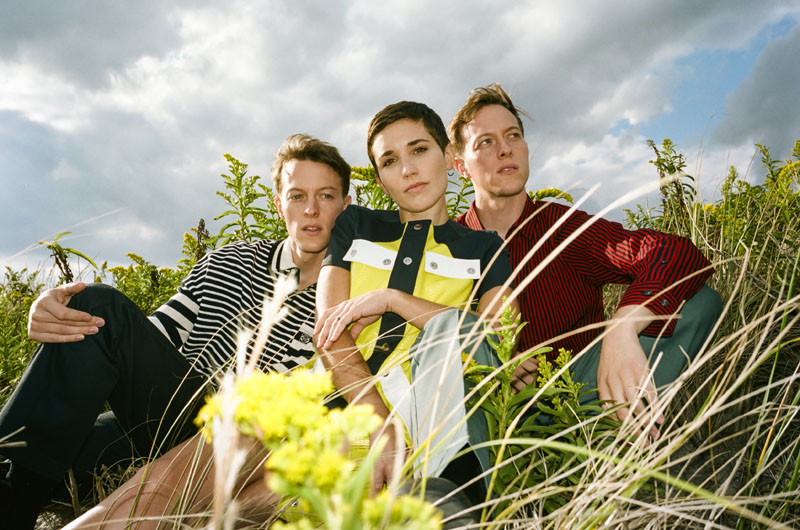 Washington D.C.-based group, SHAED (pronounced “shade”), has been performing together since the trio formed in 2011. Comprised of lead vocalist Chelsea Lee and multi-instrumentalists Max and Spencer Ernst, SHAED has recently emerged as one of America’s top indie pop bands. With personalities and backgrounds that are just as exciting as their chart-topping songs, the band has quickly made an abundance of fans around the world.

Max and Spencer are twins who grew up with musical roots in Silver Spring, Maryland. The two started their first band when they were in middle school and began touring the country before they finished high school. While attending the University of Maryland, Max and Spencer created The Walking Sticks—a folk-rock duo that would soon be complete with the addition of Chelsea and her incredibly powerful voice.

This Face the Current Music Feature is published in Issue 33. Order PRINT here, SUBSCRIBE to digital edition for unlimited access, or continue reading this article below.

After a 2016 name-change, SHAED signed with Photo Finish Records in June of the same year. October of 2018 was a transformative and monumental month for the trio, as Spencer and Chelsea were married only a few weeks before Apple debuted their MacBook Air commercial featuring “Trampoline”.

SHAED also recently collaborated with Teen Line to provide young people with the hope and assistance they need during difficult times. Through a helpline of professionally trained teen counselors, Teen Line works to destigmatize and normalize mental health by offering a non-judgmental space for young people to anonymously seek the help they need.

Face the Current connected with SHAED to discuss their unfolding experience with success, the inspiration and processes behind the creation of their songs, and their personal response to the pandemic’s challenges in the arts.

Ty Johnson: Your debut album High Dive is coming out on May 14th. What was it like to put together your first complete album? Have there been any specific difficulties or surprises along the way?

SHAED: Before the pandemic we had an album’s worth of material ready to release; a collection of songs we had written throughout the years in between tours and with various writers and producers. But when the pandemic hit, we took a hard look at our work and we just weren’t happy with it. It didn’t feel true to us anymore. So, we scrapped everything and started fresh, which was both scary and exhilarating. We spent the lockdown writing all new material that reflected the emotional rollercoaster we were experiencing. It was difficult to face at first, but it felt really freeing. This album tells the story of us.

TJ: Your hit song “Trampoline” originally stemmed from a home video of Spencer and Max jumping on a trampoline, and it has now become so successful that it has gone platinum. What are some of the key steps in your creative process, and why do you believe your music is able to connect with so many different people?

SHAED: We wrote “Trampoline” in the living room of our rental house in Silver Spring, MD. We came up with the line, “I’ve been having dreams, jumping on a trampoline,” after watching old home videos of Max and Spencer jumping on a trampoline. Then we started messing around with our Juno Roland Synth, and a melody quickly followed. We spent the rest of that day writing lyrics outside, taking a lot of inspiration from the natural surroundings around our home.

The Apple commercial really helped spread “Trampoline” internationally to people that wouldn’t have necessarily heard it otherwise. I also think a big reason why people connect to this song is because it leaves a lot of room for interpretation—it means something different to everyone.

TJ: “Trampoline” touches on the concept of pain and loss in a rather inspirational way. The line, “When (you) dream of dying is when you feel most loved” speaks of the dark emotions and realities to which so many people can relate. Why do you encourage your fans to face their fears and insecurities head on, and how have your own life experiences brought you to reach these deep philosophical understandings?

SHAED: I (Chelsea) have struggled immensely with my fear of dying so we wanted to create an Alice in Wonderland type song about embracing your biggest fears. We want people to understand that fears are inevitable and scary, but they shouldn’t control your life.

TJ: “2 in a Million” features world-renowned artists Steve Aoki and Sting. How did this amazing collaboration come about, and what were some of the highlights of this unique and special project?

SHAED: Steve Aoki’s team reached out saying he wanted a female vocalist on this song he was working on with Sting—we obviously said YES immediately because Sting is one of our favorite artists and we loved the song. Shortly after tracking Chelsea’s vocals, we shot a music video in New York with Sting and that was such a special moment for us. Both Sting and Steve Aoki are incredibly kind and super fun to work with.

TJ: The video for “No Other Way” was created using virtual production and LED walls of Unreal Engine technology. Describe what it has been like to use the same equipment and techniques as The Mandalorian and Batman.

SHAED: Making this video was an absolute blast. This was probably the biggest production we’ve ever done for a music video so far. We got on a plane for the first time since the lockdown and flew to Florida to shoot in the Unreal Engine studio. We spent twelve hours in the studio, shot for five hours, and then spent the rest of the day setting up the different environments (beach, desert, jungle, tundra, meadow). Unreal Engine really gave the illusion that we were in these different scenarios, which made it easy and fun to get into the vibe.

TJ: You are coming out with your first album following your Billboard #1 hit “Trampoline”. How have you handled the pressure that comes along with the success?

SHAED: Pressure is good. Pressure pushes you to be the best and we wanted this next batch of songs to be meaningful and intentional. We wanted to write an album that told our story, especially our emotional, physical, and mental journey throughout this past year. We are so close and comfortable with each other which makes facing the pressure and anxieties of this industry easier.

TJ: You have headlined and performed in many different festivals and events throughout the world. What have been some of your favorite experiences so far, and why?

SHAED: Being able to travel the world in 2019 and early 2020 was amazing. The highlight for us was the Summer Sonic Festival in Japan. We spent two weeks traveling from Tokyo to Osaka, exploring, eating, and playing two of the biggest shows we’ve had yet. It was such an amazing feeling being somewhere new and looking out into a crowd of people singing our songs.

TJ: The global pandemic has had an extreme impact on the ability of musicians to regularly perform. Do you believe that it is important to maintain live music events, or are online and virtual events enough?

SHAED: This past year has been incredibly difficult. It’s been hard to adapt to an entirely virtual career, essentially. We’ve been trying our best to be creative when it comes to online shows, but nothing will replace in-person shows. There is such an energy and vibe when we play to a live audience and we desperately miss the connection we get with fans when they are enjoying themselves. We can’t wait to get back on a real stage in a real venue.

TJ: You have known each other for many years, worked through a variety of genres, and even put out music under a different group name. What made SHAED feel like the perfect name, and how does it embody the journey of your group?

SHAED: We met when we were in high school but didn’t start playing together musically until many years later. I was a solo artist on a major label at the time and Max and Spencer were in a band writing primarily Americana folk music so we couldn’t fully join together as a band. When we finally became free of all other professional obligations, we decided to form a proper group. It took us a really long time to come up with a band name for the new project, but we found it after reading one of our favorite fantasy novels Wise Man’s Fear by Patrick Rothfuss. SHAED is a protective cloak, woven by a goddess. It just felt like a perfect fit for this next chapter.

TJ: Your songs have been featured in ads for some of the biggest brands in the world, like Victoria’s Secret and Apple. How satisfying is it to make such universally enjoyable music, and do you have any advice or inspiration that you would like to offer to other musicians and artists?

SHAED: I think our biggest advice is:

1) Do what you love. Create art that you believe in.

2) Keep at it. Overnight success is not a real thing. It takes a second to get things off the ground.

TJ: Face the Current is strongly focused on holistic health and self-care. Are there any specific techniques or routines that you would like to share with the fans?

SHAED: This year has been all about self-care. We’ve experienced so much anxiety and uncertainty that we’ve been trying to focus on what we can control: the here and now. We’ve been working on being more mindful and incorporating meditation into our day, and that has really changed our overall mental health.

Aligning Our Energies for Harmonious Living