The Feeling of Home: Reducing Isolation and Segregation for At Risk Populations 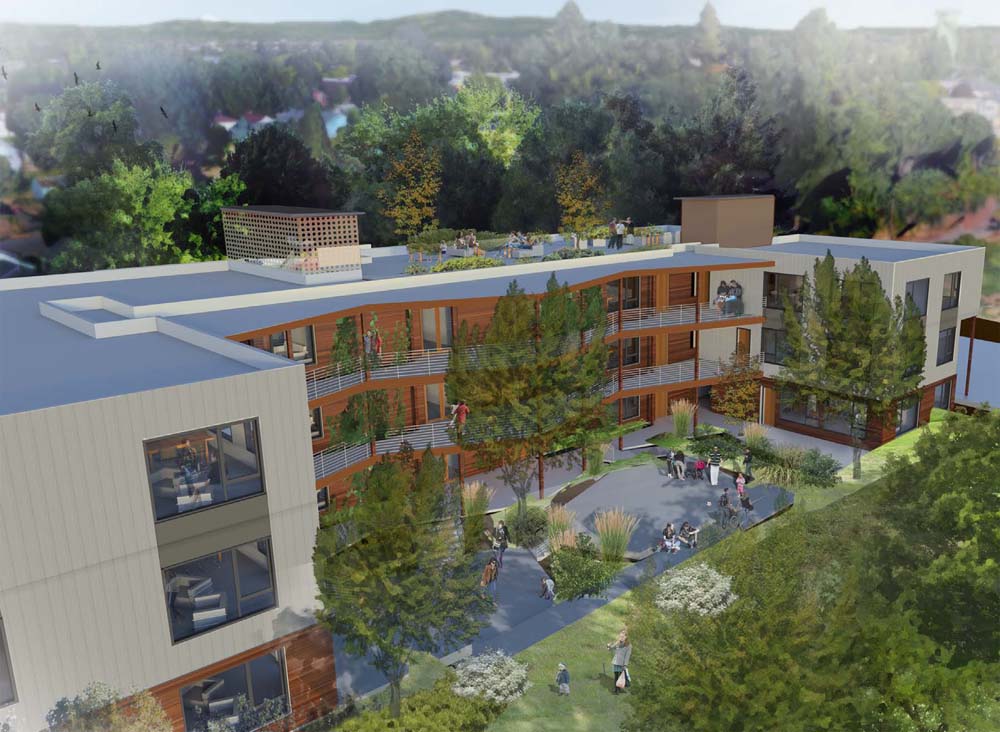 Several years ago as Alicia DeLashmutt unexpectedly faced her own mortality, her mind focused on the uncertain futures that her aging mother and her daughter, Neva, a young adult with disabilities, would experience if she were gone. Alicia ultimately realized this ordeal was a catalyst to create something that would outlast her, and touch lives that would outlive her. As a result, Alicia established the Our Home, Inclusive Community Collaborative, to provide people who experience disabilities, elders, and those below median income the opportunity and choice of building true, supportive community into their living situations. 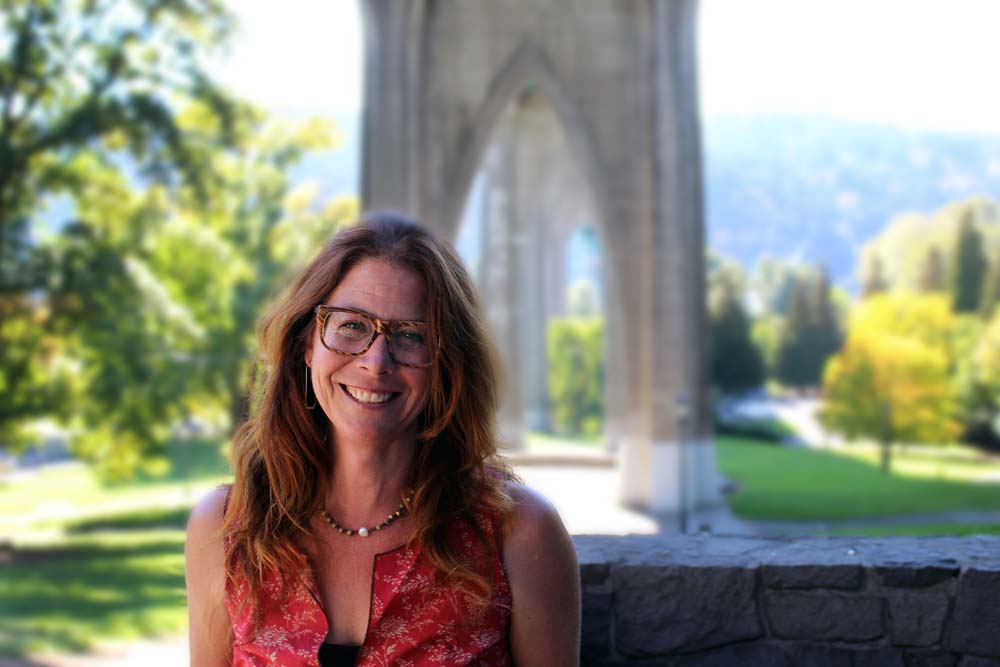 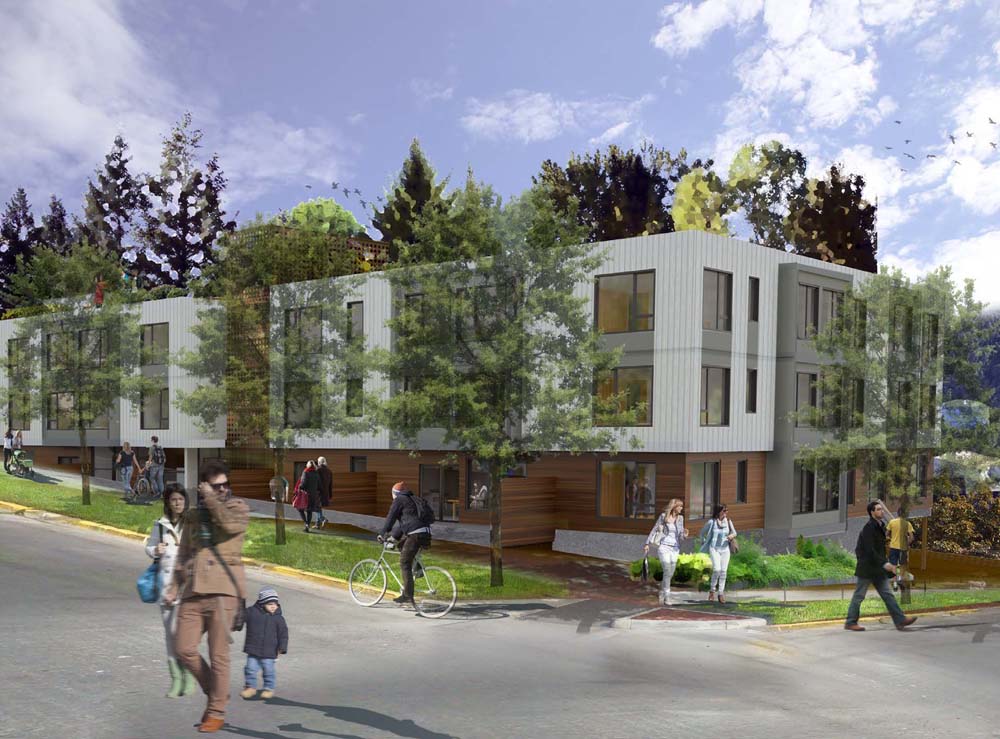 Our Home—Cathedral Park will employ Universal Design principles to foster accessibility throughout, including the central, shared courtyard.

With that in mind in 2013, Alicia formulated the vision that has become the Our Home, Inclusive Community Collaborative. Our Home’s mission is to promote, support and develop inclusive, diverse communities, and has led to the development of the Our Home– Cathedral Park project. This will be a new pocket neighborhood, based on the model of co-housing that will intentionally include individuals often seen as at-risk, people with disabilities, elders and people below median income. Alicia’s goal is to reduce the isolation and segregation often experienced by these individuals by creating a community that celebrates the gifts and strengths of each person, contrasted with deficits and needs that often become the defining factors in today’s housing. This unique, inclusive and diverse collaborative housing type is the choice that she believes, “many are searching for.” 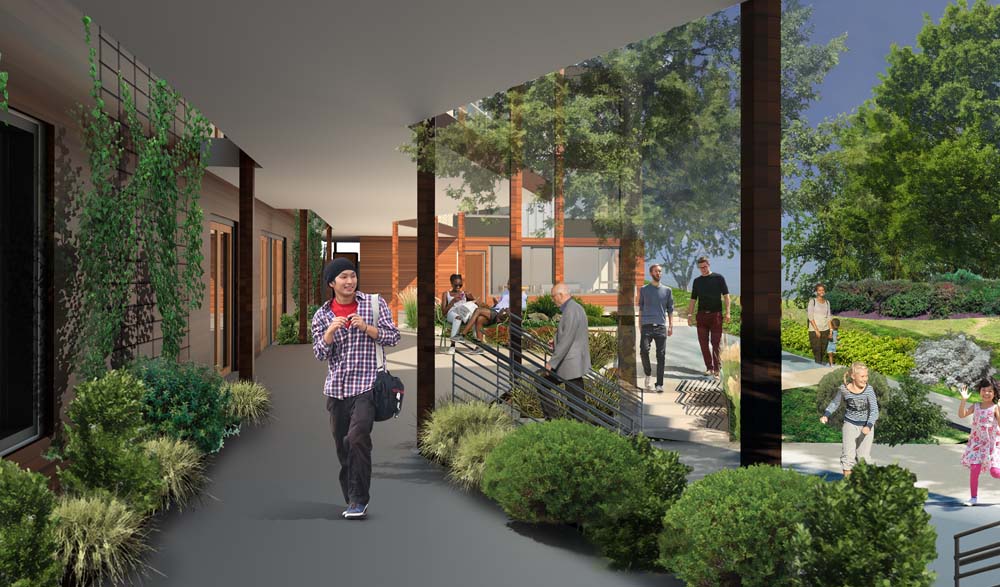 Co-housing is not a new concept. Its origins are rooted in kibbutzim, a Hebrew word meaning gathering or clustering. The first kibbutz was an agricultural community formed in the early 20th century by Jewish people in search of a more connected life. A more modern version of co-housing emerged in Denmark after a newspaper article titled “Children Should Have One Hundred Parents,” prompted a group of 50 families to organize around a community project in 1967. Co-housing came to the United States the 1990’s. There are now over 160 active co-housing communities in 25 states and more than 125 new communities are in process.

Each co-housing community organizes around a shared value system and brings together the value of private homes with the benefits of sustainable living, enhanced by shared spaces and facilities. Residents actively participate in the design and operation of their community, and share common facilities thus creating a strong connection with neighbors. 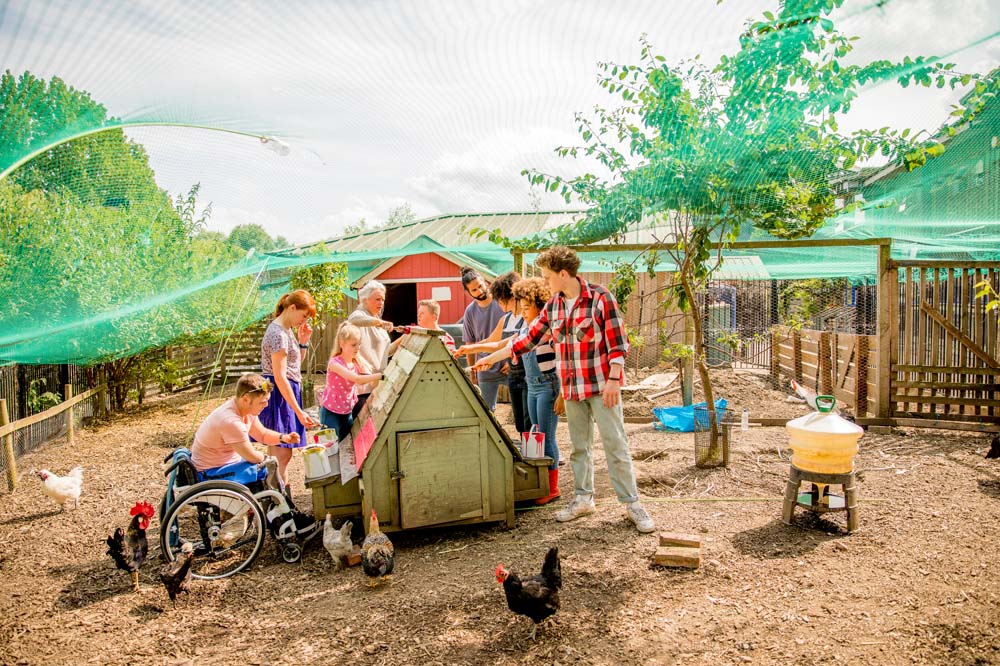 Alicia’s 16 year-old daughter, Neva, a lively and engaged young woman, experiences a rare genetic syndrome and requires assistance with daily living. Neva holds the distinction of being one of a handful of children in the United States, and one of only 200 worldwide, to be diagnosed with Mowat-Wilson Syndrome (MWS). This rare genetic disorder affects many systems of the body with symptoms including intellectual disabilities, distinctive facial features, delayed development, and Hirschsprung’s disease.

Planning for her disabled child’s future, a reality shared by approximately one million parents nationally, is a priority for Alicia. Yet despite 1 in 5 people experiencing disability in their lifetime and the progress being made with inclusion and anti-discrimination laws, Alicia has faced barriers and institutionalized thinking since Neva was born.

“People who experience disabilities are a part of the natural fabric of our society. But because we often don’t personally know someone who experiences disability, we may see a person in a wheelchair or meet someone with an intellectual disability and react to them as an unknown, as uncomfortable, as ‘other,’” she says. “Fear of the unknown perpetuates the societal tendency to isolate and segregate those most vulnerable and feeds the antiquated perception that people that experience disability should be taken care of by someone else. Our Home seeks to change that attitude by creating communities where everyone shares what they can give. Those gifts may look different from person to person but we all have ways that we shine.”

In 2000, the State of Oregon closed the Fairview Training Center, the state institution for people that experience disability. “If I was born with my daughter’s disabilities in 1965, my family would have been encouraged to ‘give me up’ and place me in the state’s care. It was a medical model that said, ‘we are the experts and we will take care of these children, you don’t have to and you can go and have another child instead,’” explained Alicia.

When Neva was born, Alicia and Neva’s father heard exactly that from an older parent, “You don’t need to keep her. You can try again.” She said it was one of the hardest things they ever heard as Neva’s parents. Alicia emphasizes, “I love my child no matter what. She is part of me. She has an inherent right to be in this world and brings with her special gifts and strengths. It’s our job to discover those unique things that bring her joy and make her shine and foster them, just like any other parents.”

If you think about how a lot of our communities are put together now, it’s about how to provide privacy, or keep people separated instead of bringing them together. The architecture of Our Home–Cathedral Park is designed around bringing people together. 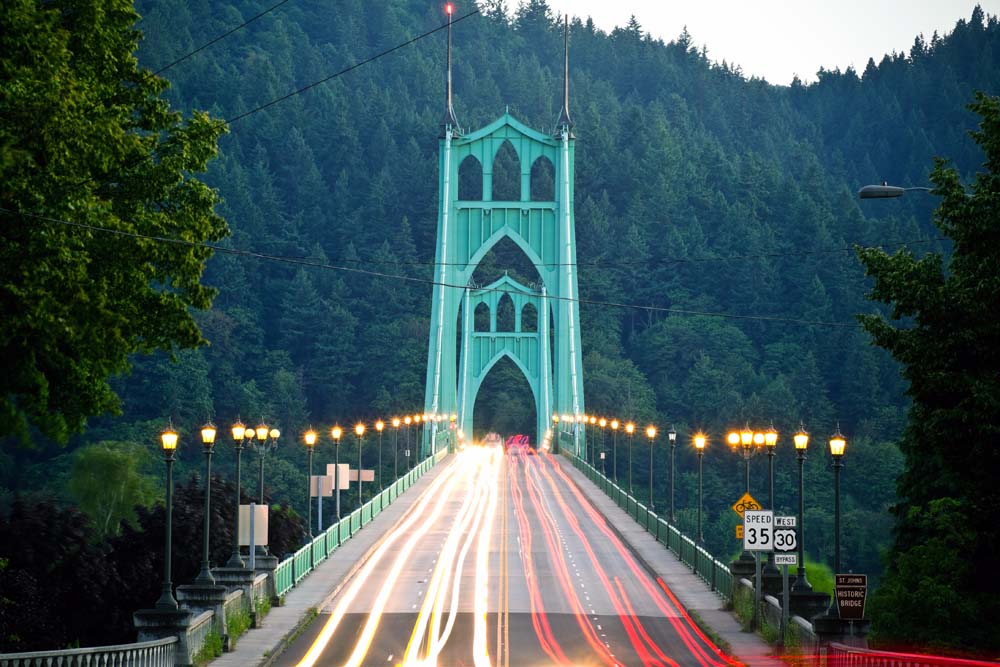 Traditional housing options aren’t meeting the needs and wants of our senior population or people with disabilities. “People want choices. They want an option to live in a community where people care about them, not just get paid to care for them,” Alicia adds. While she has worked for the last 15 years with school systems, communities and other families to address and overcome the low- expectations surrounding people with disabilities, her motivation to start Our Home, really solidified five years ago when she found herself in a life-threatening situation.

“I was researching assisted living options with my mother and unexpectedly became very ill. I was admitted into the hospital and under medical care for several weeks. After leaving the ICU, I was told that I had experienced a close call and that I was very lucky,” she explains. “I realized from that experience that things can change drastically at any moment and that I should not only be considering my mother’s future need for care but also my young daughter’s. The Our Home concept started with the primal need to make sure my child would have the connected and fulfilling life that she deserved. But it quickly grew to include all families that have the same driving desire. I had to find an alternative that would allow families to look to a hopeful future rather than being limited to keeping their child at home until they were too old to care for them or surrendering their children to institutions, group homes or foster care. I want Our Home to try to educate and win over the hearts and minds of people around the possibilities for and value of people with disabilities as a part of our communities.” 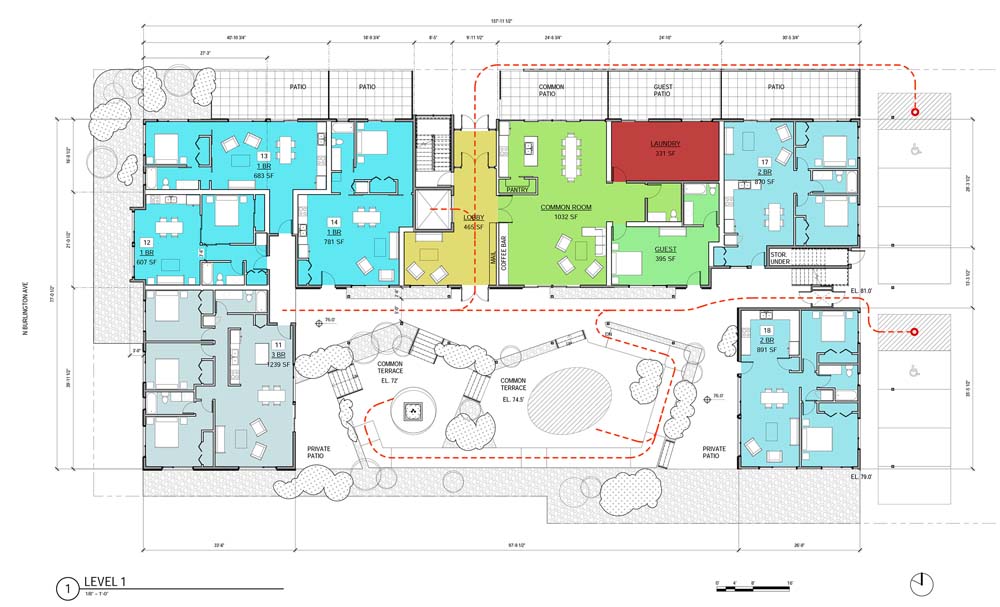 The design of Our Home—Cathedral Park supports its community of neighbors by providing an array of public, semi-public, semi-private and private spaces.

In 2015, Community Vision, Inc. , Oregon’s largest provider of individualized support for adults and youth experiencing disabilities, purchased a half-acre site in the Cathedral Park neighborhood near the St. Johns Bridge, in Portland. Community Vision is holding the land for Our Home’s first development, Our Home–Cathedral Park, and both Community Vision, Inc and Proud Ground, the local land trust, will help to provide subsidies for several units that will be kept permanently available for families and individuals below median income.

Designed by the Seattle, Washington, architecture group Johnston Architects and developed by the Portland development group Urban Development + Partners, Our Home– Cathedral Park will be a 22 unit accessible, condo community. Units will range from one to three bedrooms of approximately 600- to 1,400-square- feet. As a former commercial interior and landscape designer, Alicia wants to create a functional and beautiful space based on universal design principles that encourages a social, communal environment, yet retains privacy.

“If you think about how a lot of our communities are put together now, it’s about how to provide privacy, or keep people separated instead of bringing them together. The architecture of Our Home–Cathedral Park is designed around bringing people together,” says Alicia. “The way that we will move through the space will bring us in proximity to each other and that is very much on purpose. This is because if I see you, I know you. And once I know you I cannot deny your value as a human being in my community.”

Features are designed to allow short interactions with people every day and longer interactions on a regular basis and include break-out conversation areas, a large communal kitchen and dining area, shared laundry, guest room and a spacious shared courtyard. Daily interaction is not only encouraged but it is essential for this community model to thrive and succeed.

The Our Home team is seeking future neighbors that would like work together to create this first community by purchasing a unit or individuals and foundations interested in helping raise $1.6 million in the next 18 months to assist with pre-development costs and the subsidies for their affordable units. The total project is estimated at $9.7 million and the estimated completion date is late 2020.

WHEN WILL IT BE TIME TO REST?

The impact of a life-long need for advocacy, assistance and care among families of children with disabilities can be particularly acute and it has raised Alicia out of her comfort zone. “Being my daughter’s unflinching champion can take a toll. But I know it is the right thing to do. You can’t go crawl under a rock because of the challenges life presents. My daughter has gifted me with an amazing opportunity and focus. This is what I get to do with this life!”

But when will she know what she has been doing with her life is successful?

“Personally, it comes after my daughter and I are living together at Our Home –Cathedral Park, the community is functioning smoothly and she is known as an integral member. Then, when it comes time for me to move on, Neva will be able share her home with a paying roommate who does not experience disabilities, she’ll employ care providers to help her with her needs and have a larger community of caring people around her. She will have the full-life that she deserves.”

But the ultimate reward for Alicia isn’t just knowing that as she has helped to set up a life for her child, but that she has also provided options for other individuals and families that
are in the same situation. “Our Home–Cathedral Park is just the first of many inclusive and diverse communities. It’s a prototype that will be scaled and replicated and give more families this much desired choice in home and community.” She beams, then adds joyfully, “That will feel really good!”

Addressing Discrimination with the Americans with Disabilities Act

The Americans with Disabilities Act (ADA) became law in 1990, and was the first-ever civil rights law for people with physical and cognitive challenges. The ADA prohibits discrimination against individuals with disabilities in all areas of public life, including jobs, schools, transportation, and all public and private places that are open to the general public. The law was intended to bring about sweeping change, and in many ways it has done that. For example, more cities and towns have street corners with curb cuts, making it possible for people who use wheelchairs to cross the street and use sidewalks. But for this affected population, many large obstacles remain such as finding a job and welcoming housing. 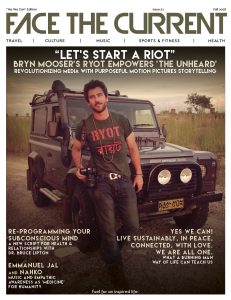 ♦ This article was originally published in Issue 21 of Face the Current Magazine, featured on pages 60-63. Order a print copy or subscribe to print at our SHOP.

The Feeling of Home: Reducing Isolation and Segregation for At Risk Populations was last modified: August 12th, 2019 by David Aiello

Spiritual Alchemy and the Power of Listening:...