Vamp Up Your Meals and Health With These 3 Powerful Herbs 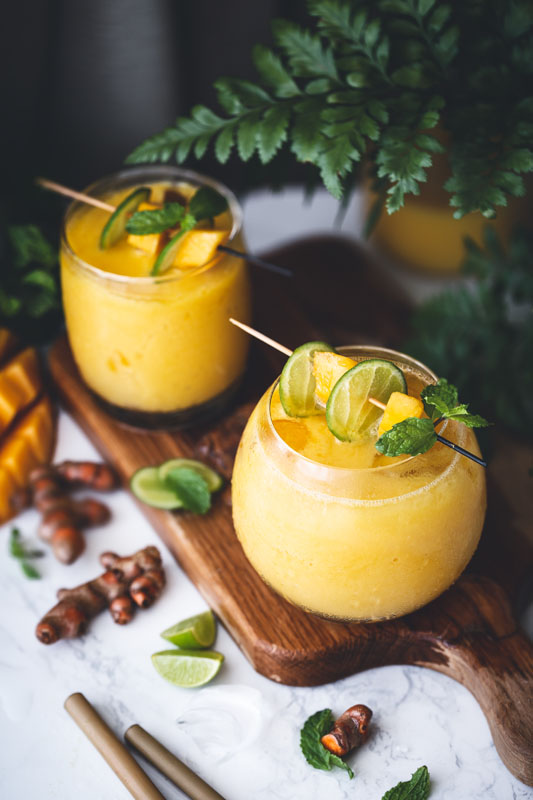 Herbs not only add extra flavor to meals, but they also deliver a wide range of impressive health benefits that will take your dietary health to the next level. Herbs provide an array of phytochemicals that positively affect our health and protect us from a variety of diseases.

Including fresh and dried herbs in drinks and sweet and savory dishes is a simple, cheap and delicious way to support good health.

Three super herbs that you should be adding to meals regularly are ginger, turmeric and cinnamon. Here are some creative ways to incorporate them into your daily diet to reap their many health benefits. 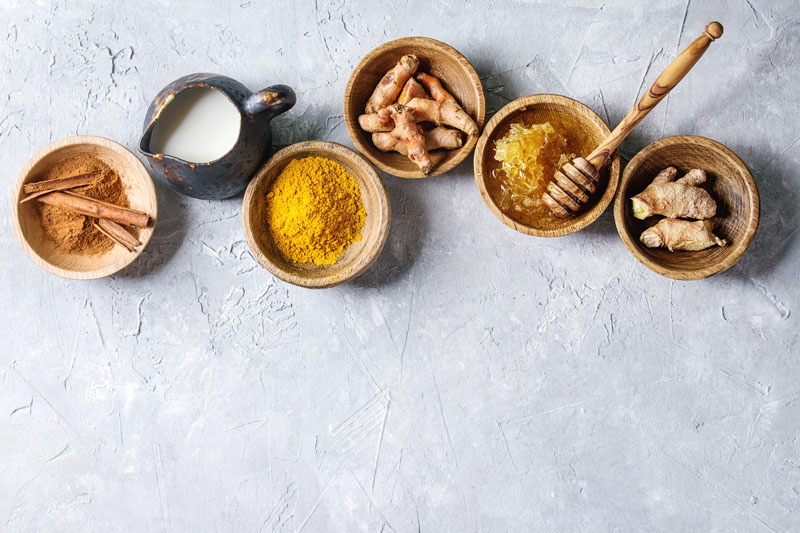 This Face the Current Health Feature is published in Issue 24 / July-August 2019 Edition.  Order PRINT here, SUBSCRIBE to digital membership for unlimited access to our content, or continue reading this article below. 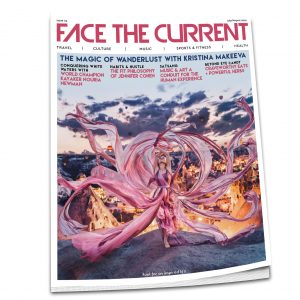 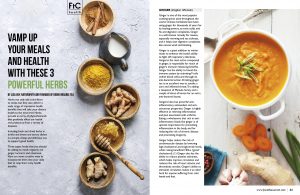 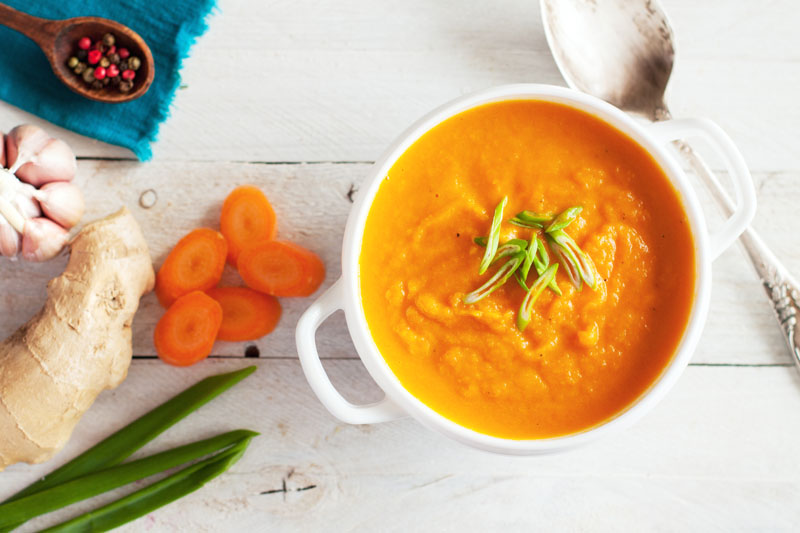 Ginger is one of the most popular cooking spices used throughout the world. Chinese herbalists have been using ginger for thousands of years for its healing powers, to treat colds and flu and digestive complaints. Ginger is a well-known remedy for nausea, especially morning and sea sickness, and it helps ease digestive complaints like excess wind and bloating.

Ginger is a great addition to winter meals to enhance the body’s ability to fight off respiratory infections. Gingerol, the main active compound in ginger, is responsible for much of ginger’s immune enhancing benefits. Ginger has the ability to boost the immune system by activating T-cells (white blood cells) and through its anti-bacterial action. Drinking ginger tea is an excellent way to soothe a sore and inflamed throat. Try adding a teaspoon of Manuka honey and a couple of slices of lemon for an extra anti-bacterial boost.

Gingerol also has powerful anti-inflammatory, antioxidant and anti-cancerous properties. Ginger is highly effective at relieving inflammation and pain associated with arthritis. Eating a wholesome diet rich in anti-inflammatory foods like ginger is of upmost importance for preventing inflammation in the body, and for reducing the risk of chronic disease and promoting longevity. 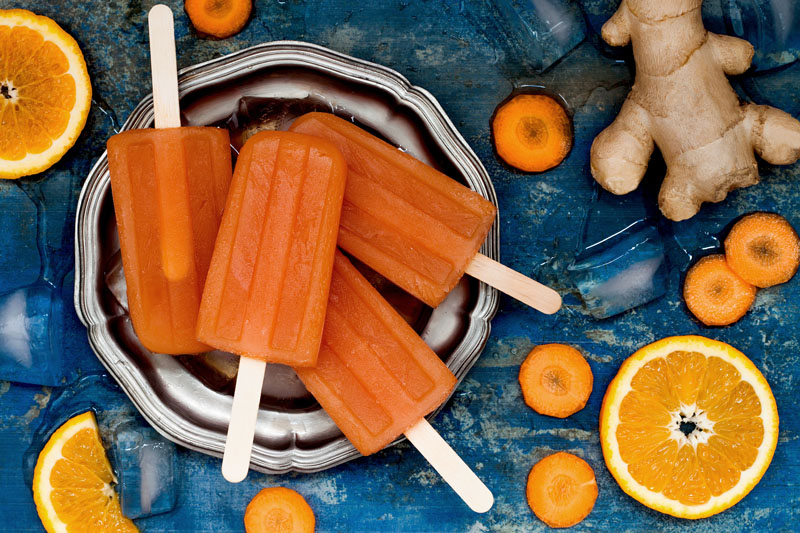 Ginger helps reduce the risk of cardiovascular disease by lowering high cholesterol and triglyceride levels, while raising beneficial HDLs (‘good’ cholesterol). (1) Ginger also has the ability to reduce platelet stickiness, which helps improve circulation and reduces the risk of heart attacks and thrombotic strokes. Ginger’s ability to stimulate circulation makes it an ideal herb for anyone suffering from cold hands and feet.

HOW TO SPICE UP YOUR MEALS WITH GINGER: 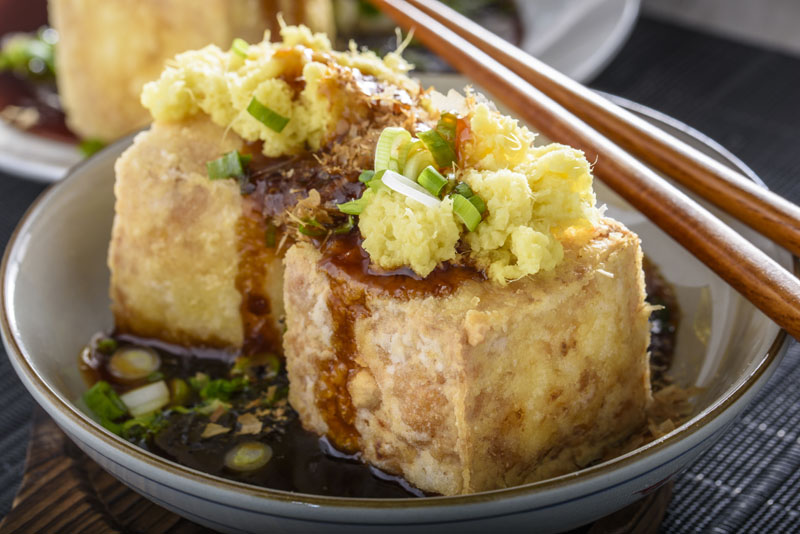 Stewed or poached fruit (berries, pears, apples, stone fruits) or rhubarb with freshly squeezed orange juice and grated ginger. Homemade chia berry jam or applesauce with ginger is great to have with toast, pancakes and waffles. 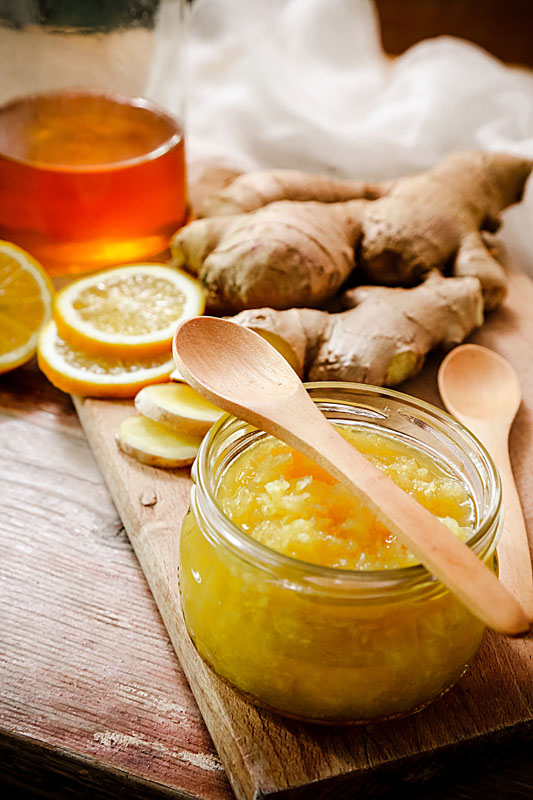 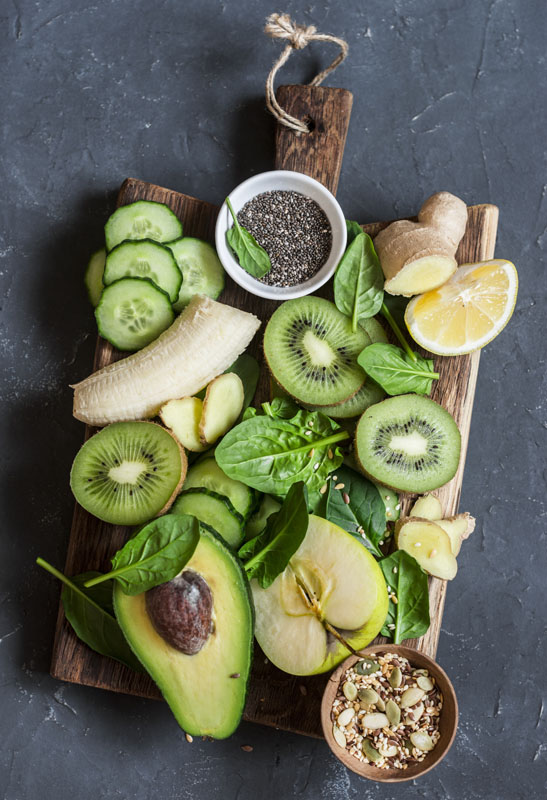 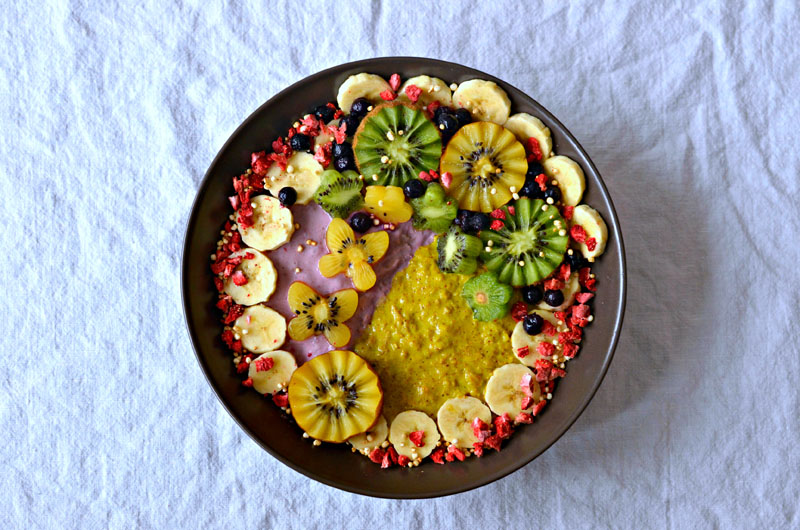 Turmeric has long been a much loved staple in Asian and Middle Eastern cuisine. This super spice, which is the main ingredient in curry, possesses many wonderful health benefits. Turmeric contains a potent antioxidant called curcumin that has been studied extensively for its ability to fight damaging free radicals in the body and for its powerful anti-inflammatory effect. Free radicals are one of the main culprits when it comes to the development of chronic diseases and premature ageing. Turmeric helps protect against cancer, heart disease and Alzheimer’s disease and is beneficial for alleviating inflammation and pain associated with arthritis.

Studies have also shown that turmeric can enhance brain function. Researchers have found a link between improved cognitive performance and the consumption of turmeric. A study indicated a lower prevalence of Alzheimer’s disease and better cognitive performance in Indian people who consumed curcumin in curry on a regular basis. (2,3) Turmeric also has a protective effect on the brain. Curcumin protects brain cells from free radical damage, which can help prevent neurodegeneration. (4)

BEST WAYS TO USE TURMERIC IN MEALS

Adding a pinch of black pepper with turmeric will significantly improve turmeric’s absorption. 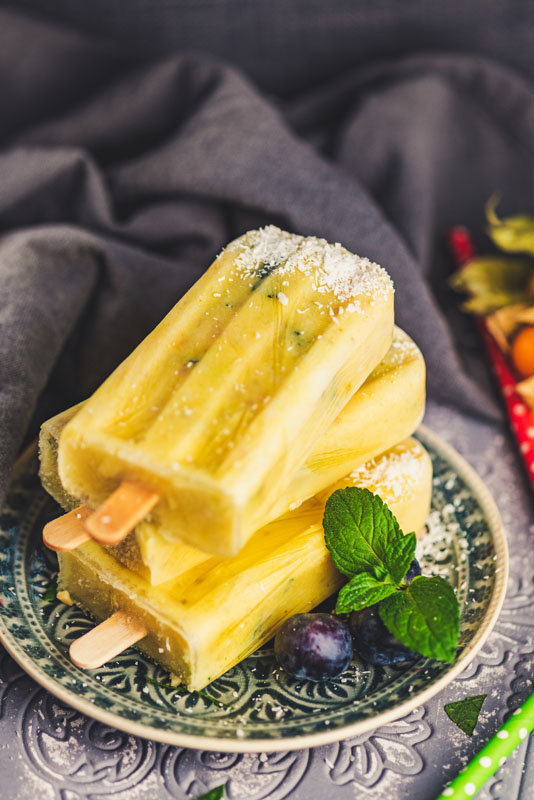 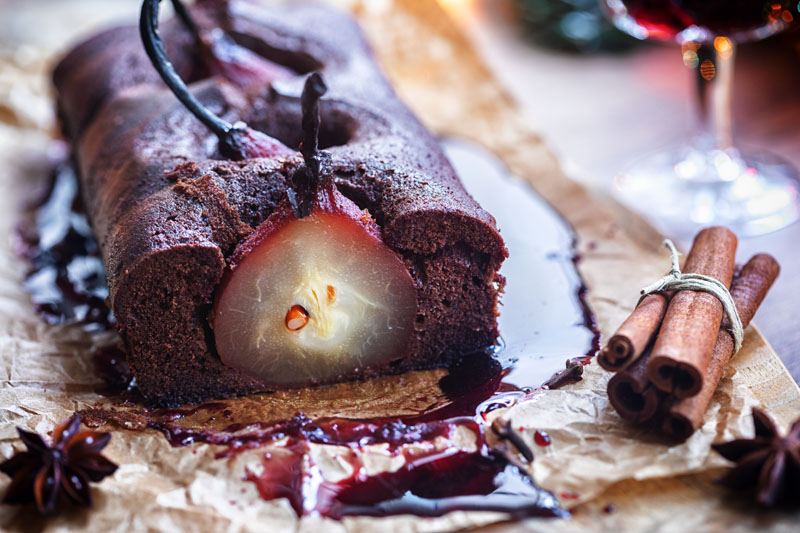 Cinnamon is a spice that has been used for thousands of years around the globe for its medicinal properties and delicious sweet taste. There are two types of cinnamon, Ceylon cinnamon (Cinnamomum zeylanicum), which is called true or real cinnamon, and Cassia cinnamon. True cinnamon is more expensive and has a sweeter flavor and scent compared to cheaper more robust tasting cassia. Ground true cinnamon is often finer and their quills are rolled in the one direction.

Cinnamon has been found to be extremely beneficial for keeping blood sugar levels balanced and for improving insulin efficiency. Cinnamon makes a great alternative to sugar and other sweeteners for diabetics. Adding just 1 tsp of cinnamon to a meal can slow the rate the stomach empties by around 37%, which significantly slows the rise in blood sugar levels. Even less than half a teaspoon daily can reduce blood sugar levels in people with type-2-diabetes. (6)

Including cinnamon in the diet can also notably reduce risk factors for cardiovascular disease in people with type-2-diabetes. A study showed that consuming between 1 and 6 grams (around 1/3 – 2 teaspoons) of cinnamon daily may lower triglycerides levels by 23-30% and total cholesterol by 12-26%. (7)

Cinnamon is a great source of glutathione, which is one of the body’s major antioxidants needed for good health and prevention of chronic diseases like cancer and heart disease, and premature aging. Glutathione is required for maintaining a healthy immune function and it helps protects us from environmental toxins. Cinnamon also contains anti-inflammatory compounds that can help prevent chronic inflammation that plays a major role in the development of various neurodegenerative diseases including Alzheimer’s disease and Parkinson’s disease. (8)

Cinnamon has been used traditionally in Ayurvedic medicine to support the immune system. It has anti-microbial properties that can help fight off colds and flu, and prevent the growth of candida, bacteria and fungus infections.

Cinnamon is a useful remedy for digestive complaints like excess wind, diarrhea and nausea.

Cinnamon is also useful for enhancing circulation. Cassia cinnamon contains high levels of coumarin, which is a compound that has a blood thinning effect. People taking blood thinners like warfarin should limit their intake of cassia cinnamon for this reason.

BEST WAYS TO USE CINNAMON

Stir 1 tsp of cinnamon powder in warm almond milk with a little raw honey. Cinnamon is a main ingredient in masala chai. Spice up your next hot chocolate with some cinnamon. Add ½ tsp of cinnamon to your coffee before brewing, or use it to sweeten up your next smoothie. 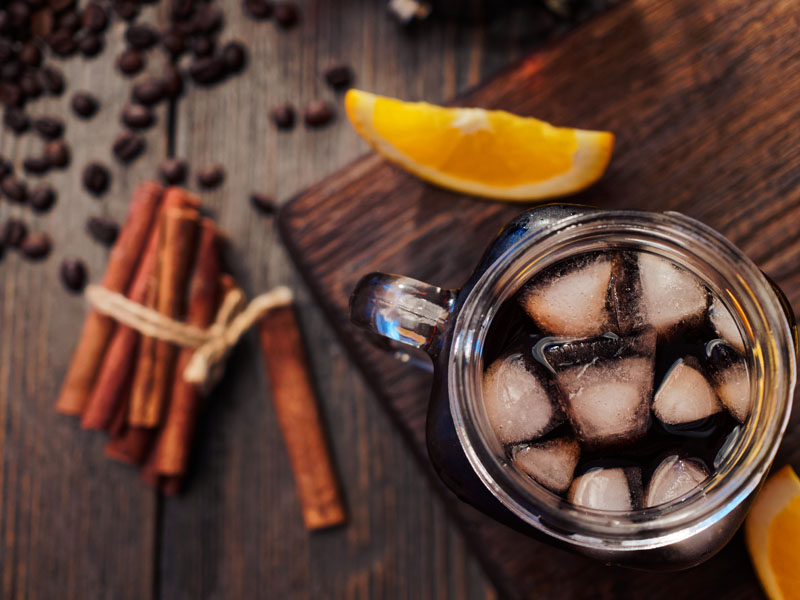 Spice up your morning oatmeal, Bircher muesli or chia puddings with a teaspoon of cinnamon. Make your own healthy granola sprinkled with cinnamon. Add a stick of cinnamon when poaching pears. Berries pair well with cinnamon. 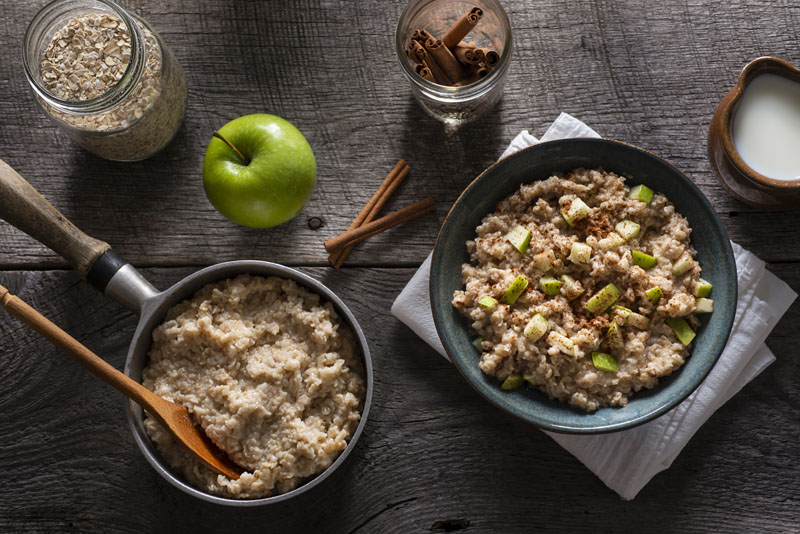 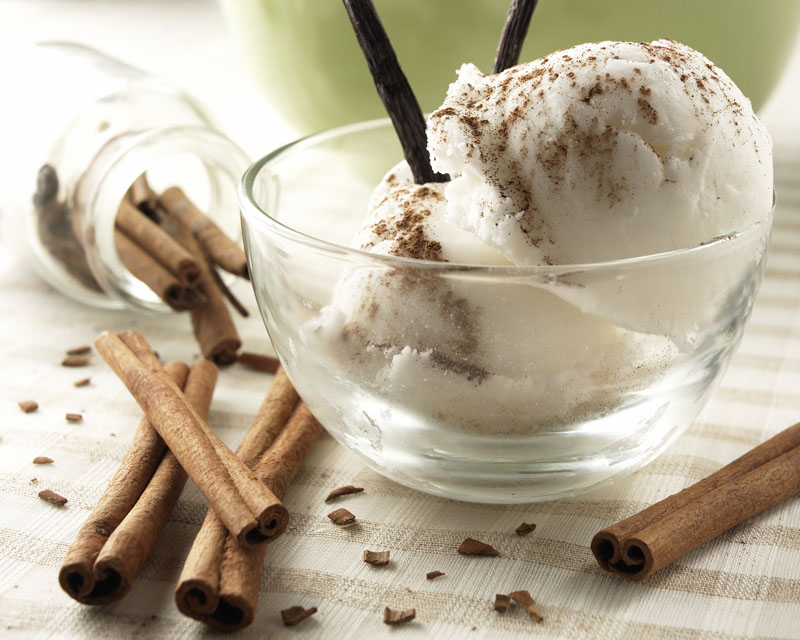 Broaden your cooking repertoire and have some fun in the kitchen experimenting with new recipes using these outstanding herbs. Including ginger, turmeric and cinnamon regularly in your diet is an excellent way to make meals more flavorsome while boosting your health and reducing the risk of disease.

Vamp Up Your Meals and Health With These 3 Powerful Herbs was last modified: September 18th, 2019 by Lisa Guy

Limitless Self-Love in The Great Outdoors With...

How the Magnesphere Brings Balance & Tackles...

Sharing Our Light to Change the Current

Four Keys to Success in Running Your...